I miss things (and.. BUSTED)

(Bonnie over at http://organicdiscourse.blogspot.com/  caught my mistake on the Truck Grill, Bonnie said, ‘That is an International Truck Grill’ she is right!)

I read a silly saying once: Of all the things I have lost, I miss my mind the most.

A good chunk of my life was spent in the military. Once I was away from the camaraderie, I missed it for a few years.  There is a tie there, that is hard to break. I still have a couple guys and their wives we see occasionally, and tell stories. But I don’t miss it quite as much as I did.

I entertained kids for many years. That was such a joy. Teaching and using several medium to accomplish the job. That I had to quit because of my hearing. I miss the kids and interacting. Not many things are sweeter than a kid seriously talking. I love to watch Stella talk, she still doesn’t realize completely that I cannot under stand her. 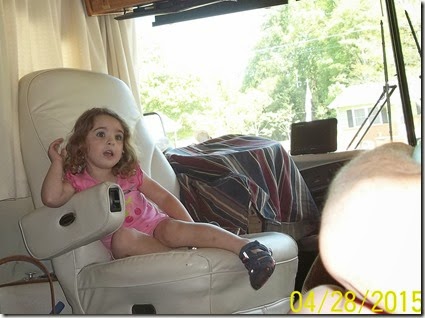 I caught one of her talking to Sherry. She was so seriously animated.

I had a few years as a Roach Coach driver, It was interesting but I did not miss it at all.

Now, I have been retired from General Contracting many years, but I still miss building. Playing with the Lean-to gives some outlet, but down the street houses are going up every day, some of those should be mine, at least one (I think!

When I was building we guaranteed a home in 99 days. I smile when I see a house turned out now  in 50-60 days, techniques have changed, AGAIN.

A few days ago Sherry and I walked thru the new development and I spotted some roofers who were using coiled nail roofing guns. I had a case of them in my way.  I asked if they wanted some nails. Of course they thought I was trying to sell, but I told them I had a case of coiled nails I had no use for and I would bring them back. 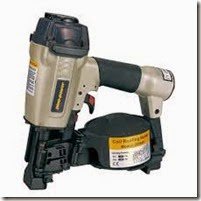 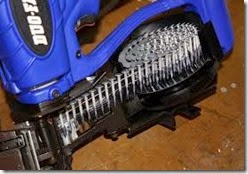 This particular case of nails sells for $40. I am not going back on a roof, and they were glad to get them. (truth known, I guess I just wanted to feel part of a new house. It did smell good, lol) 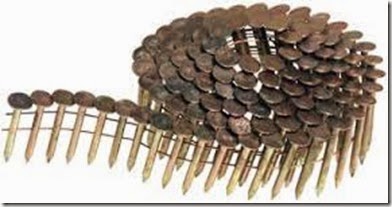 The nail gun is pneumatic and very fast. The nails are wielded to  wires and coiled.

Anyway, yeah I miss it, I was a working contractor. I loved to drive nails along side my crew.

Who knows, maybe Sherry will let me build one more. huh babe?

I don’t know if I could just be the Boss and not work, but I could try! 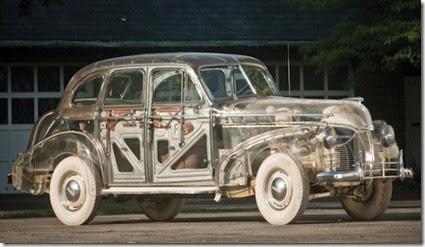 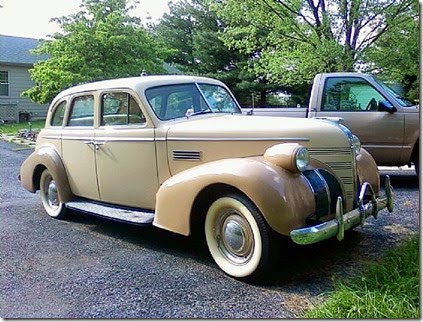 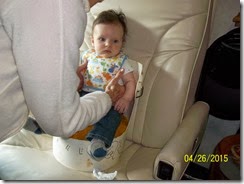 One thing I know for sure is that life is full of changes and the things we miss are very often replaced with new things to delight in and enjoy. We can't miss out on the blessings we have today thinking about what we miss about yesterday. Knowing that you love to build things, I'm sure you'll find something new to do.

Just caught up with the past few days of the Shipslog. OH MY, how amazing what's been accomplished with that storage area. It looks like a daunting job, but what a great concept -- love the truck grill!!! That Stella is absolutely adorable and Jude a handsome dude, how wonderful y'all have some time together!

Love the picture of Stella, she looks so serious. I wonder what she was telling Sherry. Yes I think you should build one more house and build it the way you and Sherry want everything.

I can't type anymore without making
mistakes. Stella can carry on a
good conservation. Jude is also
a cute baby. You don't need to build
another house you have lots to keep you busy. You need to take it easy we are getting older and the only two left to keep things straight.

Loving this picture of pretty Stella ... oh my, those eyes!

Jude doesn't look so sure of that bucket seat. Give him a couple weeks! :)

Now I don't know the first thing about nail guns, but I hope those roofers learned a thing or two today; that there's still a lot of good-hearted people out there. Maybe one will pay it forward someday.

Stella is adorable and was that Jude going in the bucket seat? Lots of memories you have, Jack, of the various work you did :) Maybe you can sign on with a crew making a house for one or two days :)

That was nice of you to offer the nails. I understand that need you had to be part of what they were building. Maybe's it time for you and Sherry to build one of your own, again. Stella is a sweetie-pie.