I have heard some drastic statements by folks, concerning ‘other folk’s problems.’ One I have heard often is, “I would never take Chemo, it seldom works and the discomfort and quality of life just isn’t worth it.”  I remember a sweet woman, Juanita Carter, who explained it well concerning the cancer that she had endured. 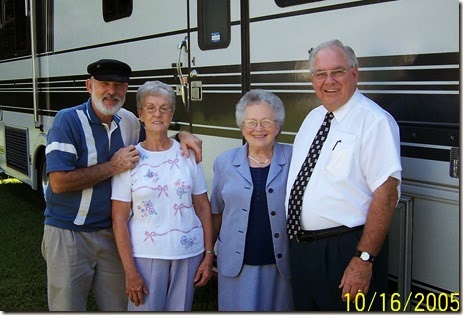 Juanita and her hubby Bishop Wayne Carter as we prepared for out trip to the Katrina devastation.

She said, “When the doctor says life or death, you will pick life.”  She chose to do the Chemo and lived. She appreciates life.  Now she is facing another of life’s demons, something is slowly trying to steal a wonderful woman’s memory.

I had a friend named Wacker Carver.  Have you ever known anyone by that name, I surely had not. But I got to like old Wacker. He was one of my first ‘crushes’ (Martha)’s uncle. 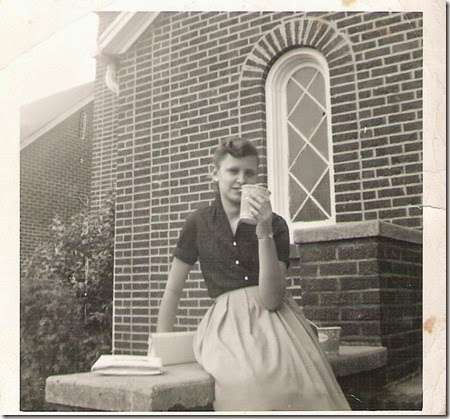 Martha, the first of our teen crowd to pass away.

I talked to him last, not 100 yards from where I sit now. We moved here and I had bushes to trim and cut. I said, “Wack, I have never done this before, but this time I am going to cut the bushes and leave them for the city to pick up.”

Wacker laughed, “Jack, you ain’t in the city, the city limit is about 150 yards up this road.”  Shucks.

The last time we talked was just before our yearly trip to Florida. He said,”Jack they said I needed dialysis or I would die. I had a sister who took it and it did not help, I will never take it.”

I told him, I did not know if it was a good idea to turn it down, maybe try it for awhile. He said “Nope, not going to, never.”

We left for Florida soon after that, clearly thinking Wacker would reconsider, but he did not; and true to the Doctors words, he died soon after we left.  I didn’t know whether to admire him or be mad at him. He was a good neighbor and  they are hard to find.

I miss Wacker and his great dry wit. I wish he had taken the dialysis, but we all ‘sit on our own bottoms’, as mama said.

Sherry and I remind ourselves every once in awhile, “NEVER SAY NEVER.”

I leave life and death decisions to the one’s who are facing them. They sure do not need my uninformed medical advice.

I loved the ‘55 Chevy.  I wanted a two door hardtop or even a two door with a post. But what I got was this four door 6 cylinder. 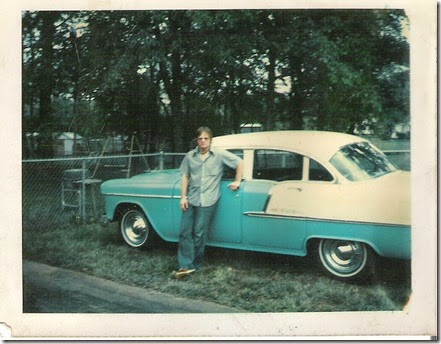 Above is Marty, Jack Jrs best friend and the ‘55.  Below is Sherry and Mark on the ‘55 not long after I bought it. 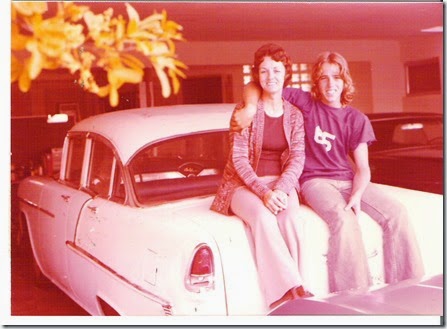 Wacker is an interesting name, makes you wonder if it was a family name or something. I have not heard it used as a first name. He does sound like a good neighbor.

I agree with you about making medical decisions; it should be the one that is directly impacted that makes the decision and then they should not have to justify why they made this or that decision. The sticky gray area is when someone doesn't have that capacity due to dementia or other issues and someone else has to make the decision for them.

I hear chemo can be brutal. I'm not sure I would like being in a dialysis chair 3 times a week. However, I'm 57 and would probably choose both if needed. At 85, I probably wouldn't.

Yep never is what you usually end up doing so I try to never say it.

Love the picture of Sherry and Mark on the car.
$50 sounds like a good deal. I think I know what you mean by basket case, though.

When it comes to dying I figure we don't get to make that choice. We may prolong or extend it to a certain extent, but I think I'd weigh the side effects carefully and prayerfully. Like you I''d never tell someone what to do, I only hope that I would know what to do if the situation would come my way.

Grover had colon cancer and surgery on January 4th, 1999. He had Chemo treatments for 6 months and 29 days of radiation treatments so we never know if it will help, are not since he hasn't had any more problems with the cancer. I think it hope him. I for one don't know if I would or not, but I want say I want.

I'm sure hoping Tom story has the same sweet outcome as Jean's Grover!
Even with their amazing knowledge, I suppose doctors and researchers alike are still 'practicing.' (Pun intended.)

If someone is truly in his or her right mind and feels at peace with their decision, I think their friends and loved ones should support it.

In the end, it's all in His hands!

Your friend sure had an interesting name. Never heard it anywhere else but here. I think when one is faced with a life and death situation they have to come to terms with it and do what they deem best for them, even if others disagree.

There are a lot of things I'd prefer not to do, but after the health issues we've faced with my wife, I've come to understand that there is little we won't do to make it through.