Do you do the speed limit or follow the flow?

On today's interstates (and some federal roads) I feel as if I will be run over if I do the speed limit.  BUT 90% of the time I am 5mph below if the speed (demons) have a lane to pass.  It is easier to drop some mph in the motor home than the little Honda Fit we have. So at times in the fit I will speed up to get out of someone's way.

Do you state your opinion when it is contrary to the folks present?

For me, it is according to the 'atmosphere or attitude'.  If the attitude is aggressive or argumentative, I will keep silent, although I now silence is considered consent.  At times this has cme back to bite me when the person says if the presence of company, "YOU know how WE feel about this!"  Ouch, then I start to skirm.

A more pleasant subject, grand kids. (great grands count too).
The first 'grand kid' wasn't born into the family,  Corey ( a super dude) came into the family with his mom, he was 4 or 5 so I did not see him in the 1-2-3 year eras. Joan and Dick did and I think he stole their hearts.

But then came Ben. I got to see him from about day 3 on. At 6 months he was beside me in the p/u going to work. I had bottles of milk and food lined up on the seat. No car seats then.  Every new thing he did thrilled me. I know grandparents remember the first steps (or near that) what a kick.

Now I am seeing my sons and their grands. I smile because I REMEMBER.  Jack Jr. wasn't around his first, Elsie Mae. But he sure smiled when I mentioned her name.  But now, there is Jude (the dude) the grand he can visit ans spoil. (Again I think Of 'me 'n Ben, or first)

Mark makes regular trips back to NC to see Stella.  Of course I think! 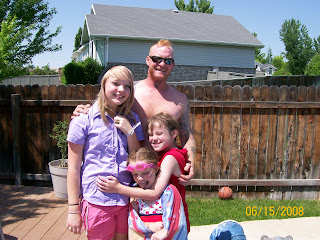 Corey grown with three of his beauties. 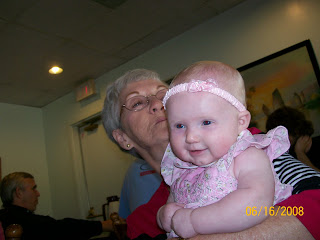 Then there is Ben's Elsie Mae 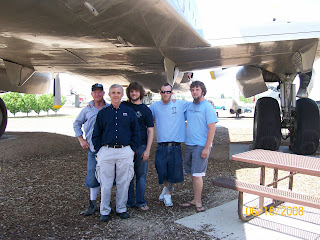 Jack and his four sons grown. 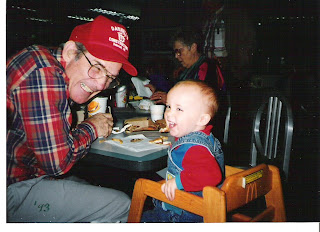 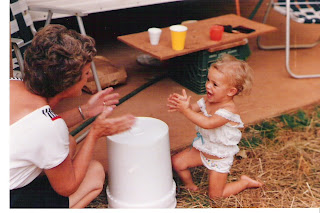 (Grandma and her favorite, the only Grand daughter, Mar's daughter Sherece.)
I can't think of great grands, because I have several I will probably never see again.  Getting too old to travel across country. There are draw backs to our life style. Family is scattered.  There are times I envy you guys who have 'stayed put'.  Some of you can see all of your family on a monthly basis. How great is that?

PS: Now I will try to upload a picture. I ould only get pictures from Picassa, and I missed Luke Vegas. 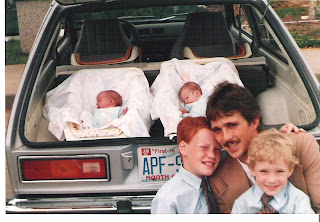 Above is Josh and Stephen (twins) and Corey (red hair) Jack Jr and Ben foreground.  Jack and OUR 4 of our grandsons.
Posted by jack69 at 11:55 PM

Those are some really cute kids Jack! Dont feel bad or envious. I have 3 nephews that live 20 minutes away and Never see them! Their mom has turned them against the family for some reason due to marital problems. It puts much pain on the Grandparents.

Keep poking down the hwy , just dont leave the blinkers on!
Lisa

I don't drive much these days, but I usually go with the flow otherwise it seems like someone is riding my bumper and that bothers me a lot. We did move closer to be by grandchildren, I sm thinking we will just have the two, the little one just born and the daughter that came along with son's wife. They are fun to be around, so I am glad we made the move.

I honestly can't recall a time I wasn't leery of excessive speed. Even in the 'glory days' when I tooled around in a Sports Car, folks thought I drove like a 'little old lady.' Bothered me, not.

You've sure a beautiful family ... thanks for sharing them with us!

Beautiful family. Have you heard of that grandparents scam? I got that call last week. I knew they were getting ready to ask for money and the phone went dead. They either chickened out on their scheme or the phone cut out.

Grandchildren are the greatest gift. ENJOY yours when you get to see them. Our family is scattered too.

Children and grandchildren are a blessing. Many of mine are scattered too but I do have a few close to home. I don't love any of them less than the other because of that and am thankful for all of them.