Wondering?  What does that really mean? Thinking hard? Trying to 'figger' something out?

There are serious things to think about as you age. So I am wondering, "How does one know when they are too OLD?"

I am thinking of driving. My brother-in-law's mama drove into her 90's. She said, 'When I fail the test, I will not try the second time, I will give it up."

Friend Bill drove well into his 90's, I cannot remember him having an accident.

I had close friends, ten years my senior, That scared the daylights out of me driving. Slowing down to 25-30mph when they were talking and speed up to 50mph+ when they weren't.  I cringed, feeling someone plowing into the rear of the car, it did not happen. (What is scary, I am the age they were then!) 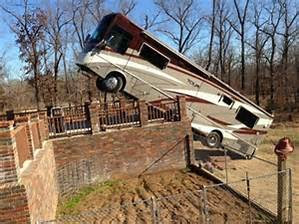 For the most part, I feel comfortable driving the motor home more so than the car.  But, but I did hit the RV port as I was backing in a couple weeks ago, not a good sign. 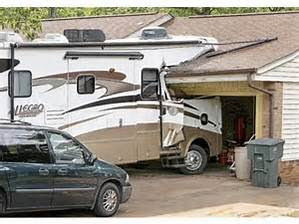 But I did not do this bad, he could not get it in the garage!

We have seen a lot of crazy things while driving the motor home. When we first started, very young, in our late 50's, I laughed inside at the silly mistakes of RV'ers, UNTIL, UNTIL it started happening to me.

What I have witnessed:
A motorhome leave a site still fully hooked up. He broke the park water line and shorted the electricity and scattered 'crap' for 40 feet. 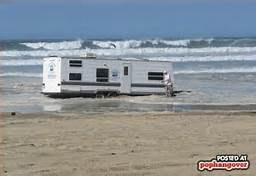 (If you are going to the beach, never park at low tide!)
We see RV'ers going down the road with TV antennas up, steps out and compartment doors open.

One Motorhome drove off with only the safety chains hooked on the tow car, the hitch was not 'hitched'. The car wandered back and forth and finally hit the MH when he stopped. 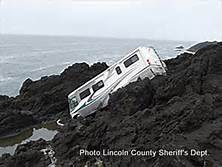 (I think this is too steep for the best levelers!)
The incidents above were not age related, many of them were young folk (less than 60 (smile)). Those were caused mostly by haste or just not paying attention, being distracted. 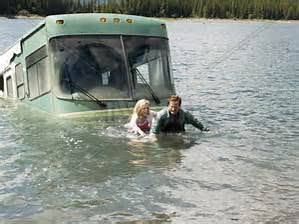 (They meant to launch only the boat!)

We all (growing older) must make the decision WHEN to turn in our driver's license.  For some it is done logically, others refuse to admit it. There was a special on TV years ago interviewing an old man in Florida. When asked if he would quit driving his answer was a nasty, "Hell NO! what are they gong to do to an Old man?"

I hope it does not take an accident for me to realize it is time, I also hope I have sense enough not to endanger you or anyone else on the highway. SO I WONDER?  WHEN?  WILL IT BE TOUGH?  YEP, I WONDER. 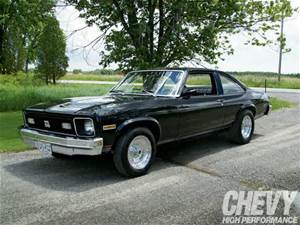 I have noticed in the last 6 months I am not as aware as I use to be.
I have to look two or three times before pulling out. You know where
North Street turns off Central. I have seen 2 accidents there in the last month. It is 4 way traffic. They need the stop light there and not up there
where the road dead ends. Its probably because the construction of the 2 houses that does not help.

Jack I wish I could tell you, but I really don't know. I guess we will know when we get to that age I hope it’s not soon for me, I'm the only driver here. Grover hasn't drove in around ten years, he knew when he didn't feel safe driving, but he's a good back seat driver. Take care Jean

I remember back in the day when my Father-In-Law gave up his driving. He had just turned 80 and felt the time had come because he did not feel comfortable driving anymore. was worried a mistake he might make could hurt someone.

I seen an RV's awning fling out while going down the hwy. I seen a camper go up in flames on the campground as a result of grilling to close.
Like I said before, keep traveling until you reach where your going.

We are only old once.
Lisa

Good entry and lots to think about. John drives me crazy with the back seat driving.

As I mentioned before, hubby's dad under no conditions was going to give up driving, even when advised by physician that he do so. I prayed a lot that there would be no accidents. Thankfully, he became too sick and debilitated to drive and stopped driving on his own. It is something of independence that people fiercely cling to. Personally, I realize I am not comfortable driving on freeways any more, so I don't. If I can't get there by back streets or have hubby or someone else drive me, then its not going to be likely I'll be going there.

I think the wisdom is if several people have been concerned about one's driving, then it is probably a good time to think about not driving any more.

Why, I think you (and Sherry) are not unlike Peter Pan ... you'll never be Olden! Like those 'other folk', that is!

I'd an uncle in Florida who nearly killed himself (and gosh knows how many others) ... trying to merge on a freeway via the off ramp. Crazy.

Well, from what I usually hear, it's someone else (a daughter or son or the government) that ends up making the decision, probably later than it should be made. I guess if you know you are apt to making more mistakes, one would need to take greater care, look an extra time, take safer routes with less maneuvering and more right turns instead of left (ha, meaning rearrange your errand schedule according to right hand stops) and then looking for lights to turn at instead of across traffic. I'm thinking it's not the seniors that are having problems driving but the rest of the crew that won't get off their phones, right?

I've already given up on driving long distances, especially if by myself. I tend to nod off and once found myself going to the side of the road. The rumble strips in the road woke me up and since then I've limited myself to trips less than an hour. I don't want to cause an accident that could have been prevented. I think that you will know when it's time. If not, I'm sure your darling Sherry will let you know.