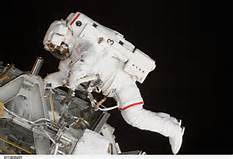 I don't have 8 years to spend in college to become a lawyer or Doctor. Besides I have a tough time with English. You probably aren't supposed to use 'Ain't' in either of those professions. 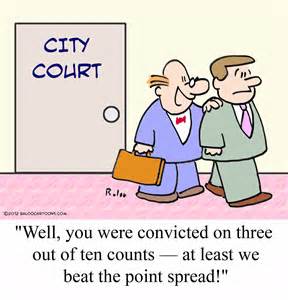 BTW I was raised calling my Aunt Julie, ANT  (Or ain't) Julia. Well I called all my AUNTS,  Ain't! What is with us southerners?  I have had Black friends who pronounced it correctly. I also had an Ain't Janie,  “Now Imma thinking if it ain't Janie, then who is it?” 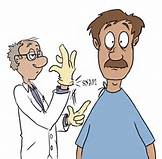 Okay back on track after asking myself what I would like to change if I could, I could not come up with anything that I could logically do that I would enjoy more than what I am doing. I am about as happy as a pig in mud.

I have been very fortunate in my life, being able to do what I enjoyed, and make a livelihood (Is that a good word?).

I was fortunate to find a mate at 17 years of age who went along with my many changes of careers.

Most folk know that I am in the process of installing a bathroom. I am learning a lot. I smiled at what Rick said about installing phone systems in homes built on a slab. I did not realize other occupations other than plumbers had to figure a way to get around not being able to go under a house. 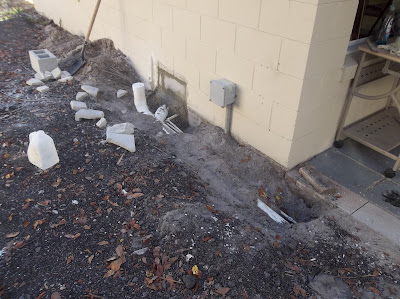 I had to take out three block and 6" of slab. ending up with just enough fall to make the waste go down hill!The water was run in the same ditch. That is the original bed room door. I had to reverse the swing because the vanity would go behind it. 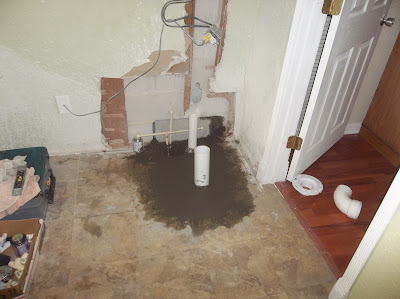 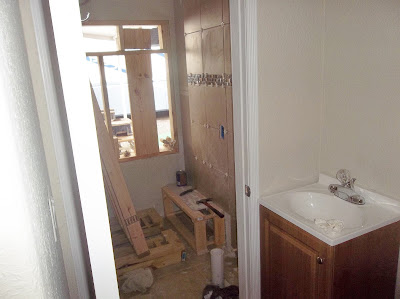 This is now, the door is reversed and the vanity is installed and has hot and cold water and drains!I am using large tile on the wall, with a line of mosaic. I have never put large tile on a wall. 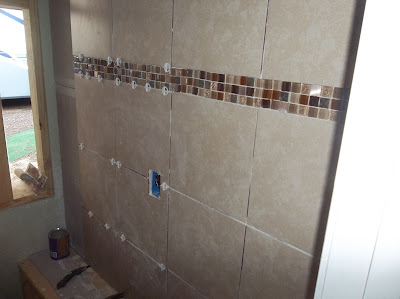 Electrical is roughed in and below the window will be closed in tomorrow and the new wall in the house I hope to texture in the morrow also. 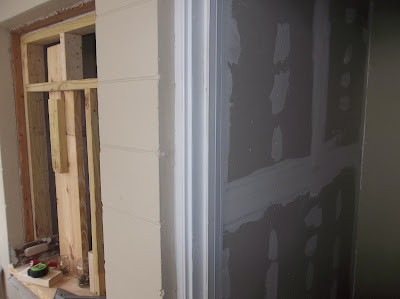 Below is the last look thru the window before it gets boarded up! 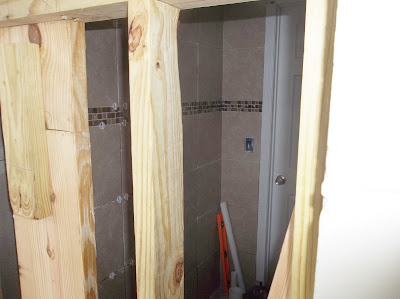 BTW there was not enough room for a walk in tub. It would have been much simpler, I am now in the area of tiling and doing the shower plumbing. I had to raise the shower floor about 5 inches for it to drain.   I think I am on the downhill side of the job. It has to be finished by the 18th of January. We Gypsies are going on vacation for a month or so. LOL 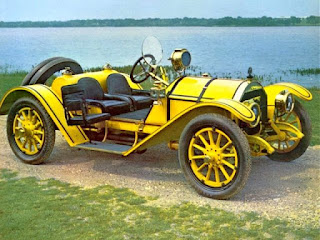 You will need one by then with all that hard work. Grover has been sick again today I tried to get him to go to the ER but he's hoping to feel better if not will go tomorrow. I'm hoping he will to. keep him in your prayers. The bath is looking good you will get it fixed by the time you plan to leave. I always said aunt, but thought it was pronounced ain't, ha. I must have been pronouncing it wrong when I was thinking the black people was. Lol. Didn't any of my aunts complain? Take care. Jean

Wow, that is a lot of work you are doing on the bathroom! Good you have a timeline for when you want it completed! Auntie (rhyme with hauntie) seems to be what DIL calls her aunts (who I always pronounced ants like the insects). Interesting the customs we establish, isn't it?

You are always busy doing something. That bathroom looks like an awful lot of work. But will be perfect I know once it's installed.

There is truly not much I'd change in my life if I could, except maybe my present circumstances, but in the long run there would be very little I would change. That bathroom will be very nice when you finish it up. Sounds like the bulk of the work is done. Nice you have some vacation time to look forward to.

I wouldn't change much either...but wish I had more ambition now. You put us kids to shame. You are one hard worker, like my Bill. This bitter cold -40 below wind chill puts this body in quite the slump.
Your bathroom sure is coming along grand and you'll finish before your trip.
Oh, that's one thing I would have loved doing more of......vacationing. lol
Stay busy and strong our dear friends and love from up north where we are shivering. We do choose to live here tho. We do love the 4 seasons.

Love that tile and the mosaic looks great! Y'all deserve a vacation-you're supposed to be "retired"!!!

I can't believe you have taken on that job. I know you love that kind of work but it is time to slow down..Brother remember we are there. I guess you have heard
the weather for NC..Maybe a light snow tomorrow it's OK with me I am staying
in because of the cold weather. Will talk later....

WOW. That bathroom remodel is looking GOOD! It would feel so good to be that passionate about one's vocation.

Long time ago we said Ain't Stella, Agnes, and Alice. Myrtle we didn't call anything. I think she was uppity so Mama didn't teach us to call her anything. lol Bathroom looks nice.

Ain't nothin wrong with calling your ain't and ain't. I have a few ain'ts and I ain't kiddin.

Wow. That looks like a lot of work for plumming. Your good! I think You should leave the window and live on the edge. Hahaha.