Our family was blessed with talent. I noticed early in life Shirl was good with art and crafts.  I had a knack for 'copying', I could copy a picture but was not good at originality. My Brother Odis was an artist with a stick, pencil or brush.  He also could sculpt wood.

Brother Junior could do about anything with metal or plants.  Ted  and Joe Darnell  could  do anything with metal.  Ted won awards for creating BBQ cookers. some of the creations amazed folk. He has used cars and trucks to create cookers. Joe was into welding art and tree stands for a long time. He is a welder by trade. Ted has retired.

Sister Kat had a way of painting  reminiscent of Vincent van Gogh.

Nephew Bubby,  Odis's son, was an artist in pencil and brick and mortar,  his creations could have won awards.

Ted's son Eric was into 'inking' as an artist, he retired from that and is now creating 'Wood Art'. I wanted something special for this new little house so I sent him this picture: 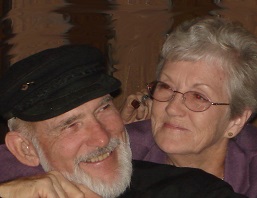 He returned this to us: 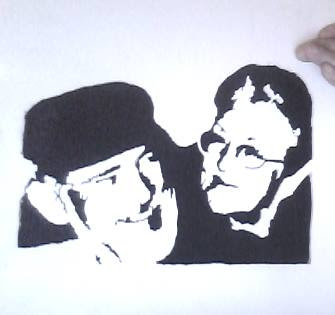 He gave me an example of this work in an e-mail of his uncle Joe and Sandy. 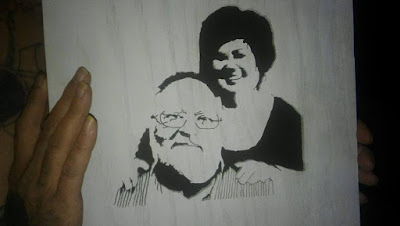 Once I received the photo and saw it up close I realized what he was doing. In our picture anyway, the carving  is the white over laid on the black back ground (evidently by a super jig saw or laser). Very unique.  I like ours and it will fit well in our little house.

It is very intricate work, but as he said, it is not an up close thing, but at a distance, 'It comes to you.'  I am hoping he is successful in his new endeavor. He is easily found on Facebook. 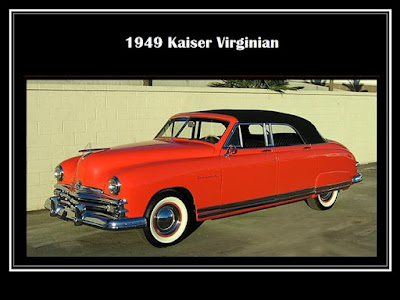 My brothers were the only people I ever knew that owned a Kaiser Frazer. 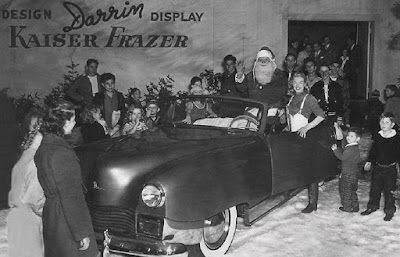 That is a special piece of artwork indeed. I bet you already know where to place it in the new house.

That is nice how the pic turned out. Glad you all are crafty. lol I try but I think I'm best at laundry, HR, and blogging. ha.

Speaking of blogging, the new blog is up and going. I wanted to give you the link. It's also connected with my profile.

I bought a domain but it's still run or connected with blogger so I can actually run the thing. lol Hope you visit sometime. Enjoy your Sunday and hope all going well. You all keeping warm and dry?

Wow! A lot of talent in your family. A nice treasure for your new home.

That's so cool, Jack!
I'm seriously in awe (and a wee bit of envy) of those who listen to their passion ... their muse, if you will.
Stuff like that can't be taught.

So much talent in your family! I love the wood art of you and Sherry! A perfect touch to your new home!

I think we all have a talent. We just have to find it. That is really cool what he did with your picture. Its gonna go great in your new home.

What a wonderful work of art ! It's unique as I've never seen anything like that before. Your family is very gifted in so many ways! Cloudy Sunday morning here but warming up some. Hope you both have a wonderful Sunday!

You do have a very diverse amount talent in your family. As I think about it, there's quite a bit in ours too...amazing to think about it. Dad was particularly talented, he did so much with wood, from banjos and dulcimers to spinning wheels and glider rockers, and of course the river boats and canoes. You're just like him in construction, the chalk drawings are wonderful. YES on ' the arts.' The more I look at the wood art of your portrait, the more I see in it and love it. NICE and new to me, the procedure.
We're finally warming up some in our northwoods. Hugs to ya both