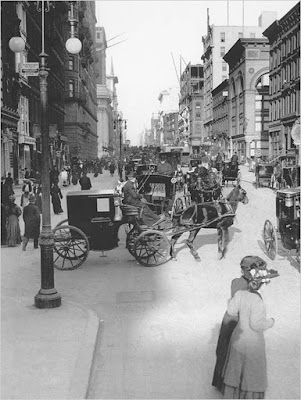 New York City late 1800s
*****        ********
Today was moving day. It was 29 degrees in Central Florida. I get up to silence every morning. Then I load batteries into my hearing devices. Then I hear the coffee pot or Sherry. This morning I half heard. The Left device had bit the dust.
Sherry fixed Breakfast and we ate. We could see Dallas and Marion getting ready to leave also. We were only going less than an hour down the road. We took our time. I started the coach to fill the air tank. This coach is a diesel pusher, meaning the diesel engine is in the rear of the bus. We have air brakes so when the coach is started it builds the air as it idles.
Normal procedure, I start the engine then do some outside stuff. Outside I heard the engine die. (As you know when a diesel dies you know it!) Never has that happened. I restarted it and it ran very rough for a few minutes then went high idle. I shut it off. Later I started it and it ran right.
Son Mark had left Janie the Bull Dog. She was tough today. Did not want to come back inside. She is 80lbs. I wrestled her in. I left the coach 2 or 3 times and she makes it up into the driver’s seat and doesn’t want to get down. Of course being deaf, yelling  is like: WHAT is your problem? (she is part cat, she just looks away and ignores you!)

We drove to Kissimmee, I started the hook up, Sherry comes out. Something is wrong with the slide-out. I looked and sure enough it is wedged at an angle. OUCH! We worked together and as sherry brought it in to get it straight I held one side to get it straight. As she took it out again, I manually pushed out the lagging side.

This was the worst yet.  But upon inspection I could fix it with just a part and a tool I don’t have with me. It was simple to trouble shoot, it was a sheared pin at one end of the slide drive shaft. I needed a ‘Drift or rolled pin’ and a manual driver.

No problem we will run to Harbor Freight and get what we need. Should be less than $20. I did not see them and asked two clerks, same answer, “That is a specialty item we don’t carry it.”
(Thinking) They are such simple items, they must be here.

They were actually 5 feet from the last person I asked. Cost for req parts & tools: $23.00 Total bill $61.  I cannot get around tools without seeing something I can’t live without. Sherry won’t let me go into too many tool & lumber places.  LOL

Bad day ended well. I built a handicap ramp for Janie to get in the coach, and she liked me again. Sherry slips her Vienna sausage, Girls stick together! You always seem to get it all worked out. Its aggrivating though when things dont work right. Janie seems a bit stuborn but I think she has you two wrapped around her paw.

I was reading your story and it went from bad to worse - I am so glad that it ended up on a positive note! Not surprised though!

Yeah I think Sherry and Janie are buddies.

So glad you got everything fixed. That would have been a major problem for most of us that aren't so handy. I've yet to hear about something you couldn't fix. Sound like Janey is a dog of means...she means business and gets it too. Ha ! Enjoy your new home for now. Sorry you have the cold down your way too! We are having our 2nd January thaw this weekend warming up to 50 they say by Monday!

Anyone who enjoys Vienna sausage is a friend of mine! :) I used to LIVE on those (and Waldorf crackers) my first semester of college.

PS - I'll need Tom to translate what you said about 'gadgets' ... but I enjoyed the read nonetheless. Hope your today's lots nicer!

I got a good chuckle out of your title and also out of the sarcasm at the end.
I'm glad you were able to overcome your obstacles. As one of the other commenters noted, the obstacles are bigger problems for those of us who aren't handy.
I know a young man who is learning to be handy, but he also has your problem of seeing tools, gadgets, etc., that he can't live without. ;-)

You go, Jack! You see a problem and tackle it like Bill would...lovein'it.
Another great problem solver, you are. Loved the ' sarcasm ' today...the truth be told!
Have a great weekend. Ours will be ending in a snowstorm and warm weather.
love n' hugs from where we are predicted a foot of snow by Mon. night. will report back after the fact.......:)

The ramp for Janie sounds like a wonderful thing, no picking up and tugging to get her situated! You're a problem solver Jack!

I'm glad you got it all fixed :) Janie the bull dog sounds very stubborn, but lucky she has you two! :)

janie is lucky to have you two.