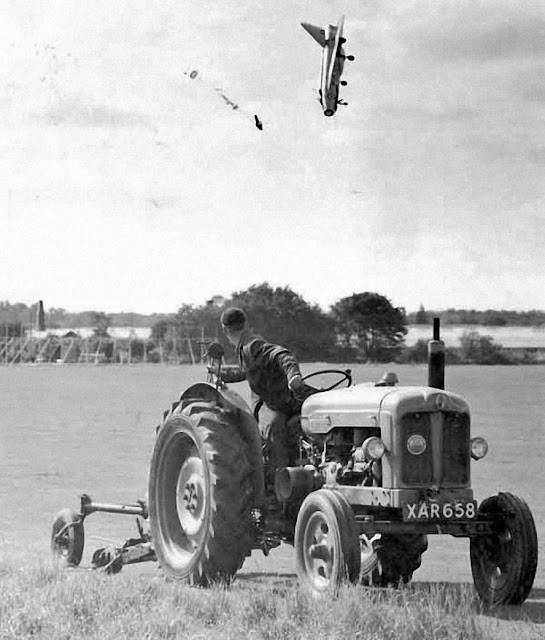 (I don't recognize the tractor, but is built like the Ford Jubilee. Note the landing gear is down on the plane. I bet the chute just opened before he hit the ground. The tractor driver a 15 yr old boy had just told the photographer he should not be there.)


Okay, today:
As an older Seaman I was assigned to the OZ division, known as the ‘Land of OZ’. Most Sailors, nearly 6000 men, on the USS Independence had no idea where we were nor what we did. We were a small division, the Ship’s Intel community.  Every Division has a ‘Mail Petty Officer’.  His job is to go to the Ships Mail Room and retrieve OZ division’s mail when a mail plane lands and the mail is sorted and posted.

In the first few months I learned how important the Mail PO was. A sharp MPO watched the plane landings on the ship’s TV as he worked and when he saw the Mail plane land he ran liked-dy split and was near the first in line to get our mail.

He was so good nature-d he was an easy target for practical jokes. Ski was a Data Systems Repairman. I was reading the Navy Times one day and read about an Admiral high up the chain of command by the name of Malinowski. To me it was such an unusual name I asked Ski if he knew him. “He is my uncle,” was his answer. Nothing else was said.

Just before I left the ship under orders to GITMO, one evening I had my Chet Atkins Airlines tapes playing. Ski was off duty and listening as I worked. I asked, “Ski, do you ever see your uncle?”
“What uncle?”
“The Admiral!”
“I don’t have an uncle that is an Admiral.”
I explained why I asked and what had happened in the last year.
“I was pulling your leg jack.”
“All I can say is you had better not tell anyone else that. I have told everyone he is your uncle.”

It did embarrass him, but never again was he the brunt of another ‘Pollock’ joke. I always hoped he had a great life, like most sailors we never met again.

Side note: for you have asked about Betty, She says things are fine she just needed a break to do other things for awhile. But she is well. Might be back aboard soon.
Betty is one sweet lady!
Nite Shipslog

PS: Friend Buddy sent me some good advice and a little     sarcasm…… 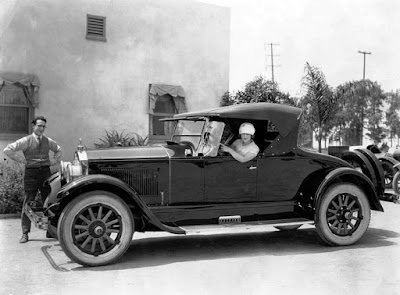 Harold Lloyd and wife
Mildred Davis with their Buick.

What a funny turn of events! Truly, I didn't see that ("I don't have an uncle Admiral:) happening! Have you ever tried looking your friend up on Facebook or PIPL.com?

Many thanks for the update on Betty! Anytime someone goes MIA sans a head's up is cause for concern. Just one of the things I love about Blogville!

a nice story about your buddy. perception changes everything.

Good to hear your news of Betty. I've been having Betty withdrawal symptoms as she always had a comment every day. Hope she is back soon, she is missed! Thanks for letting us know!

Your vivid recollection of long ago events always amazes me, love the "Ski" story, that comeback comment had some unexpected results!
p.s. I've read the "teach a man to fish"...little different twist there...funny!!!

The 'Ski' story was fun, and a message about the jokesters letting off a bit. I'm sure 'Ski' took it all well. I also get a kick out of Buddy's advice and sarcasm. Smilin' here!
love n' hugs from up north where we enjoyed an evening with fellow retirees from the mill. Always so fun catching up.