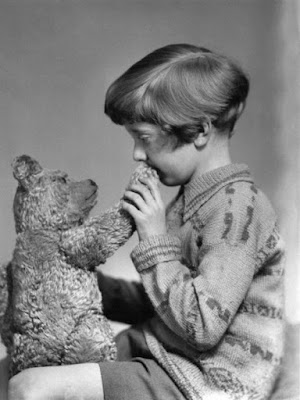 The real life Christopher Robin and Winnie the Pooh (1928) Winnie has been left behind  by many kids for colored animals and animations.

(The above picture was taken 11 years before I was born, and I still feel behind)
At times I feel like I have been left behind. Sherry and I went to McDonald's Sunday morning for our ½ biscuit, jelly and coffee. She orders and I find a seat. Since we are so close to Disney/Universal and other tourist destinations the place was crowded.
As I sat looking around at the crowd I saw people ordering food thru kiosks, smart phones, 2-drive through and at the counter.
In my youth we didn’t even have fast food. I never heard a foreign language except in French class.  Boys dressed practically alike, at least the same style. As I sat I heard at least three different languages and saw a BIG variety of dress. Boy, did I ever feel LEFT BEHIND.

Oh yes, I know and live in the world today, but as I near my 80th year I am starting to feel it. Sherry received a call from son-Mark last evening. They passed pleasantries, weather, how was the trip etc. He is in NC to help his son Luke work on his ‘first house.’

They need a dump truck. So Mark is trying to ‘crank’ a dump truck I gave him years ago and it hasn’t been started for 6 years. I used it in building and then Mark used it in building.  Now he is giving it to Luke.  It is an antique, at the end of the conversation above, he told his mama “I need my daddy!” (I'm the guy that 'fixed things'.)

(I thought) Yes and his daddy needs to be there climbing up in the engine compartment of that old truck, I would feel right at home. There is not one piece of electronics in that engine compartment, I COULD FIX IT, I could have it running in 3 hours.  I know it. I know that truck up close and personal.

Some of us OLD folk are left behind. (quick update: Sherry and I just finished about 20 minutes of scratching our heads to fix something on her phone, a kid coulda done it in two minutes.)

PS: Some of you old folk amaze me using your phones and pads to do this stuff in Bloggersville.  Y'all are pretty danged good! 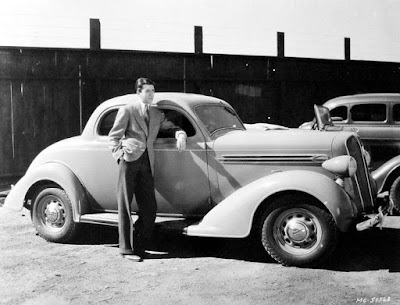 Love that photo of Jimmy Stewart, handsome man that he is :) I don't think I'm too old, but I still feel like I am in the wrong era. I try to keep up with the blogging and I started using Instagram, just for a drawing challenge. Otherwise, I don't mind if the world passes me by, I'm quite content! :)

Now, didn't that feel pretty good hearing Mark say he needed his daddy? (I loved it!)

Tom and I don't even try and keep pace with what's trending today. My BF in St. Pete thinks it's hysterical that we've never used our DVR. Grammy's? Forget-about-it! Most of today's (so-called) artists I've never heard of, and I'm not losing sleep over it. LOL.

I love old Jimmy Stewart I think he was a good guy.

Oh my goodness Jack - I know what you are saying - I can do so many, many things - but electronics I am way out of the the loop!!!

Oh Jack you probably do better then you think you do. I know some our age who can't turn a computer on. I remember in AOL Journals I didn't have a picture on my computer or know how to put one anywhere. Trial and error solves so much.

bet you do better than most in the technology department. i'd be lost without my husband.

I do know what you mean! I have been left behind too. Things keep changing at such a face pace it is hard to keep up. In this day and age it's wonderful to hear you are needed. It used to be older people were revered for their wisdom, not so much anymore. It seems the rare occasions I get asked for advice anymore is something to do with cooking. Things have changed with that too, but not so much that I still don't know a thing or two.

As far as advanced technology, I need help. I just had our son show me how to transfer my home movies (VCR) to DVD-R. Some of them are as old as the hills and are becoming brittle. About the time I finish, something better will come along to transfer them to again...oh dear. It sure has been fun recalling our past tho. WOW, how everyone has changed.....as for my phone, I know how to answer it.
love n' hugs from our chilly north. Off to the farm we go to see Mama

I try to keep up with technology but my pocket book is old. I blog from my iPad and even my phone at times. I just learned today that I can make a whole post by talking and it types it for me.
My daughter will be going to Disney for her first time at the end of February, they are staying at the campground there. The first thing she wants to do is find the "cupcake ATM'. yep, just put your money....no excuse me... Just put your card in the slot, pick a flavor and 5 dollars later, it drops a cupcake ready to eat.
Lisa