Historical Photo:
Hitler and /Speer were mesmerized at the largest piece of war machinery ever built, the Schwerer Gustav Artillery 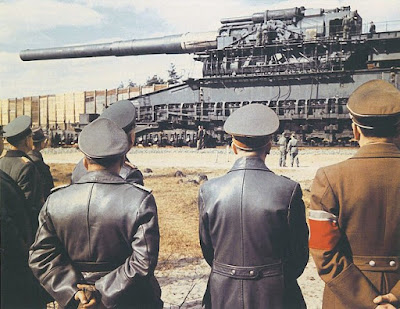 Okay, Make me look good!
In scrolling thru the internet and my e-mails I see a lot about ‘make-overs’.  Where homely looking Joe or Sue are shown to the public. They are plain and most need their hair done and are wearing clothes like mine.(SOME OF THEM I COULD HAVE MADE LOOK BETTER)

The show guy/gal sends the subject into the back. Later, when they reappear they look like they ‘just stepped of a band box’, as my BIL used to say.

Their family is shocked, they never knew that hidden beauty was there. Most of that stuff I don’t believe, but it makes a great demonstration  and TV.

I had never watched a ‘Reality Show’ and don’t actually know too much about them. A couple years ago sitting in the doctor’s office while my girl had her cataract surgery I watched a show I could understand, This Old House. They weren't doing anything cheap, I know the rules in that game.

They did a super job and at the end  gave the cost of the ‘face-lift’. I could have built a house from the ground up for that cost (IN my area).

In our town we did two complete remodels including bricking. I told both owners the remodel would be too costly for the structure. But both owners planned to live there the rest of their lives, that is what they wanted.

We had a ball at both houses, enjoyed the work and the money. The owners were friends at the end and still are.

I once heard a line from a new sub-contractor that stuck with me. Once interviewing a new mason, after hearing my name he asked, “Do you know Bubba Darnell, he is the best mason around?”

“He is my nephew and he recommended you.”
He said, “Well if I get the job, I’ll make you look good!” I had never heard that in the industry before. He qualified that with, “if you order enough of that brick for the whole house from the same batch.”  I had learned that part a long time ago. 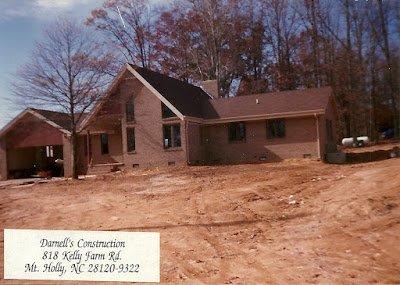 He got the job, and he did make me look good. Great brickwork, LOL
Nite Shipslog 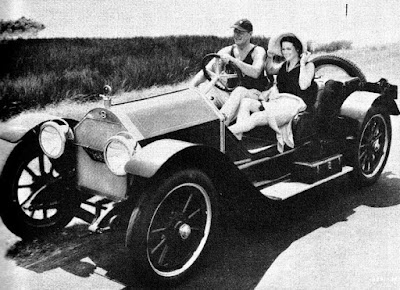 John Wayne and Maureen Ohara in his 1915 Stutz Bearcat.

I can tell that is going to be a pretty house. Now if you find one of those places that can transfer me into a young chick, let me know.

I can see how beautiful it was too!

I made a comment but it would not post or I can't find it. Maybe I commented on the wrong one...My computer is doing it own thing and my mind is not helping.

I miss seeing all-brick (REAL brick) homes everywhere. How ignorant, back in '78 when we had our home built in West Texas ... the extra brick laying this way and that was thought of a nuisance. I really like this image of the Mt. Holly home; now, I'm trying to imagine what it looks like standing inside, looking out. :)

Only recently I was remembering a prime-time reality show where ordinary people would undergo plastic surgery, extreme diets and gosh know what else. The big reveal was a show-stopper, yes. Wouldn't it be a kick to revisit those folks to see what they look like now?

I could never get into reality shows. I find them too fake. I like to watch HGTV but have never seen them really get their hands dirty. Same with the shows where they fix up cars. Its not reality when Its all laid out for them.
That is a nice brick job you show here. We live in a brick house. I rememer when we were looking for a house to live in, it was hard to find a good bricked house. Now days they are all sticks and vinyl.
Nite
Lisa

I could use a makeover but at this point in my life, it would take a lot of doing. I do love to see the homes made over and you did a great make over with the home you got there in Florida for sure. Lots of improvements there for sure like that gate you recently put in.

yes, the fella did make ya look good...beautiful home. There aren't so many all brick homes up north by us...they're cold and it gets bitter up here.
Once they do warm up tho, I'd imagine they maintain their heat a long time, like the logs at the cabin.
love n' hugs from up north...still chilly frigid nights but by noon it's a bit better. I can't wait for spring. Gettin' too old for cold bones.

i'd like a nice brick home. you two did a great remodel in Deltona too.