Alaskan daylight, Juneau and the pipeline 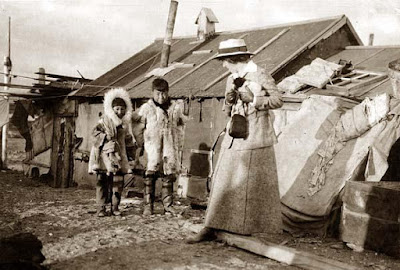 (above is the snap shot of one of the first governors of Alaska, camping)
One of the interesting facts of the state of Alaska is if you live in Anchorage, Tok, Palmer, Wasilla, Fairbanks, etc. you cannot reach the capitol of Juneau by car. You must float or fly in to the capitol.  That was amazing to me. Here is a map showing where Juneau is in relation to the rest of Alaska. To me that is odd.

This is our trip from the Yukon and around Alaska. Alaska is a huge state,but most of the paved roads are in highlight. The red arrow indicates Juneau, the capitol. Chicken is a blue dot and Homer where we went fishing is the lowest dot on the Peninsula.


Okay with that little fact out of the way, we did not go to Juneau!

Something else surprised me, I had heard about 24 hours of day light, but I was surprised to actually experience it. We were boon docking once, sitting around the campfire.  Sherry the map lady says, “Honey, the map shows a lake near here, want to go find it?”  Sure lets walk.  So we started out. Not realizing it was 11PM we found the lake, beautiful site. It was a little after midnight. This pic was taken about 11PM.  We had to drape towels over the windows to go to sleep. I did say, “If we lived here I would probably work myself to death!”  LOL 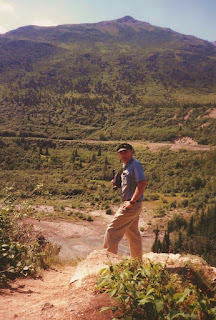 For the visitor, this is confusing. I am sure for the residents it is just normal-life. If you read comments you know that The Big “O” family (Dar, Mel & Cher) and John (of Paula’s Tales) have family that lived or lives in Alaska. Cher and her hubby lived there before moving to the 'Yooper'  of Michigan.  Anyway 24 hours of light in summer and 24 hours of dark in winter would not set with my girl that is for sure. 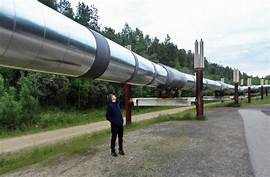 This is the pipeline as we saw it. (from the net can't find mine)

(Above is the way Sherry doesn't want to see it! LOL)

Of course the Pipeline was of interest to us all.  We boon docked close to an area through which it runs. It is 4 feet thru and 800 miles long.  The part we saw had the pipe running between two uprights (like a goal post). The design is very technical. That pipe line is a non-attached pipe. There is no attachment to the stations. It can move from side to side with temperature changes.

I once assisted on a million $ house remodel for a man who designed the heating for the line.  He gets like .00001 (?)cent per barrel transferred, which amounts to a pretty penny over a year.

The fishing and seafood industry is the state's largest private industry employer.

Most of America's salmon, crab, halibut, and herring come from Alaska. We eat ‘salmon patties' made from Canned  Wild Alaskan Pink Salmon'  every couple weeks. Both our mamas recommended that fish. 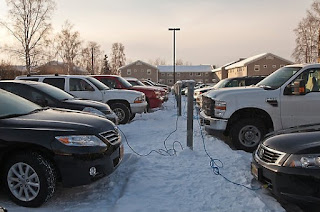 The winter tough part. To keep vehicles from freezing many parking lots business and grocery stores have outlets for that purpose 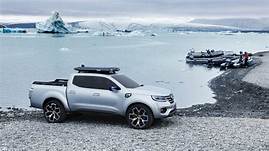 But then nothing much beats this beautiful country.
Posted by jack69 at 1:54 PM

I often wondered about how it would be with days of daylight. I do not think I would ever sleep and might even get everything done before dark.
Lisa

I don't think I would like to live in Alaska but I think John could because he can sleep anytime and anywhere. I understand it wasn't possible to drive to John's brother in laws fishing business either. I know the name of it but don't know how to spell it. lol

Got my copy of "Sticky" out earlier to refresh memory and after reading this went through to see if you'd included any photos. Thinking Alaska would not be my cup of tea! Nice map with the highlights Jack!!!

Oh my goodness what wonderful memories. I didn't like the daylight at night - I am one that needs the room really dark - I mean I liked it on the trip, but don't think I would like to live there.

Did you know there are only 12 roads in Alaska - real ones - but they are long.

i think i would like 24 hours of daylight. but i can understand why some people wouldn't.

I think I could deal with the 24 hours of sunlight. But the 24 hours of darkness would probably do me in. I am very effected by the lack of sun and the short days of winter. All I want to do is hibernate. I didn't realized the pipelines ran above ground like that but I imagine with the frozen ground, that would probably be the only way to do it. What an adventure in learning you had. So many new things and ways of doing things they have compared to where we live.

I'm lovin' this. Yes, my nephew lived in Soldotna in lower AL and Cher lived in North Pole, so appropriate for her. She's make a perfect Mrs. Claus. She said the city was all about Christmas year round. Not so sure I could handle the long, dark winters but wouldn't mind summer. All that daylight and no wonder AL grows some of the largest produce in all of the USA. The family said the pipeline was amazing to see and imagine the production of building it. I can't wait for more stories.
love n' hugs from up in north central WI where the snow is melting slowly but surely.