"The Old Inn" One of the 'Hotels' in Alaska during the RUSH!


Leaving Chicken BIL Dick pulled up beside me (As I said this road is 100 + feet wide in spots and I was going about 25 MPH. We talked as we rode. He wanted to speed up to 50-60 I wanted to go slower and see the country. The ride was rough either way. I told him we would meet him in Tok. We had already decided the RV Park where we were planning to stay. Our plans were to stay a few days and scout around.  He stepped on it, and we waved good bye.

Heavy steel and Iron from gold days equipment (Note the piles of rock)  The rock piles, there are actually lines of rock all over the country where the gold was mined. I will explain later. 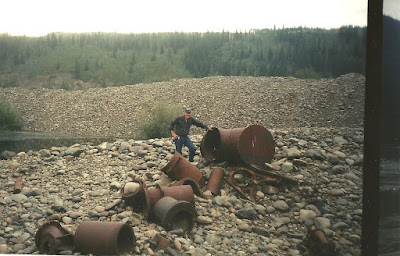 On this part of the journey you can still observe the remnants of the Gold Rush. There is even a giant dredge apparently intact. It sits where the gold ran out. The Alaskan terrain is absolutely beautiful with snow capped mountain always in the distance making a beautiful backdrop. The dirt road continued for about 60 miles (total of 100+ mi of dirt road!) then we rejoined the paved ALCAN on to Tok.

Back on the paved road That is our coach 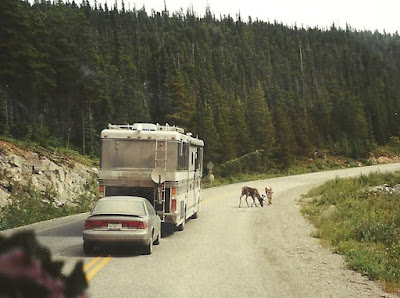 Tok is a small town, but much larger than Chicken LOL.  We ate at the RV Park café’  for breakfast one morning, I had to try Reindeer Sausage with my eggs and potatoes. It was good when I ate it.  But it got worse(r) Each time it came back.  LOL 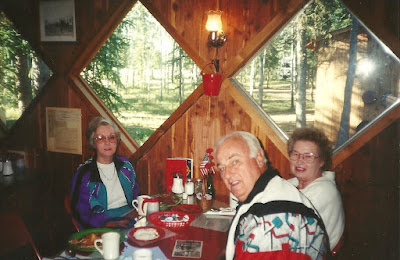 Inside the restaurant in Tok Note the terrain out the windows, great! Talking to a local about the Caribou migration. He said, “The Animal is so dumb it only knows South and North. And as they go either direction if they come to a fence they will not go around it, but stop and graze and wait while hundreds gather, for farmer or local to open a fence for them.” (His opinion not mine) Talking temps, he said it reached 60 below once and you could throw a bucket of water out and  most was ice before it hit the ground!

Our trip to Alaska was before cell phones. We used an At&T calling card. Traveling through Canada ate up the minutes on the card because calls were more expensive, twice the USA rates. 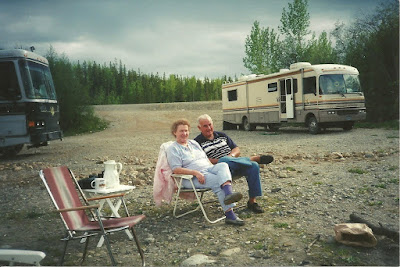 Alaskans are extremely friendly and helpful. There are areas you can also tell the Russian influence from the 1800’s. In the short growing season they grow some super good veggies.

Driving toward Valdez you see a super  cascading water fall …. 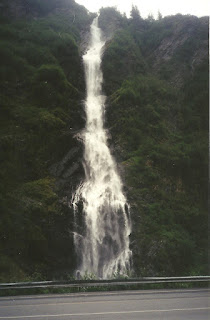 and  also the edge of a Glacier (Actually not pretty up close). very dirty ice. 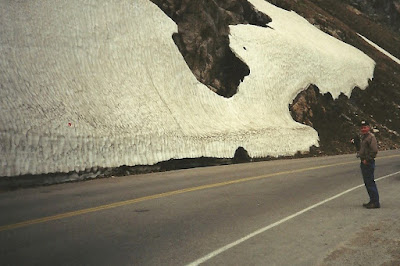 We stayed in RV parks when we needed water and to dump the holding tanks. They were much more reasonable than the lower 48.

We were never disappointed from North Carolina to Anchorage. Having great companions to travel with, to use my grands word, Awesome!

PS:  Alaska has more licensed pilots than the other states.


Outsiders first discovered Alaska in 1741 when Danish explorer Vitus Jonassen Bering sighted it on a voyage from Siberia. (The Bering Straits)

Russian whalers and fur traders on Kodiak Island established the first settlement in Alaska in 1784.

*****In 1943 Japan invaded the Aleutian Islands, which started the One Thousand Mile War, the first battle fought on American soil since the Civil War.   (Didn’t know that did you?)

I only towed a Saturn for us all to use and Dick left his in N. Carolina.  Here it is parked at Santa's house. 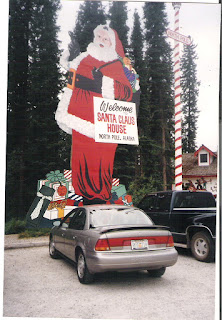 Here we are by a river boon docking and decided to wash the car using buckets. Cars and motor homes get very dirty when it rains and sludge is throw up on them. 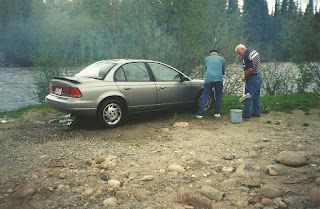 I bet that "local" had some good fish stories too!
Fun read. Yea, I noticed the different Font.
fancy.

Now that I see some of your photos it brings back my memories of Alaska - it was a state that had so many different things in it then we have here. Still while it was a nice place to visit - I would not want to live there. Just too different and too far from here.

John's brother-in-law died there a few years ago on the fishing boat he had sold and promised to stay with the buyers a year to show them the ropes. This is an interesting post because when John's relatives come to visit they don't talk about Alaska that much because they have lived there so long it isn't interesting to them. John really liked that pipeline when he went to visit.

Now I'm feeling all sorry for those Caribou! (lol) I adore sausage, but not sure Id have the moxie to go for the reindeer variety. Sherry looks so pretty in that café pix!

Even when traveling friends want to speed the process, it's still nice having them as companions on such a wild adventure....YEP, still want to go even with 100 miles of dirt road. The guys have gone caribou hunting in Canada years ago and they always commented how fast the pulp truckers would fly past them throwing rocks all over. That part I don't think I'd appreciate., but the rest? heck ya!, bring on the adventures.
love n' hugs from up north where our tiny adventure begins today while the weather is nice

It does look totally awesome there for sure. Glad you found some good RV parks to enjoy. I'm not so sure I'd like reindeer sausage at all, but for a lot of people back in the day, I suppose that would be their main dish at times. I know that we still have people hunting deer and love the meat they get. I'm thoroughly enjoying your tales of Alaska!

enjoyed your tales of alaska. reindeer sausage and all.