That picture was taken in 1903. The man is Alonzo (Lon) Darnell. His daddy had been a Confederate POW. That young lady is Mae Etta Hilley Darnell. She was born in 1888. She was 15 years old. The baby is my daddy Frank Benjamin Darnell, the Frank is from Frank James a hero of Lon's. There would be 12 more children to that tough lady, 11 would live. (The next boy was named Jesse)

Now for tonight:
Cokes, a pack of crackers or a bag of salted peanuts were a nickel each. It was in the late 1940’s. When I was little, most folks I knew had first names of ‘Brother or Sister.’ The church clerk was Brother Turner, he was my new friend Sonny’s daddy. I was playing ‘cars’ with Sonny at his house when I heard ‘that new preacher’ mentioned so I listened, what I heard:

You wouldn’t believe it. (Brother Turner was saying) He is nothing like any preacher we ever had. Our first business meeting he said he thought God’s money should be spent wisely. Said y’all are paying $75 a month to rent a house for me and my family. It is the nicest home we ever had, but I walked thru the house next door to the church, that you own, and wonder why I am not living there?
I told him there was no water the city said the war had taken most of the supplies needed and now that the war was over, the city said it would be two years before getting us water. And besides we planned to tear it down. It is an old mill house and needs a lot of work.
You know what he said? He said, when he left the farm he lived in a mill house and worked in the mill. He said, “If I can get water, is it okay if we fix up the house and save God’s money for missions or some other good projects?”
Well buddy he was as good as his word, we got water! Now he is fixing up that house. We cannot believe him,  in ‘overhauls’ and working harder than anybody. That preacher laughs, sweats and has a good time. The man can preach too! That is the gist of what I heard.

Well, my dad always amazed me at his ability to ‘work’. We moved out of that nice home into the 2 bedroom house. I was in the same room with Shirl again. I didn’t mind. I was now in the first grade, she must have been in the third.
Daddy was eventually 'live' on the radio in Burlington. 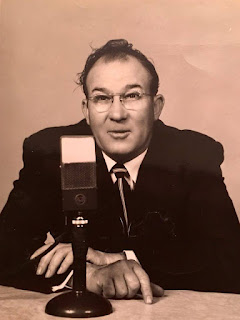 We then lived only two blocks from Sonny and Hurley, my new friends. It was a 3 block walk to school and I could see squirrels walking the power lines between telephone poles, they amazed me with their agility.  Life was good.
My daddy started off as a Georgia share cropper. Nobody ever said, “That man is a slacker.”

PS:  The Last of the Little known facts about the USA, from Cousin Tony: South Florida is the only place in the world where alligators and crocodiles coexist in the wild.
***    ***    ***    ***
Next blogs we will have some facts about Alabama
But now, today’s automobile!
1930 Rustonmodel 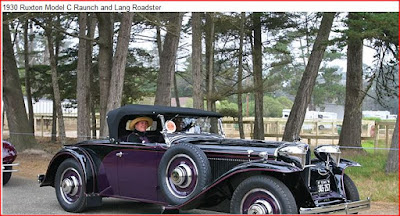 Your grandpa is very handsome man. May Etta has a pretty face - she looks more than 15 years old to me! Yes your daddy was no slacker!
Always love to hear the stories about both your parents.

I agree a lot with Glenda. I enlarged the photo and your grandpa was handsome. Your grandmother looked so tiny and scared. So young. Your daddy seemed like a saint. No wonder you know what you are doing in life! I don't mean financially either. Good stable grounded man.

Absolutely, your grandparents were exceptionally good looking. (Me, I'm thinking Mae Etta looks like she's trying to suppress a fit of the giggles.)
They sure don't make preachers like they used to. Don't it make you proud?

your folks seemed well grounded. that's why your father got so much accomplished.

Such a heartwarming family. You deserve every bit of pride in them. It's wonderful how your Daddy the Preacher was such a hard working, compassionate man. I loved the story of how he helped dig the well and then to fix the house. I see where you got your innate abilities from. I'm sure your daddy is beaming with pride from above.
love n' hugs from up north............yep, we're in for another snowstorm where we choose to live.