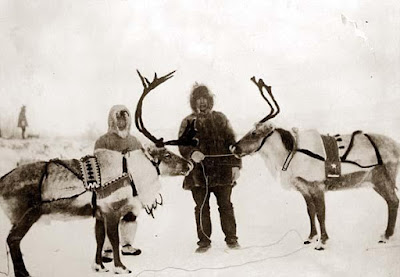 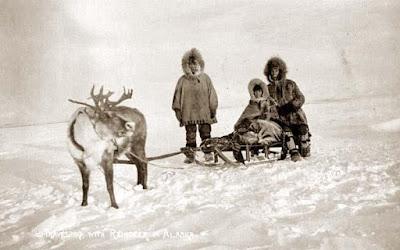 Fishing is good, it is also expensive for the license. We filled our small freezers with delicious Halibut and a little salmon. ***WARNING****    TO anyone who attracts mosquitoes. Make sure you cover with repellent. Sister Kat was a magnet for mosquitoes.  She is the only one of the four of us who was bothered.  Some folk declare that the mosquito is the Alaskan state bird! LOL 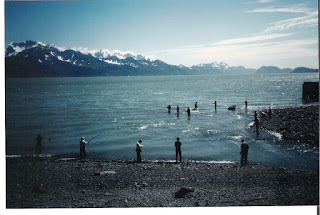 WE watched many fishermen fishing for King Salmon from the shore.

When we drove our coaches on to the Kenai Peninsula, Dick found a church where some men were working and asked about fishing. He hired a guide for Salmon and got a free boat for Halibut. While we were waiting he also found us a volunteer job.  We sheeted and roofed an addition the church was adding and had no one with the expertise to apply roofing to state standards. Dick (with my agreement) volunteered us. We had a great time with the locals. It was a great deal. 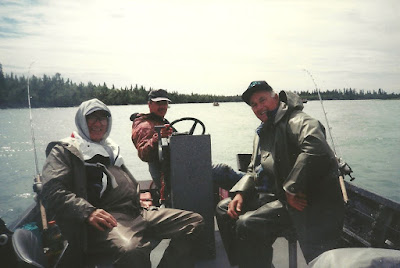 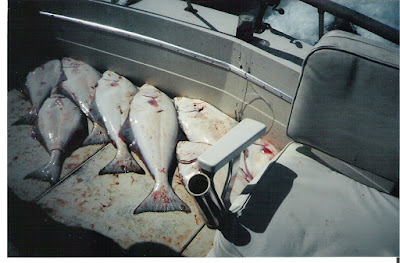 After fishing for  Salmon in the Kenai and Halibut out of Homer, we filling our freezers .  We then stopped by Anchorage.  We did some sightseeing and bought some souvenirs.  Then we headed excitedly to see Mt. McKinley or Denali as it is called locally. It is the highest mountain in North America, Over 20 thousand feet high. We took a tour there, saw a lot of wild life but never did see the peak. I understand it is very unusual to see the peak due to clouds surrounding it.  Denali National Park is of course beautiful. 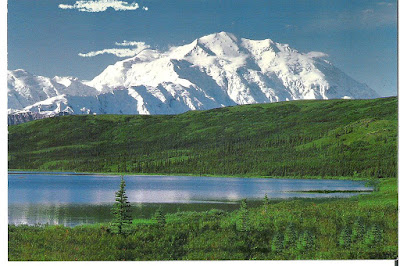 The above is Denali from a post card.  Below was my attempt. 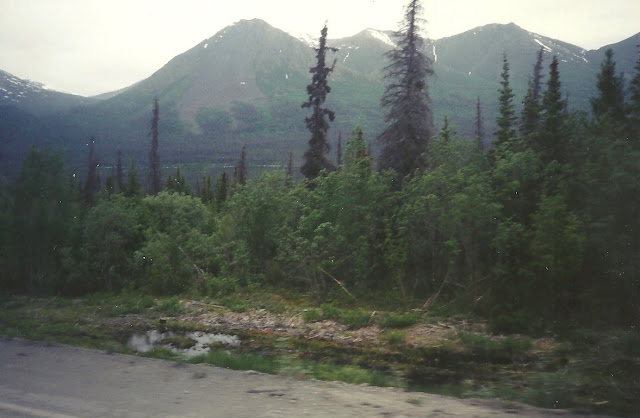 What is the biggest Cabbage you ever saw?  Parts of Alaska grow some fantastic veggies in the short growing season. Can you imagine a Cabbage head that weighs over a hundred pounds? The Alaskan record for a Cabbage as of 2012 was 127 pounds. That is BIG! Imma thinking you could see it growing! 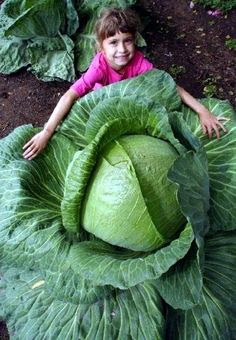 Then on up the road to see Fairbanks.  We took a tour on a river boat. Saw sled dogs in training. Got to hear a speech from a lady who had won the Iditarod, dog sled race. That race is 1000 miles long and is completed in 8-16days sometimes longer as the wind chill factor is at times 100 degrees below zero. Tough dogs and people in that race. 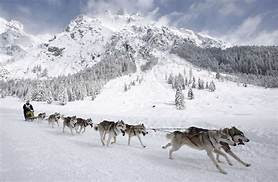 Tomorrow I will finish Alaska. I am learning it takes time to cover just the basic basics of any state. So far we have only visited Alaska once. I would really like to make it two.


PS:  The wild forget-me-not is the official state flower. The Territorial Legislature adopted it in 1917.


The willow ptarmigan is the official state bird. The Territorial Legislature adopted it in 1955.


The Sitka spruce is the official state tree. The Territorial Legislature adopted it in 1962.


Dog mushing is the official state sport. The Alaska Legislature adopted it in 1972.
Posted by jack69 at 12:27 PM

I hope that you get to go back - that cabbage was huge! I don't think I have ever seen anything like that.


Did you know they go back and forth between wanting to call it Mount
Denali or Mount McKinley?

So did you flash freeze your fish and send it home?

WOW!!!! Could say that about each paragraph....however that CABBAGE gets the big wow!!!!

My boss recently went to Alaska and brought me back a few Salmon and Halibut. I love the Halibut the best but the Salmon does better on the grill. That cabbage is hugh! Would make a lot of slaw!
Lisa

John's sisters always buy a lot of fruit when they come to visit and were amazed at the price we pay for a meal at the hospital cafeteria. Everything must be expensive there.

the cabbage was huge indeed. when my daughter lived in alaska she volunteered to help with the sled dogs to prepare to race.

That would be something to see and worth seeing again for sure ! Looks like your version of the mountain had less snow on it than the postcard did. Such a different way of life, but not to say it isn't good. No matter where you go you always manage to help someone out. Good for you !

The cabbage would fill my kraut crock at least 15 times., WOWZA!!!! My brother
Eric ran sled dogs in our local races for a few years and it was fun driving him to them and helping, watching, cheering him on. We always loved those energetic, fast dogs that Loved to pull. We loved the fresh fish out of Alaska's icy waters. Nothing finer. Sorry to leave AL so soon. Loved your entries about such a gorgeous state with so many untouched areas.
love n' hugs from up north where the wind blows cold, cold air through the sunshine air.