We went to Alabama and did not have a Banjo!

Coldwater Covered Bridge
More than 160 years old, the 63' bridge in Oxford was built
by a former slave and is the oldest covered bridge in
Alabama.

AT 8 years of age, Alabama was my 5th state to visit following NC,SC,TN,GA. Now for a new entry:
We have camped in Alabama at least 4 times, for a week or two at a time. The Alabama folk I have met are ‘salt of the earth’ folk. My wife mentioned Opp, Alabama early in our marriage she knew someone who relocated there. Then after meeting Jean, here in bloggersville, we just had to meet her and also see Opp.  We had dinner with Jean and Grover. She is just as sweet as I knew she would be. I regret we did not spend more time with them. That girl is a working machine and she is older than Sherry and I.

A real woman who tackles tasks like replacing a ‘hard drive’ on her computer to cutting down trees to save her cat. She devoted her life to Grover who passed recently.  I know she misses Grover.  We miss her here at bloggersville.

Anyway she is the kind of person that makes Alabama real. Of course here on the Blog many of you know Rick and Jilda (Life 101). Rick has an easy take on life with great photography. Now friend Myra is headed for the Gulf state. 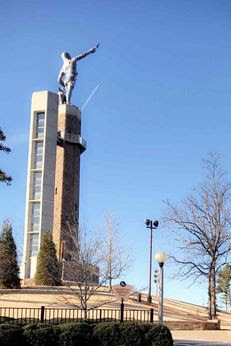 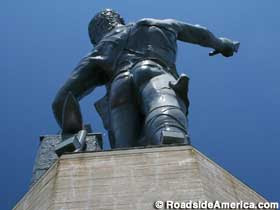 Me? I remember ‘Iron Man Mike’. That is what daddy called him. I understand he is the Vulcan. He stands 52 feet high outside Birmingham proper. Daddy drove me there to see him, probably 1947 That is there to honor working men and women son! I was allowed to wander around Birmingham alone. I was probably 8 years old. It was the largest town I had ever seen. 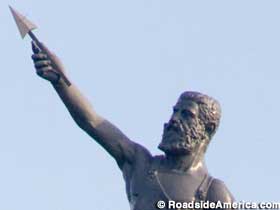 In 1946 his spear hand was fitted with a neon "safety torch" that turned from green to red whenever there was a traffic fatality in metro Birmingham. In 1964 lights in the shape of a Christmas tree were strung up the side of Vulcan's tower; they glowed red whenever someone in Birmingham contracted TB.
I have to be honest, looking back on my childhood visit, I thought the Vulcan was a statue of an Iron worker.  After all, daddy referred to him as Iron Man Mike, the largest cast iron statue in the world, from the time just  after daddy was born in 1903.

Of course I like Alabama and one of my first solid friends in the USN was Jim Amberson (Gadsden), was from there. We lived in the same trailer park in Norfolk.  He was on a Refer ship and I was on the Independence.
Nite Shipslog


PS:  More on the state of Alabama!
Tannehill Ironworks, which was built during the years 1859-1862, was a major supplier of iron for Confederate ordnance. Tannehill Ironworks was added to the National Register of Historic Places on July 24, 1972 as Tannehill Furnace.
pic 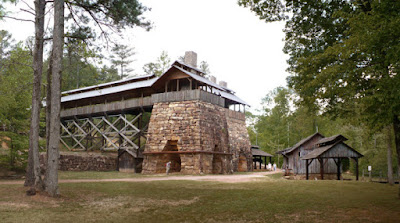 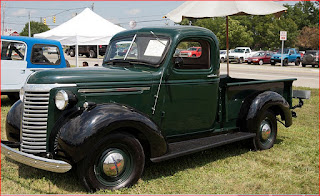 A whole bunch of Alabamians own Pick up trucks, some of them like

You have a lot of blog friends - who you have visited. So Myra is retiring. Good for her.
Hope you had a peaceful weekend.

Thanks for the shout-out, Jack. I'm growing more and more excited every day. AND, I can't wait to meet y'all up close and personal some day soon! :)

I've thought of Jean often. Good to see a word about her. Hope she is okay.

I think Alabama would be a great place to visit. I cant get my man to go any further than SC!
Yep he hes one of those that does the same things and goes the same places. For some reason has no desire to change routine. There are a lot of places Id like to see.

Alabama is a great state full of some of my favorite bloggers. Nice to see the places you've been and hear about the good folks from there.

All told, it's a pretty peaceful and friendly country we live in. I'm like Lisa, have a hubby that is set in his ways and does not care to explore beyond his routine comfort zone. Too bad because there is a whole wonderful bunch of states I'd love to explore. Someday I hope that'll happen again. We used to travel more and I'm missing the excitement of it. I'm loving that sweet 1940 Chevy pick-up...oh my!
love n' hugs from up north. It's very windy today, but not so cold. Snow's a comin'

That old covered bridge is wonderful as is the "builders" story! I recalled reading "The Bridges of Madison County", like all y'all, I love Alabama, I worked in Cullen one winter when the worst snow storm of record hit and one thing for sure, those folks don't drive so well as Missourians on snow and ice!!! Very interesting historical read Jack!

i've wondered how jean is. i miss her here in blogger country. sad about grover.

Thanks for the sweet post about my home state and my much loved Mom and Dad. She (Jean) is doing well all things considered. My oldest is staying there with her for now. I’m going to head down that way soon for a couple of weeks before I head over to Florida. Take care, Sheila