All the Gold in California


Note I miscued this this last night.
Sorry, but here it is live and in color.

Historical Photo:
Yes Lisa, even before the automobile, folks loved the beach. Long Beach in LA 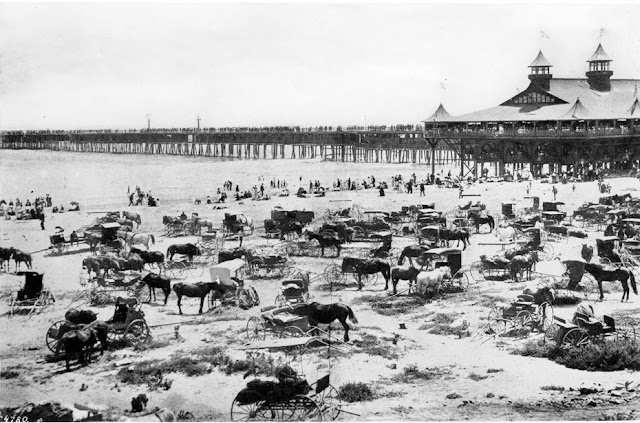 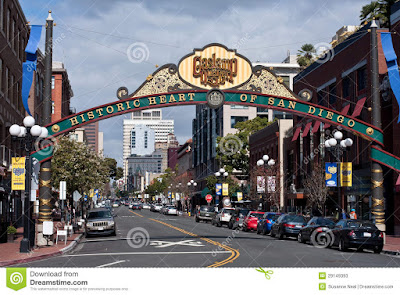 Is in the bank in the middle of Beverly Hills
In somebody else's name.
So if you're dreamin' about California,
It don't matter at all where you've played before.
California's a brand-new game.

I have a friend that lives there and calls it ‘Crazyfonia.’ But no matter one’s thoughts of the other coast, it is an absolutely beautiful state.

Our first time in California just relaxing was 1983. Sherry usually does the map reading, we entered the state on I-15. We drove southwest to San Diego. The weather was great and everything was green. I will not cover it but we did something fairly ignorant, we crossed the border drove thru Tijuana and south looking for a good restaurant we had heard about.  Then back to the States.

We hooked up the little pop-up camper we were towing and headed to LA. We found a nice park, not realizing we were next door to Disney Land. Then started the tourist thing. 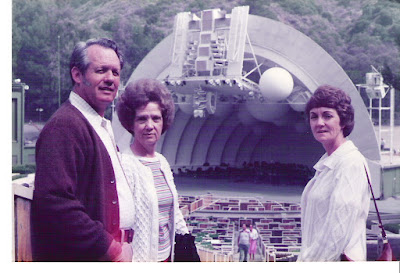 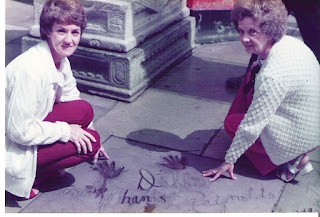 (The girls with Debbie Reynolds star at Grumman's)

We drove by the Crystal Cathedral.  (On a later trip we visited a church service) there.
We drove out to see the Queen Mary which then was a Hotel. Not sure if it still is. 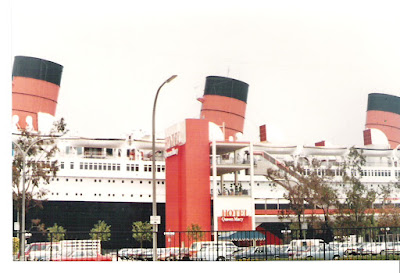 California is a huge state and steeped in history I would not want to live there. Sherry would be wondering when the next Quake might happen!

1.    California's Mount Whitney measures as the highest peak in the lower 48 states. Its most famous climb is Mount Whitney Trail to the 14,495 feet summit. Wilderness permits are required.
2.    Alpine County is the eighth smallest of California's 58 counties. It has no high school, ATMs, dentists, banks, or traffic lights.
3.    In the late 1850s, Kennedy Mine, located in Jackson, served as one of the richest gold mines in the world and the deepest mine in North America.
4.    In city of Pacific Grove, there is a law on the books declaring the molestation of monarch butterflies to be illegal.
Posted by jack69 at 11:28 PM

I had no idea that there were horses on the beach - AWESOME!!

Now I have been to California quite a few times - I have family out there.

I also remember the Gatling Brothers. So many memories.

I wonder what has happened to the Crystal Cathedral these days - I used to watch Schuller.

my mother grew up in california and my brother and lots of my relatives live there today. a beautiful place, indeed. like that beach picture.

Agree that California is a very beautiful state, beach to mountains and desert areas. I spent a year in Oceanside, Camp Pendleton in 1969 and have been back several times. My last stint was in '01 way up north in Humboldt county ~ pot capital of the world ~ perfect cliamte for growing, both weatherwise and mindset of much of the population. It's only gotten "Crazier"!!!

Lots of neat places to visit in CA. Like you, I will visit and then leave. Safe travels!

Looks crazy seeing the horse and buggies on the beach. I bet they camped that way too.
I can't say ill never go to Califorina. I like anywhere warm but there is no place like home.

from the desk
Lisa