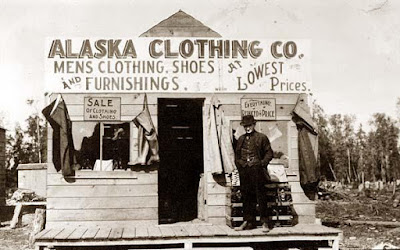 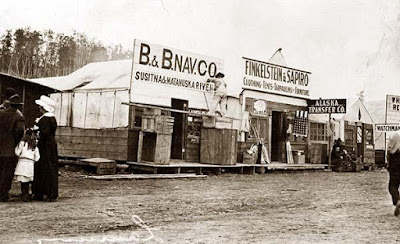 Blog entry:We are going out to eat with Don and Evelyn so I am posting even earlier than usual.. I hope you enjoy Alaska with me.

I thought all that gold in Alaska & Yukon was panned from creeks by miners, but not so. Much came from miners digging dirt all winter along those creeks into piles and spending the warmer weather panning that dirt they had dug.

I did pan for gold in Bonanza Creek and actually got some VERY SMALL grains of gold. Again in Chicken and got a piece of 'color' the size of a grain of sand.

At Chicken I met a man who searches for gold all summer, then heads for the lower 48 for the winter and sells the gold to cover his expenses. Sherry and I walked alongside a couple creeks. They were posted with owner’s name, claim number on an Official metal tag. Something like 50 or a hundred feet each. We never saw anyone working a claim.

The miner I met had a small generator and a pump mounted on a small trailer that he towed with a 4 wheeler. That was “his mule, pan and pick”. He had what is called a shaker and pumped water from the creek into it. The last part of the shaker was a sheep skin that trapped the minute particles of gold.  He said that is where the term ‘Golden Fleece’ originated (the same on the dredge). Anyway he did show me 4 35mm film canisters full of gold grains, he said “This is a few thousand dollars.”

He drove the 4 wheeler up the creeks siphoning water (and sand) from the deepest crevasses, the gold settles in those places naturally.

Now for something I did not know existed. The Dredge. Something like a 3 story house with a mouth and a tail. 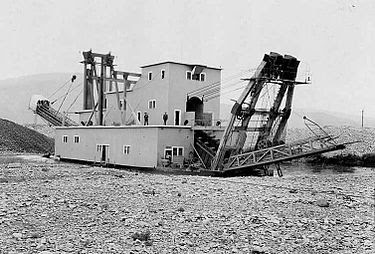 To get an idea of the size, look at the men on this thing. This picture was taken in 1913.This thing dug it's on lake while looking for gold and floated itself. 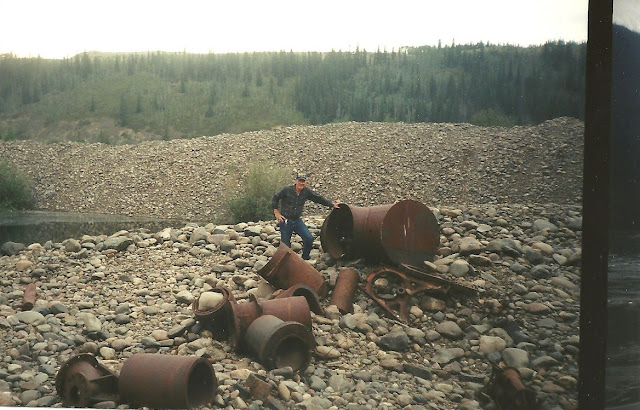 Behind where I am standing is where a dredge passed through. leaving these rocks dug from up to thirty feet down to bring up rocks and dirt along with the gold. These rocks were spit out the back of the Dredge as it went on its way. The metal scraps could have been from Dredge repairs. 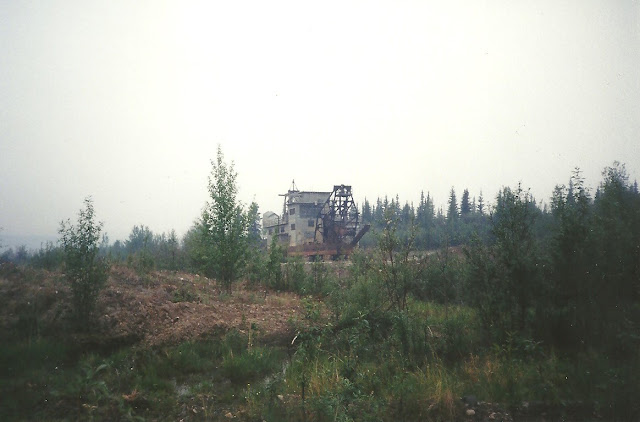 Above (in the distance) is an abandoned dredge we passed near Chicken.

This monster was built on site in a creek. The teeth on the long arm and its chain weighed a ton each. It worked like a giant ‘ditch witch’ that digs trenches using a chain. The entire Dredge was held in place by a sharpened pole as big as a power pole. The dredge used that pole to hold it in place as it dug a half circle ahead of the dredge pivoting on the center pole in the creek. The dirt and rocks were washed and vibrated the gold being heavier, then fell thru mesh of the convertor belt. The loose sand and rocks went out the back to dam up the creek.

Eventually a small lake was formed and the dredge floated.  Once floated, the anchor pole was raised and the big arm with the chain moved the dredge up the creek the length of the dredge then the pole was set again and the process started over again.The lake actually moved with the dredge.

An ingenious idea. They bought out the claim owners as they went up the creek. Thus all the lines of rock in the Yukon and Alaska. The smart miners bargained for a portion of the gold as it crossed their claim rather than a set price.  When the gold ran out the dredges were abandoned.

PS:
Alaska accounts for 25% of the oil produced in the United States.


The state of Rhode Island could fit into Alaska 425 times. 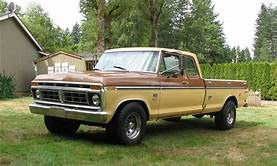 When I was there I had not heard of anything like that. I thought Alaska's money was in oil. Interesting. Do you see where they had the volcano and the ground lowered - you still could see where the water had killed all the trees?

Hummm interesting, were you able to keep those grains and tell what they are?

fascinating story about the dredge.

I have only panned for gold in a man made set up at the local museum when I was little. I would love to pan for gold in a real gold mine. Great story Jack. It amazes me how serious people will get about it. I have a friends that is hooked on panning for gold. They travel to different places looking for nuggets.

Off to Church
Lisa

This series is a great read!

Whoever came up with the first dredge was genius. Can't imagine such a thing and making it's own lake that followed along. Amazing. And to think that so much of the state of AL is still untouched. I'm loving this.
love n' hugs to two lucky travelers. Thanks for letting me hitch-hike