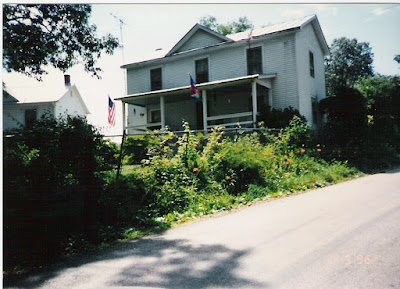 This is the actual home of the Walton's where the stories were written used in the long running TV show 'The Walton's', we actually found it in Virginia accidentally on one of our trips.

Tonite's  stuff:
The church had no water, even though back then it was in the city limits. The preacher was a determined man. He asked for volunteer workmen Saturday morning and he would show them how to get water. Ten grown men showed up along with a lot of us boys.

After thanking everyone for showing up, he stood on a spot towards the back of the property. Took a pick, stuck it in the ground in front of him then around him. He then measured the distance  and took a had saw and cut the handle. He started digging he turned in a circle about 5 feet in diameter. He pointed to some shovels and asked two men to shovel the dirt he had loosened.

As they worked he explained, we are digging a well. It will take some time, but we need water.

“Hey Preacher, don’t you need a water witcher to find water?” one asked.

Another asked, “Pastor, have you prayed about this?”

“Brothers, no one needs to search for water with a forked stick, and I don’t need to pray about it. God put the water down there. I have prayed that we would have the labor to reach it.” 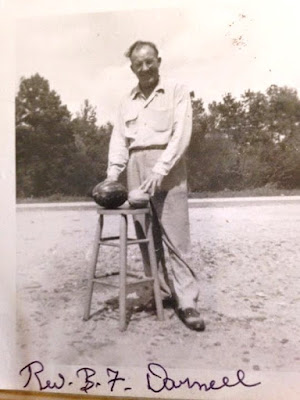 They continued to work. My mama and some ladies showed up with sweet tea, biscuits and fried chicken for the men. The work continued and the men ate in shifts. Everyone started to get excited, by the end of the day they were throwing dirt out of the hole and it was about 6’ deep.

Over the next three weeks a windlass was built to pull the workers and dirt out of the hole. When they hit rock the preacher took a star-hand-drill and hammer with a stick of dynamite down in the hole. He drilled about a foot into the rock two places. Set the charges and lit the fuses and called for the men to haul him out.Once out, the men rolled the preacher’s old trailer over the hole.
I thought it would be louder but we heard a WHUMP! The ground shook and the trailer raised about a foot then settled. After about an hour the hole cleared and a man went down to inspect.His voice echoed up the 30 foot hole, “We got water! He yelled.”

Every one of us jumped and yelled. It had been a lot of work, but the preacher said it, there was water down there.
That was my daddy, 1947, Burlington, NC 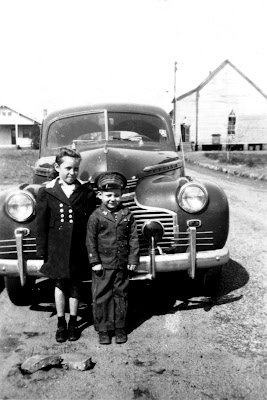 Oh my gosh Jack - they worked to help your dad for over three weeks? That sure would not happen these days. That was a wonderful story.

So I am a Walton's expert - the ground by the house was flat - this is on a hill - they must have built one like it on the set - it does look like theirs tho.

What a wonderful story, Jack! A Grand Man, indeed, your father.
I hope you're including this in your book of memories?

This was a good story Jack! It was hard work with a prize at the end. I do not think you could find a boy younger than 50 that would do labor like that now days.

You had a great dad
Lisa

That story was a wonderful tribute to your Father. What a wonderful man to call Dad. A great memory indeed and well worth sharing. We have snow and cold in Ohio today, hope that Florida sunshine is keeping you all warm!

The belief of the Lord and his followers is a powerful thing. I know how to water-witch with a forked stick and a stick of roots but I also do have the faith of the many strong-backed men that built the well for your daddy's church. What a wonderful story well deserved of a place in your memoirs. Your dad sure was a wonderful teacher/preacher of men. Your loving pride in him is very evident.
love n' hugs from up northwest of MA and you guys. Have a relaxing weekend.

Oh, is that you and your sister Shirl in front of the beauty of a '41 Chevy?
I LOVE IT

That took a lot of faith back with muscle to get that water. Great story.
R

determination wins out every time.