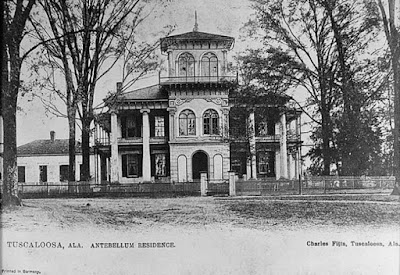 The Drish house (Tuscaloosa), one of the most haunted houses in America

It is hard to stop talking about the things you have seen just driving ‘round. I do not remember the name of the park south of the capitol, but it was in Alabama country. I counted about ten deer wandering around. I love to see  large animals up close.

While I am talking about past experiences with animals, I gotta say this. Normally cats do not care if I talk to them.  BUT last week on one of our walks I  spoke to a cat lying in the grass and he roused up and walked with us a hundred feet. He and I had a good conversation before he said, “I gotta get back home.”or was it, “I need to stop here to see my neighbor?” But anyway he did not come home with us. BUT he was nice!


Back to Alabama. On the back roads I saw this bird house. 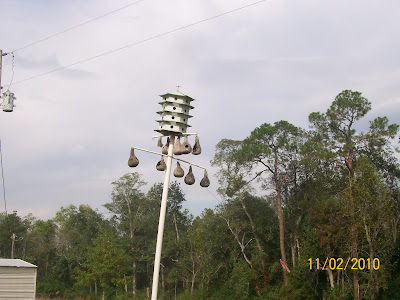 Actually I think it is an apartment complex. I remember seeing them all the time in the country at home. Not many people take the time now.
Then there is this: 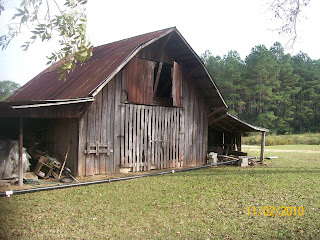 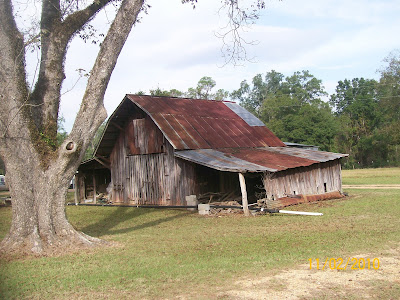 My mind loves barns. The work center of many farmer’s lives. I never milked a cow (but my family did), I never rubbed a mule down after a hard day’s work in the fields, but my daddy did. You see, I can only imagine the work these building have seen.

Imagine the activity this little town saw when the fields were white. Now only one car, most of the buildings boarded up. 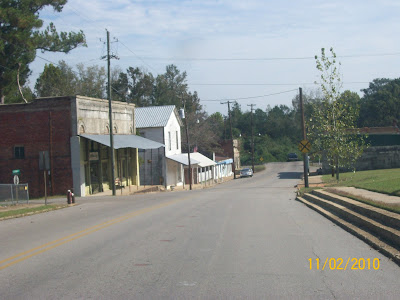 I am not a sports fan but I know some sounds of Alabama, Sheila ends every e-mail and comment with ‘Roll Tide’. I have heard ‘War Eagle’ from folks from Bama. I even knew the name Bear Bryant was famous worldwide Imma thinking.

Tomorrow I will go as far away from Bama as you can possibly drive and still be in the USA, next up. Alaska.
Nite Shipslog

My latest Alabama find in Blogs, thanks to Sheila,  is 'Sean of the South', If Shawn doesn't yank your chain, it's broke! The dude is positive about people.

The Tuskegee Airmen, the first African-American flying unit in the U.S. military, were trained in Alabama. Their accomplished combat record, including the accumulation of more than 850 medals, was an important factor in President Truman’s decision to desegregate armed forces in 1948.

The Saturn V rocket that made it possible for humans to land on the moon was designed in Huntsville, Alabama. 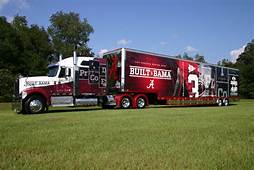 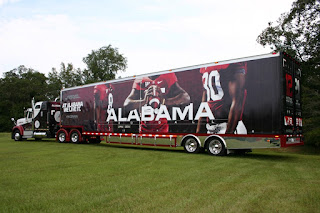 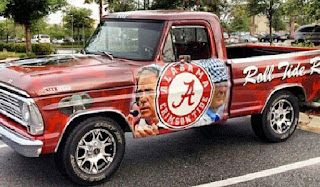 We have those bird apartments at the camp ground. They are always rented out. Many of the birds will sit out on their porches and make fun of humans walking by.
Cats can give good conversations when they decide too. When me and Nick go for a walk and see a cat, I speak to it. If it does not speak back, then its not a friendly cat and you can not pet it. But if a cat meows at you, it will let you pet it.

Are you really going to ALaska?
Lisa

"Roll Tide", that's my Team, MY Brother Donnie who I lost to lung cancer was the "Georgia Bulldogs", funny 2 Yankees would follow 2 southern teams. I was thinking on your post on Integration, I remember living up here in Northern New York, growing up on a Farm the first African American I ever saw in person was at the "O. C. Buck County Fair in Gouverneur, I was about 10 years old, I was staring at this big black man and he noticed me, he walked over towards me and I was getting scared, he then said in a heavy southern accent, "Boy, you never seen a Black Man" ?, I said "No Sir", he held his arm out and said to go ahead and touch him, he said "It won't rub off" ! I ran like hell to find my Dad and learned 1 bit lesson, Do Not Stare at People !!!!!!! Take Care down there, I am gaining and we are getting another storm !!!!!!

It would be neat or wonderful to time travel - I always wonder the same thing when I pass them - who lived there - what did they do - what was their life like..... so interesting. sandie

Loved this series, Jack.
... and you know, I adore SEAN OF THE SOUTH. Every morning his column accompanies my blow-drying/hair-fixin'. (I've had to postpone applying cosmetics, on account he often makes my eyes leak!)

Love Sheila, but I must sign off, War Eagle! :)

Me, again. I forgot to mention, Tom is a BIG fan of the Tuskegee airmen. These olden structures? 'Not sure if you've seen their pictures, but I think you'd enjoy 'Echoes of Time' on Facebook.

Yes, I too like all the pictures and history of Alabama...Alaska is very far away! It's always good to see and hear about all the places you've been. More snow here to day!

How I love traveling through your rides. You and Sherry have a unique life that a lot of me envies. The swallow tower of apartments and gourd homes is hardly seen anymore. We should build one as swallows sure do keep the mosquito population down. You know how much I also adore old barns, homes, and buildings. I do wonder who and what lived their lives there.
love n' hugs from up north, but not as far north as Alaska. Can't wait, when do we leave?