Thoughts of Canada and the Yukon, leaving Alaska 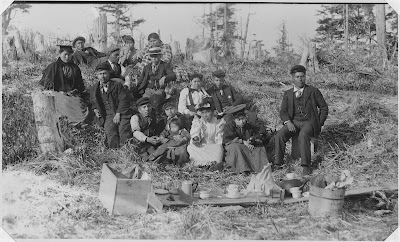 The Blog is Headed West after this trip!

Like Alabama this could go on for days to cover a state. But I just wanted to make some state introductions. WE have been blessed to see all 50 states. Alaska and Hawaii were special since they are not attached to the lower 48 and a big distance.


Before I leave Alaska I wanted to mention a couple things. These concerning the trip up and Canada as we passed thru.  (Besides remember Sgt Preston) .Remember this?’The Cremation of Sam McGee

by Robert W. Service (1874-1958)
There are strange things done in the midnight sun
By the men who moil for gold;
The Arctic trails have their secret tales
That would make your blood run cold;
The Northern Lights have seen queer sights,
But the queerest they ever did see
Was that night on the marge of Lake Lebarge
I cremated Sam McGee.  Etc…

Coming up thru the Yukon we passed Lake Le Barge and I thought of this poem. As with songs, I seem to remember just a few lines. We did cross a bridge on the Alcan named ‘Sam McGee Bridge’. The lake and the bridge made me quote what I knew over and over. LOL 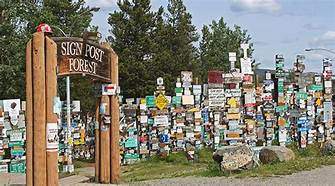 Then at Watson Lake in the Yukon, we had a ball at the Sign Forest. The origin of this was a young soldier, working on the Alcan was homesick in 1942 and make a sign. He posted it listing the miles to his home town. Other soldiers did the same. As of 2010 there were 76,000 signs including one with our names on it.  We actually found one posted by a friend and put ours beside it. We did not know about this, but made our sign on an old NC license tag and nailed it up! If you drive to Alaska prepare you sign in advance and have it ready! 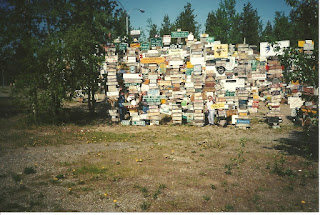 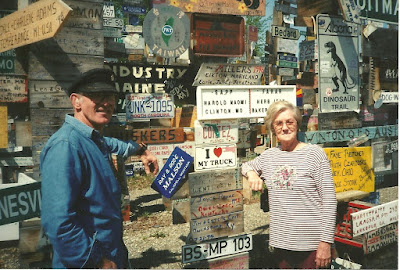 Our friends had tacked up their tag from Florida we actually found it 'CORTEZ' ours is 'UNK 1095'. (I found an old tag in the basement of the motor home and put our names on it!)

I mentioned we drove through Moose Jaw in Saskatchewan, Canada. There we saw this giant Moose and had to have a picture of it. 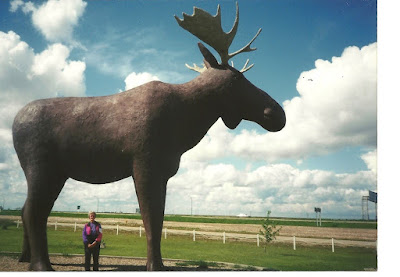 Definitely a trip and state that will not be forgotten.


PS: Final facts about Alaska!
The state's largest city is Anchorage; the second largest is Fairbanks.

The Alaska Range is the largest mountain chain in the state. It covers from the Alaska Peninsula to the Yukon Territory.

The Alaskan malamute sled dog is strong and heavily coated. It was developed as a breed by a group of Eskimos named the Malemiuts.

Alaska's name is based on the Eskimo word Alakshak meaning great lands or peninsula.
Posted by jack69 at 11:49 AM

Love the sign story and omg, the pics, especially the one of you two, Sherry looks awesome! What a fun life you've had together!!!

I love that poem about Sam McGee. I had a friend that memorized that poem and at parties when he had a drink or two, he would recite the poem:)

It would be nice to leave a sign for others to see. What a way to commemorate your trip. It's like I was here!
Trips like that one are usually only once in a life time . There are so many special places to visit and I find it hard to just to see all I'd like to see of Ohio. There is still much uncharted territory for me to see.

If only I could get my dear guy to travel again because Alaska is one place I'd always wanted to visit and even live a spell. We have a Moose Jaw resort just down the road a piece., great food/people, even a campground. The Sign Forest is amazing and memorable. Glad you left your sign. Dad also would recite that poem at a party or two. Thanks for taking us along for the ride. It's sure been an adventure and so much fun with you and sweet Sherry.
love n' big hugs from up north where the 'boys'are logging again while it's a bit warmer in the upper 30's-40's.

You and Sherry are so cute. We have a sign place too - it is at a barbecue place - well - you sure have traveled a bit - your motor home has a basement? Sandie

my daughter says there are lots of places in alaska to leave signs saying you were there and where you're from. it's nice to hear about another.