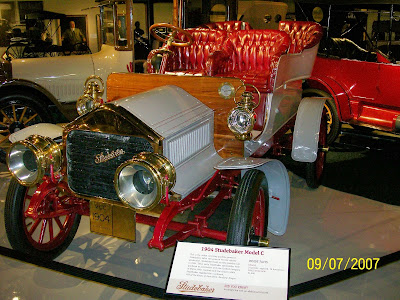 1904 Studebaker taken at the Studebaker Museum South Bend.
And now:
We only go thru this life once.  We spend the first part learning and also just plain having fun. It is a surprise when kids realize they do not get summers off after they go to work. Of course we KNEW it, but didn’t realize the impact it would have on their ‘fun time.’  Or at least I did.
That next part of life after the ‘learning and school’ is the JOB.  I have always admired anyone that KNEW what they wanted to do. I did get acquainted with a man who knew he was going to be a dentist, and he did. He enjoyed his occupation. Another wanted to be a DR. but realized as a nurse, he was just as satisfied helping people. Most boys and girls I knew were not sure even after HS or College, what they REALLY wanted to do.
My friends knew I wanted to be a marine from my youth. One nephew also wanted to be a marine, but my brother did not want that for him, Brother had seen too many marines die in WWII. His son did join and was a hero and lived.
Well my thoughts were not long sighted, I did join the USMC. And like 90% of my buddies lay in my bunk (on Parris Island) hoping I would wake up in the morning in my mama’s house and that was a bad dream. LOL
Most young people are like me. They THINK they know what they want, some spend that big hunk of their lives unhappy and just waiting for Friday and dreading Monday.
I started and quit so many ‘careers’ it ain’t funny. I was successful in each one, and in NONE did I hate to see Monday come.
Many people write books hoping to make $, but find they are in the ‘room’ with the starving artists. LOL Many of the Artists of the past did not get to enjoy their fame, it came after their death.
Someone very close to me has a couple degrees in the Medical profession, dropped a good ‘FUTURE’ to become an Artist. She is happy.
I never give medical advice. I can gamble with my own health doing what I THINK is right but not for someone else.
HOWEVER, I will advise a young person If you can find something you enjoy and it can provide a living, DO IT. Let your peace of mind and health drive you instead of the money. If there is $$$ in your choice, that is icing on the cake.
Sorry this is long. But what advice do you have for the youngsters in your life, IF THEY ASK?.

Nite Shipslog
ps: I met a Dr. in Missouri who had deliverd over 300 babies. He quit and his degree hung in a pawn shop he owned in Sedalia, MO. He was as happy as could be.
Posted by jack69 at 12:15 AM

If they asked for the advice, would they follow it? LOL! Honestly the best advice I would give them is what I told son when he was in his late teens and early 20sw. You can pretty much change the course of what you are doing, change jobs, change education, etc., but once you have a child you are bound to that child and you have to take care of that child. So many of his friends had kids in their later high school years or early adulthood. Some stayed and parented, some did not. I would also tell them to make sure they had 3 things they could do in case the other 2 failed. Hubby has this (not sure where he got it from) but he does have things he can fall back on if his present job failed him. He could be a guitar teacher. He could be in a band. I didn't have that to fall back on and look at me now, LOL. I honestly thought I had a career that would be around for the rest of my working days. I obviously was wrong.

Kids rarely listen to good advise. I tell them remember every time you were in the hospital cause when you get old, they always ask. LOL I have four daughters, one is a teacher, one works in sales and has never liked her job, one is a nurse and sometimes doesn't like the hours, and one works on the dock of a semi trailer manufacturing company ( works the hardest and sometimes loves it ). So go figure. I started as a young house wife, went to work for G.M. , then became an electrician. Jack, I think some times a job is a job. But it would be nice to love our jobs. Blessings to you and yours, Semper Fi. xoxo, Susie
ps. had two brothers in the Army and two in the Marines.

I think it's important to love what you do. Our jobs can last for a long time so we're happier doing something we like to do. I only every wanted to be a mom of a large farmland thankfully my dream come true, but not without some ramifications as I lost my husband way too soo and became a single mom that wasn't what I had planned but still I loved it and still do.

I knew what I wanted to be from about 4th grade on ~ and that is exactly what I went on to become!! Lucky me ~

I STILL don't know what I want to be when I grow up.......I've told the dozen grandloves the same thing. They laugh. I've worn many hats well but the proudest and hardest job ever was and still is, raising our family. I love being a mom and grandma but wow, sometimes it's daunting, isn't it. I wouldn't give it up for anything. As for what to advise kids, I've always told them to find something they love, no matter if it lines their pockets or not. Make it something that brings them pride, and never forget to use their prayer bones because HE is the one that's made life possible for them. Too preachy? I never stop trying. Great entry Jack.
love n' hugs from up north wishing you and Sherry a wonderful weekend.

If asked for advise by youth of today, I would tell them, "Join The Service" and make something of yourself !!!! My Uncles, Aunts, Brothers, me, my nieces and nephews, cousins, friends all went into the service. It was a good start to life !!!!! You and your Honey have a Great Weekend ! Gary & Anna Mae

Wow, Jack. There's little I can add to what you've said here 'with heart.'
Maybe I should feel bad, but I don't recall ever having any driving ambition to be Something or another. For the most part, I was happy supporting (mostly) nice folks who encouraged and amused me. Because I wasn't a "Big Wheel", I was able to leave my work at the back door. Until recently.
So! I'm leaving for work in a few minutes and plan to tender my resignation. More about that later! Have a great day!

I tell young people to do what they love. If it’s playing video game, learn how to design and program games.
Most people struggle with pursuing the things they love.

Great post. Doing something I have always wanted to do is exactly what I plan to do. More later.