The American Country Doctor & his car: 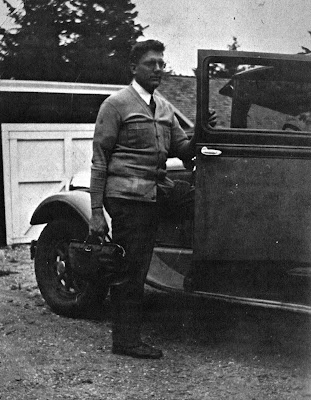 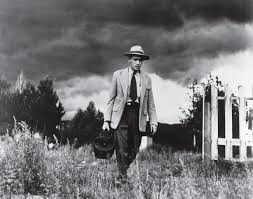 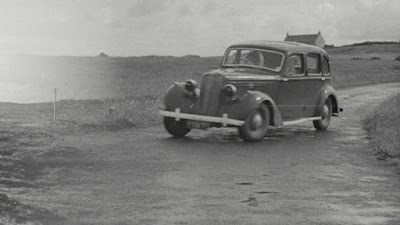 1st: I am a little behind I am studying to be a Dr. and am practicing on Sherry!
Now today:
My friend Buddy lived in Stanley, NC when I knew him. Our dads were Church of God Preachers. So we have lots of memories in common. He is one of the lurking readers who endures my blog. Dr. Weathers lived in Stanley and was the only doctor in that area. He was on call 24/7.  He is said to have traveled 450,000 miles on dirt country roads and delivered 3000+ babies in his time. He also said he was stuck on and pulled out of most of those roads in rainy weather by cars, trucks and horses.
The following is taken from an article about the Country doctor.

Buddy sent me this in an e-mail after the Jobs posts (Printed without his permission):

Dr Weathers was our Dr when we lived in Stanley.  I went to school with his son.  Dr Weathers made house calls, wore out cars and had a great bedside manner.  I remember the first shot he gave me for the Flu.  He told me to drop'em and lean forward a little.  Then he smacked on the right cheek of my butt pretty hard.  It shocked me, Mom was laughing so hard she had tears in her eyes.  I turned around and he was putting his tools back in his bag and he said, "Now that wasn't so bad, was it Junior?"  He had given me the shot with one hand while he smacked my butt with the other.   I didn't even feel it. He always called Mom 'Momma' and called me 'Junior"

Just so you will know Buddy, I still can’t whup you, but now I can run faster & farther than you can, since you became an old man! Besides I know that was a Tetanus shot not a Flu shot. You had probably stepped on or had eaten a rusty nail! LOL

So funny reading about the country doctors method of giving a shot. I'm still laughing, "Junior." I don't think I ever had a tetanus shot quite that way before. LOLOLOL You two have a most beautiful day. The sun is shining here but the air is cold....23 degrees this morning.
love n' hugs from our north where my guy is after ' the big one ' these frigid days.

What a cute story about the backside 'flu' shot! My mother recalls when I was so sick with the chicken pox (may have been mumps) that Dr. Post had to come to the house. I sure appreciate modern-day medical miracles (how's that for an unintended alliteration?) … but I think we all long for practitioners like the Country Doctor or Marcus welby, MD.

Brings back memories of our doctor... the only one in our small town, years ago. Did everything, on call 24/7, etc. Not quite as rural as Doc Weathers (most roads were paved), but still a remarkable and dedicated man.

Mom told me many stories of the doctors in her rural community who traveled around with horses or cars you showed.

He did everything, as you wrote. Amazing man as was his wife. I have a post about that time period coming up.

Those country doctors were the best I think! Willing to make house calls, etc. They really were dedicated to their field and not to what kind of money they could earn.

Enjoys this post and read aloud to Nick. Haha. Had me laughing with the smack on the butt.

Even though I'm a city girl, I do remember when doctors made house calls. We had a wonderful family doctor that did and missed him much when he retired. Course in the country I could imagine they had more miles to travel. Good men all.