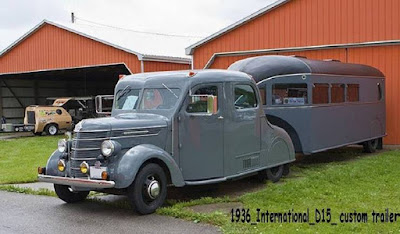 1935 International and trailer. That must have been the forerunner of the Sleeper cab.

For today, (Saturday)
One of our phones has been acting up. The phone would ring but the screen was black and Sherry could not answer it.  That same phone has had a battery problem, not holding a charge for awhile now. SO we decided to bite the bullet and go down to Mr. Verizon.

When you are old the above seems so wild. I remember when phones numbers were 4 digits and you did not own the phone. When we moved into a different the house, it would be empty except for a phone on the floor somewhere hard wired into the wall and it could not be moved. Later the numbers were made longer and then the magic dial tone was added. Oh wow, then the dial was added. BUT YOU STILL DID NOT OWN THE PHONE.

Now even kids 3-4 years old have a personal phone I think.
But visiting Verizon is no longer any fun for me. They keep back ground music going fairly loud. I once asked why? I was told it was for privacy, since there are no longer any walled rooms for consultation with customers. The music is supposed to keep your conversations private. All it does for me is 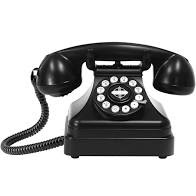 The first cell phones I purchased were $2000 each, they were referred to as ‘Bag phones’. They required a heavy battery. Then in a few years they with the advent of the flip phone, you could buy one for $30.  Now the price is above $500, but you  have actually bought a computer, camera, video recorder, encyclopedias, road maps,  and a zillion other things.

The earlier phones lasted decades, but today we continue to be the 'throw-away' society. buy today and in a year they will have the next mode. 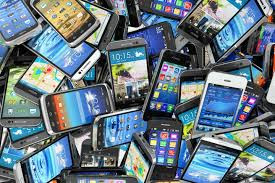 The zillion other things is what gets me, stomps me, confuses me, intimidates me and causes me to ‘Backslide’ and use bad-words. I am thinking about entering a monastery. My friend Frank/Protodeacon Michael, who knows electronics inside and out, has a son in the monastery. I think he joined the monastery after Frank got him one of the new phones. ;-O

WHO WAS IT THAT SAID BAD THINGS HAPPEN IN THREEs?

This is NUMBER 4, Either the ‘3 thingee’ is wrong or I have 2 more to look for in this series!  LOL

BUT SHUCKS, Life is good and I am smiling.

Glad you are still smiling! The new phones do have a stonger battery. I recently got a new one and now at the end of the day I still have 80 percent batter life left. Before I'd have to recharge it come the middle of the day. I've never had the problem of the phone call going blank before, but I have been cut off. Hopefully you managed to solve your problem. I didn't know about the background music for privacy, but it does make sense.

I have a cell phone but hardly ever use it only maybe to text once in a while. I still have one of the older house phones not sure if it's push button are dial its been a while since I took it out of the box. When we first moved here the neighbor had two little girls she would put them down for a nap and take the phone off the hook. It wasn't private lines back then so all the rest of the neighbors couldn't use the phone. One neighbor reported it and that was what they found out. Take care, Jean

I'd totally forgotten about not actually owning the house phone! Yes, I can close my eyes and see our new (to us) empty apartment with that ugly phone sitting on the floor.
I'm trying my best to get Tom to 'bite the bullet', but his cell's not that far gone. I don't remember the loud music (why don't they just get white-noise machines???) … but our last experience at Verizon wasn't particularly pleasant. Every little thing seems to be ala'carte ($$$) and I found the salespeople high-pressure. What-cha gonna do? In my opinion, VW is still the best game in town.

OMG.....The first "bag phone" I ever saw was in my brother Robert's [[a PIG sit on a chair?]] pick 'em up truck, I had to ask what it was! So...today I am so tech-savvy, I took my laptop to the computer guy because for four days it would shut down every time I started it. Another omg, he called me to pick it up, he'd removed the battery because of it's swelling and leaking all over the motherboard, another OMG! He said that I was lucky (pretty sure I am blessed with an angel on my shoulder) that it didn't catch on fire!!!!! N E way, almost a hunnert dollars later, I'm back online, do so prefer my laptop keyboard vs the iPhone...and I love Chatty Crone's comment...we've become so dependent on technology!!! It's awesome until it's not.

LOL- We had one of the first bag phones,too. Bought it in January of 1994. It was a monster but boy did that have good power and connection. I had a flip phone forever but got an iPhone 6 several years ago. It finally bit the dust and I have had my iPhone 10 for the last 3 years or so. I hang onto my 'stuff' as long as I can.
Good luck with those naughty words...I have a few of those myself. lol xo Diana

My cell phone did 2 funny things today. It said the temperature was 61 degrees in Phoenix with light rain. It was probably 61 degrees but no rain in sight nor forecasted! It also had my time then at 9:46 when the correct time was 10:03. I turned the phone off and when I turned it back on it was right time. That was weird!

Phones sure have evolved over the years! So true when you buy a cell phone these days you get all those things with it, email, web browsing and so much more! I think they plan for them to be obsolete as it seems like you get your phone and then a month later a newer model is available for purchase.

I couldn’t tell by the post if you actually got a new phone or not. If you did get a “smart phone” you will eventually love it and wonder how you got by without it. yes, they can be intimidating at first. I always struggle get the dern things set up and all the settings how I want them. But then I’m happy again. I go a new iphone11 around Christmas and love it mostly for taking pictures. I am always playing around with it and learning new things.

“Can you hear me now?”
Lisa

we had a bag phone too. got one when they first came out. used it in a couple of emergencies in the car. ended up costing a fortune to make calls cause of being out of roaming area. technology has changed but now the smart phones are so complicated. what would we do without verizon?