Wow I liked this :
Speaking of the fancy paint jobs on 50s new cars: 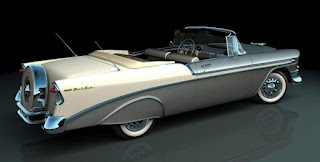 Now this for Sunday:

Monday we arrived in the Mts, and just after set up in a great site, it started to rain. It has rained steady until Friday morning when the sun came out with clear blue skies above. Beautiful day with a slight problem.

A few RVs have Air-conditioners stemming from the basement compartments, but most have the A/C units on top. Some with one and the biggies have 3; we have two. Due to the constant bouncing and many bad roads, ALL have a tendency to leak.

The repair is simply replacing a big gasket. So except for the weight involved, most anyone could do it. The work comes with lifting the unit off the hole in the roof. Then scrapping the old gasket off (the worst part of the job) and replacing it. Once that is done you must carefully lift and ease it back in place. 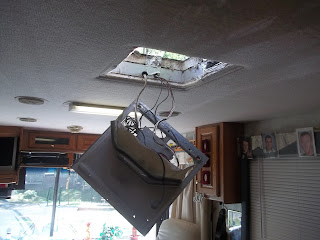 This is the controls left hanging by the wires as the guys up on top scrape the old gasket off. (I usually support the control unit, but it is not necessary, I guess I do it for looks. LOL) Note the clear blue sky. 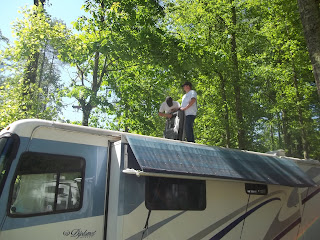 Final pic as they reset the A/C not very clear, except fot the clear patch of BLUE!. 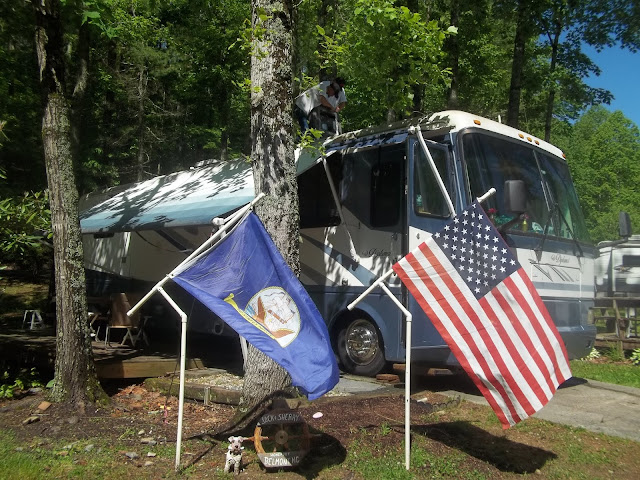 I have done the job 5-6 times by myself, this time since Sherry is getting older; we actually hired it done. The two young men did it in a short time (less than 2 hours) I usually take a half day.

It was timed so well. A few hours after they left the skies darkened the blue left and the ‘bottom fell out’, as my daddy would say.  We are dry. Now all I have to do is clean the stains from the inside ceiling when we get back to home port. 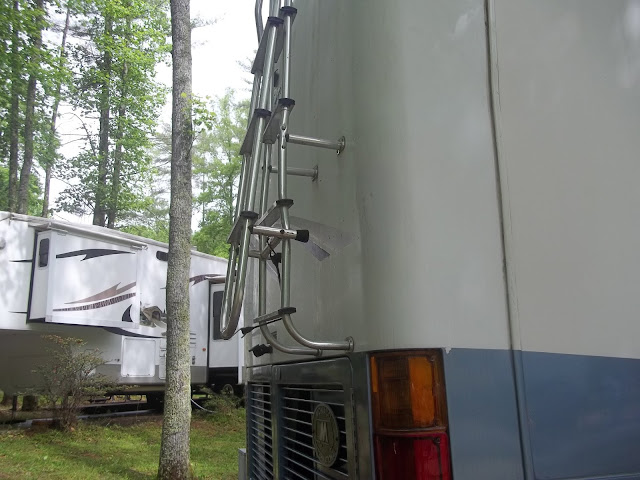 Before the A/C crew came I took advantage between rains to repair the ladder and had it ready for the boys to climb up on the top.
Nite Shipslog

Nice job fixing the Ladder !, Sorry about all the raid, kind of like up here when it Snows every Day for 5 or 6 days. Glad the Gasket is replaced, never seen a picture of one hanging down, do they have a support chain or something to hold them while hanging I wonder ?. Been under the Weather for a couple days, But getting back up there !, Sending warm, dry wish's your way,
Love; Gary an Anna Mae

I don't think it was Sherry getting older lol but I think it was wise to have the repair done by someone else. Good the weather held for you to get it fixed. May there be more sunny days ahead!

Thank goodness those fellas were available -- and had the expertise to get'er done! Tom just got off the phone with his sister in Apex (N.C.) who's sure bemoaning all the rainfall. Not exactly the way you anticipated your getaway, huh? HOPEfully it won't last much longer.

PS - Love how y'all have your flags set up!

From back in the day when I camped, I found out the those repairmen Know just how to do it ! Glad you had the wisdom to call them. They know what they are doing and make short work of what has to be done. I'm sure Sherry thanks you too. Not good to be without A/C when it's raining and you have to keep everything closed up . We started out with sunshine this morning but it's now overcast and looks like it's ready to let loose here with more rain. I'm hoping my A/C works.

When you own a home there's always something that needs done. I guess it's the same with an RV! Glad all is repaired and I hope you and Sherry have a lovely weekend. Thank you for your service in our military...the many branches you've served in!

My sister had a 1957 Ford Crown Victoria. It was beautiful.
Sounds like you can fix anything Jack.

Jack, Nothing makes me madder than not being about to do all the work we used to be able to do. Your RV is a nice one. Hope you had some pretty days. I am sick of rain around here. But oh boy, yesterday and today were nice except a rain break for a bit yesterday and looks like something heading our way in a few hours. Stay dry and safe. Blessings to you and the mrs. xoxo, Susie

Good job on the ladder. I’m glad you hired the AC job out this time. You kids need more time to play, not work.
Yep the rain is unpredictable.