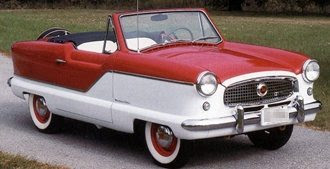 This was a very interesting automobile built by Nash and Hudson. It sported an MG engine. We owned a couple of them. This one is a 1961 but they all were about the same. Sorta like the early VW's but never caught on like the VW.

In the city’s wisdom, they removed the bottom of the U making a dead end street. The city named it Ann after the wife of Mr Stowe at the head of our dead end street. The abandoned land was then for sale. As a builder I bought the closed part along with more land around it. I built 5 houses here.

For the past three years while in our NC home we have walked. Walking by Mr. Stowes home, there is always a beautiful small garden about 15 feet by 30 feet. It is well kept and produces some beautiful vegetables, melons along with several tomato plants with big red tomatoes.

Nothing strange about that me ‘n you might say, until I tell you that NOT ONE THING IS EVER HARVESTED FROM THAT GARDEN! It rots on the vine and or falls to the ground. One of these days Imma going to get the nerve to ask, 'What is the story here?'

We have speculated:
A garden his wife always kept?


Dementia?
Loves to see things grow???
I bring this up only because, here it is again. Tilled neatly. Small tomato plants in a different area every year (Must be crop rotation) and other green things are popping their little heads out of the soil. They will grow and never grace the dinner table. ??????? Odd to say the least.

Wow! Now that's a mystery, for sure; particularly since the Mister regularly tills the land. My guess, he's helping feed the animal population. But gosh, I wish 'someone' (hee-hee) would ring the bell and ask.

Some thing is preventing him from harvesting the garden. Maybe a painful memory associated with it?. It's a shame since homeless or the poor would appreciate that food I think.

Hmmm that is a mystery. Maybe he leaves them there incase a passerby is hungry?. You need to get that story Jack.

It would be interesting to hear the answer to that mystery I can't imagine going to all the work of planting a garden without enjoying it all. Very strange indeed.

a mystery for sure. odd to say the least. if you ever find the answer be sure and let us know.