I ain't Getting Old gracefully 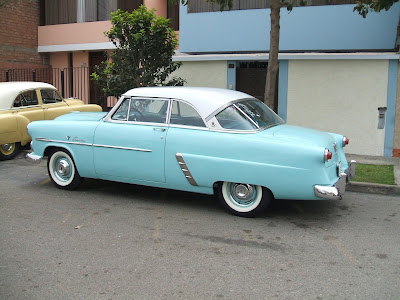 For Saturday:
I am trying to accept my ‘loss of something’ from past work history. I have never made so many ‘small’ mistakes in my life.

Today in one incident, I cut a board wrong three times. I had let my level drop once, I mismarked the next one, and last, I did not follow the line. I actually did not lose a piece of lumber; it was used on another step. But I laughed out loud thinking of one of my dad’s tales about sawing a plank. He said, “I cut that plank three times and it was still too short.”

I misplace tapes, levels, squares and pencils more than I ever did. I know these projects are for me. It keeps me off the streets and from running every one’s lives, BUT it is still a concern to me.

I said once or twice to myself today: remember the old carpenter’s rule, measure twice cut once! So I answered myself, I did, and still marked it wrong. LOL

The above is jest, and serious fact. You do lose some capabilities as you age.

I will never forget my brother Odis. Wood was his gem. He could do about anything with wood. I have mentioned as a trucker he drove past the USS North Carolina every week. He started building one. He ended up with a 9 ft. scale model. He won The ‘Gold Hammer Award’ from Mechanics illustrated. 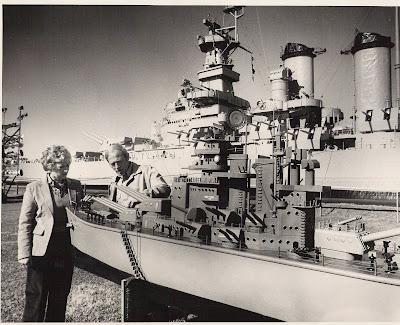 Odis's family donated the model to the Battleship museum. Shirley and delivered it. That is the USS NC in the back ground.

In his later years he built our mother a small desk. He was proud of it. My heart sank when I saw it. It wasn't at his skill level, more a kids project. It broke my heart, but I would never have hurt one of my hero’s feelings. 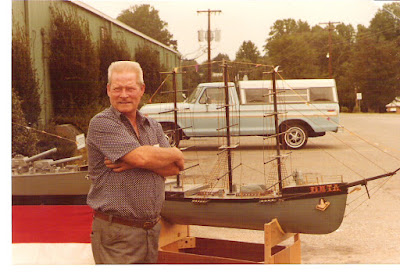 This is Odis and one of Columbus's ships the Pinta, he did models of all three. There were about 15 ships in his fleet.
I know skills can be lost but  I still enjoy trying, so I plan to keep on, and hope I know when it is time to hang up my hammer. LOL.

One thing I know is that I'm slower, I have to allow more time for everything I do. Some days I don't thing I could possible get any slower and then I do. Planning to have plenty of time for everything I do helps. There is no fast is anything I do. Don't worry about this little things, the main thing is that you're still trying and that is something we all must do. Try not to be discouraged, sooner or latter we all get old, Aint nothing we can do about that incept to keep on doing the best we can.

You still get on the horse and keep trying Jack and I think that is half the battle. So what if it takes a couple of times to get it right. At least you are having fun with it!

I read what you are saying - and it is very interesting. We are going through some of the same things here - especially my hubs. He gets so frustrated with himself. He can't do what he used to. Everything is harder. More mistakes happening. So I do think what you are going through is just another passage of life. Growing older isn't easy - but you are doing pretty good in my opinion. sandie

You have to be strong to grow old! Every day I pray before work that my body and my brains will hold out through the day. Medical technology changes constantly and I always worry I won't be able to catch on or keep up. I hope I also know when it's time to hand up the hammer...and the scapel...and the hemostat, etc! Hang in there, it sounds like you still have more projects in the making!

I remember those model ships … amazing!
What you're experiencing sounds like Tom and I've been acting for the last several years. Always good when you can blame your forgetfulness on someone else. LOL!

PS - See what I mean? I can't even make sense of a sentence anymore. SHOULD have read, ".....sounds like how Tom and I've been acting."

I know exactly what you mean, as we get older things don't seem as good as they used to. Just today I lost my Tupperware container!! I looked everywhere, even in the oddest places but couldn't find it. Then later I had a second look in the pantry and Lo and Behold there it was sitting under the Slow cooker. Can't even blame my husband for that, although he has trouble with measurements too.

yep - You just keep on, keeping on, Jack! That is amazing that model your brother built...and the other work he did, too. It is sad to see a diminishment in skills as one ages but such is life, I guess. I don't have the 18 hour a day stamina I used to have but can still put in a good day's work. At least now I quit before staying up half the night to finish something like I once did.

Bless you and Sherry and thank you for visiting my blog and always commenting. Happy Mother's Day to Sherry. Hugs- Diana

It’s great that you can laugh about it. The older we get also seem the less we worry about messing up things. We can sometimes find it comical.