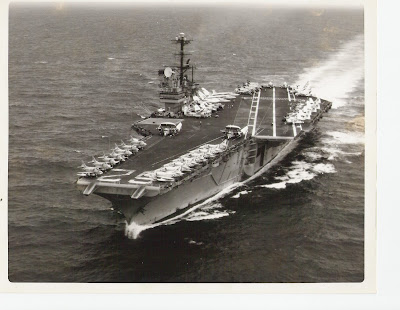 USS Independence CVA-62
For Friday:
I spent a lot of time in the military. At 16 I tried to get in early and was kicked back home just before the swearing in. Later at 17 I made it into the USMC, then the USAF and finally in the USN.

In the USN aboard ship at sea the Aircraft carrier (USS Independence with 2 mess halls served food 24 hours a day. We had over 5000 men aboard. Most military troops spend time as a ‘mess cook’ (Army and Airforce it is called KP, Kitchen Police). No body I knew liked their tour as a mess cook. Usually only 2-3 weeks a year.

Milk, coffee and an imitation fruit juice (affectionately called Bug Juice) was self-service. 90% of the time it was Lime flavor. Every once in a while there was grape or cherry, but the tanks continually ran out then.

After I was aboard for a few months I asked one of my shipmates, why we seemed to always have Lime Bug Juice.

Mate Malanowski said, “You ain’t had mess-cooking yet have you?”

“Because about the second day as a mess cook, you remember how much you despised Lime, so you make Cherry. After you find out you are making Bug juice ‘all the time’ and getting behind on the rest of the job, YOU LEARN! You learn if you put Lime in the tank, your job becomes less hectic, nobody likes that stuff.”

Now THAT's funny! I've not heard the term 'bug juice' since the summer of '61 when I attended girl's summer camp in Colorado. Now, I can't think of many lime-flavored food/beverages I'd go for. Well, except a good key lime pie. Yummmmm!

We learn as we go,..Every day of my life I've learned something New. Your experiences however have been maicj ,pre move; team ,ome/ Never feared pf big juice before, but now I know. Makes me appreciate good old Florida orange juice more and more.

Doing part of that comment over, too many typos...Your experiences however, have been much more than mine.

Lol. Definitely on the job training! I can't imagine cooking for that many people!

I got to my advanced duty station two weeks before my classes began. You guessed it, I spent those two weeks on KP. I peeled mountains of potatoes and washed pots and pans until my fingers wrinkled.

and I THANK YOU for your service once more. You were a dedicated serviceman for sure, serving as often as you did. God Blessed us with men like you.
Not so sure about limeade unless it maybe could be a bit spiked ! lol
loven'hugs from up north WI where it was a gorgeous day. Finally~

Yuk. I never like lime drinks. They actually do have “bug juice” in the convenient stores. Kids love it.

From across the bridge
Lisa