This coach is on the way home; more Mary Ann

The Saturn, a Car we towed:
Sherry always wanted to drive thru a tree. So on one of the passes thru California she did. 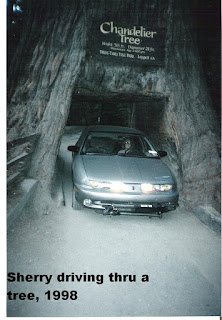 We now tow a Honda CRV
For Monday:
We are hoping to be on the road or in our back yard, as you read this. It has been a good trip except for the news and situation of our dear friend Mary Ann.
Mary Ann married early and had her first child at 15. She is a giving lady and is also a friend of Lisa who comments here on the Shipslog. When I mention Lisa her face glows. Just a day or so ago she said, “She is the smartest thing. Jack, I crochet, but that Lisa can read patterns and do anything with yarn, she is a genius.” Like Lisa she has crocheted hundreds of ‘caps(?)’ for newborn babies.
There is always a presence of Mary Ann in our motor home. Her picture with hubby Buck is prominent; also a beautiful Afghan made by her is on the couch. When Mark spent the night in the Motor home he would always say, “I slept with Mary Ann again last night.”  When Sherry mentioned Mark's statement to Mary Ann, of course she made one for Mark. He has actually worn it out! He says it is the perfect warmness.
Much can be said about Mary Ann. Most of all she is the example of a real FRIEND. Anyone is fortunate to have such a friend. Sherry and  Evelyn talk of Mary Ann often. They were all in the same school until Mary Ann quit to get married.
When you pray, remember her. She is a kid; I am a month older than she. ;-)

Nite Shipslog
PS:
My dad was Mary Ann's pastor. She told us once when she and some girls were out riding they ran out of gas, late at night. At a pay phone she called dad to keep from letting their parents know. She said dad brought them gas and sort of lectured them about being out that late. She said, "He was just sweet!"
Posted by jack69 at 1:46 PM

So sorry to hear about your loss of a good friend. They are and ti cine bt fir sure, They are treasures that cannot be bought and when we have them, we do hate to lose them. Hope you have safe travels and are soon home again. The sun is out in Ohio this morning and it's to be warmer and sunny ! Perfect kind of day!

Praying for Mary Ann! What a blessing she was for so many! And she does sound talented!

I remember that lovely afghan you showed a while back. I can't do anything creative like that, but sure appreciate those who do. Praying for Mary Ann!

Praying for Mary Ann. I do hope for a miracle.

My prayers also for your dear friend Mary Ann. Kindness and smiles like hers are rare these days so of course we pray hard for her as she rests her heart.
She's a lovely lady. Love the pic of Sherry driving thru a tree. I wouldn't mind doing that myself., or living in a hollow tree. Wouldn't that be mythical.
love n' hugs from our home to yours. Our gardens are being watered from above today. We sure are dry up here.

Such lovely memories, I made some today; drove to Apalachicola to see a wonderful friend from my year at OGA. We had a great reunion at her home and saw some awesome scenery on the way there. I "get" revisiting days from the past and yep; like Dar, I think Sherry looks awesome, as always, while she drives through trees!!! Hugs, Glenda

I remember visiting Mary Ann when she was camping in the same campground as us here at the beach. We talked a long time and even then, she had her crochet going.
Sweet Lady.
Last I heard, she is in Wake Forest hospital.