Work trucks of the past: 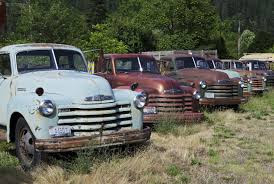 I took a page from Myra lately. Saturday I had scheduled a carpenter to be here to change out a door and repair a window seal.

He was going to be here at 10 AM. I started getting ready for him to remove the door, to move the job along. By 1030 no show and I decided to go ahead and remove the door to same time, and also to inspect the base for wood rot. We built this house about 25 years ago.  The outside trim and base of the double door had rotted.

11AM no one showed. I called his number. No ans. I text'ed him.  I got a return, his main job called him on an emergency and would have to reschedule. OUCH.

Since I was this far, the door was removed already and I saw not only was the trim rotted but our flooring in that area would have to be replaced.

So I went shopping for material and got the 6 foot hole closed by night.  Today after church I finished the job except for some painting and hanging blinds. 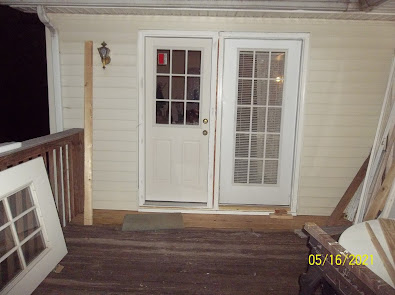 (I removed the full 6 ft. unit. I cut the door loose and replaced it with the half window door. The other door matched the window. I rebuilt the framing and replaced all the trim along with replacing the flooring just inside.)

I did understand his regular job took precedence but he must have a reason for not calling early. He is a friend, so I will find out later the circumstances.

This type of job in construction is referred to as a side job, where  guys pick up some extra cash on their time off.  Most trades men have done it.  Most bosses do not mind as long as it doesn't interfere with production.

Any way, I can do the work, but I keep being told to HIRE someone, I did try. LOL

He still should have been in touch with you if he couldn't have made it within the time he said he would be there, side job or not. Its the lack of communication with jobs like this that I find dissatisfaction with. Emergencies happen or other jobs take precedents, but it is so easy to text/call these days that there is no excuse not to. Seems like you were able to handle what needed to be done just fine, Jack, on your own.

It's a good thing you knew what to do and got the job done. I'm sure it would have been nice to have someone else do it, but getting someone to do it is all together a different matter. Being a side job means you aren't a priority. All in all it looks really nice and couldn't be more professional. You do do good work!

I just called Tom to come read this, and we're shaking our heads at the poor work ethic 'some' people exhibit. I mean, how much time would it have taken him to call or text and say something came up? When people don't communicate drives me crazy.
You do such great work, Jack. Wish you were here!

The poor behavior or some folks is appalling. We are going on one year for our solar panels. Waiting on the city inspector. We were told today. Then they email the hubby and say Oops sorry, Wednesday ! We have had so much rain which is unusual for us but if the electrician has to replace any of the work, I doubt the rain will stop his work. Avery and I are the two nicest people on earth. But here we are being duped daily it seems.
You are such a smart fellow and your work is beautiful. Wish you were closer to us. Avery use to do a lot more around the house but his asthma is kicking his butt so he tires too easy after standing on his feet at work all day. Just grateful we are both still upright!
Wishing you and Sherry a beautiful week. Enjoy your free time!

A few posts ago you talked about something that triggered the warnings. I don't want to type the word. The post before Fuzzy Huzzy

Bless your heart! It's so very frustrating to wait for a repairman to show up and then have to do it yourself ~ thankfully you CAN!!!

Besides bad work ethics, it was pure disrespect of another that irritates me.
I'm glad you were capable and able to do the job but the point is, we are aging and deserve a lot of what has become lost, accountability. You do wonderful work always Jack, but it would not have cost the fella a thing more than a quick text or call. Shame on him.
loven'hugs from up north where our wonderful weather has spurred on more projects than ever. Next, planting, planting, planting.