Memorable stuff from The Past: 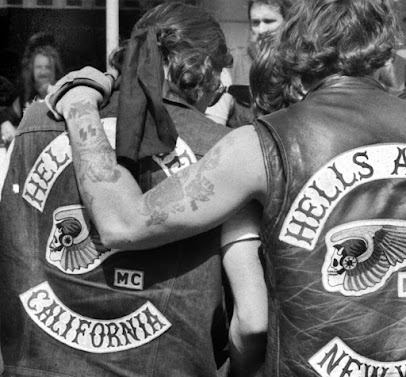 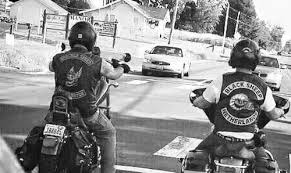 As a kid, I remember seeing tattoos mostly on veterans from WWII. Vets proud of their mother, girlfriend or the branch of service in which they served.

The tattoos that HURT seeing, were pictures of people (mostly Jewish) with a number tattooed on their wrists or arms from concentration camps. The tattoos gave me a terrible feeling of sympathy for them. 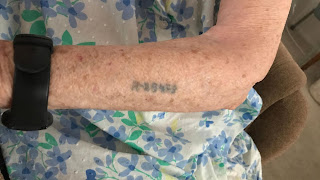 Later in life, a person with many tattoos became synonymous with ‘bikers.’  Somehow that has always stuck in my mind.

For a period of time while in service, the military doctors offered a service of removing tattoos if requested. One of my friends, Sam Cannon, had a couple surgically removed. They removed a huge panther climbing up his arm leaving the tail and one paw sticking out of the scar. He was advised to come back to finish the removal after the first surgery healed, HE NEVER WENT BACK, lol.

I had another friend with his girlfriend’s name on his arm, they broke up. A tattoo artist went over the name with a flower and covering it well. 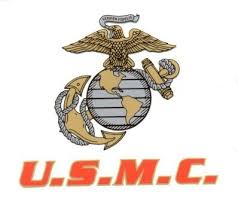 My tattoo is the USMC Eagle, Globe and Anchor. The old skin is age, the scar thru the 'S' is from a construction accident, not a knife fight! LOL 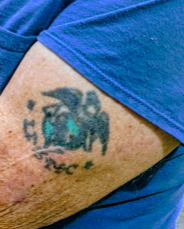 I was proud to be a Marine. The tat cost $5 downtown J’ville, NC. I was not drinking since I was too young to drink. Tattoo artists are alive and well at military bases and seaports.

To be fair, I wanted to add an USAF and USN tattoo, but by that time I was married and SHERRY said, “NO!” I think she feels like adding another tattoo would be like adding a bumper sticker to a Rolls Royce!” LOL

Something many would not think of, life at times became ‘uncomfortable,’ being an Airman or Sailor with a USMC tattoo prominently displayed on your arm. LOL There were many  comical instances. There were also some less than friendly ones. ;-)

All in All, I have never been ashamed of the tattoo, actually I think it was $5 well spent. After all I had plenty, I was being paid $78 a month and all I could eat! LOL

PS:  I have nothing against INK (lots or little), it is a personal decision. I have some tattoo'ed Grands and still love them to pieces!

My dad served in the British army during WWII. He was captured at Dunkirk and held in German prison camps for 4 years. During that time, he tattooed a Grenadier Guard on one thigh and a coat of arms with the lion and unicorn on the other thigh. I don't know what was used for ink but he had them until the day he died at age 93. He was a Grenadier Guard before the war. Patty McDonald

Great story behind your tattoo Jack! And so reasonably priced! Of course it was a few years back :) I mostly like tattoos except if the person seems to go overboard with them and they are all over their body.

I hope we never have a time in history again where people are tattooed like the Jewish people were during WW2.

I've always liked tattoos (don't have any myself) just as long as the person doesn't go overboard. My dad had one with red ink that I always thought was so cool. The tattoos on our Jewish brothers and sisters was a shameful time in or history. I sure hope Hitler is paying for his crimes.

Tattoos are fashionable these days.

I always liked the USMC tattoo symbolism. Agree with your commenters that too many can be overkill. When all the nieces and nephews started with the ink, it was a bit much, I thought. But, not my business, and have gotten use to it ~ it's a fashion statement for many. Love and hugs, Glenda

I had noticed the tattoo on some of your previous pictures and wondered about it so I'm glad you shared your story. It would be odd to be in another branch of the military and wear a marine tattoo. I'm sure you felt like covering it up sometimes, but then you were a marine and it should be something to be proud of too. Glad Sherry put a stop to the amount of tats you got. I agree too many is over well. One gives a statement about who you are. Thanks you for your service to our country!

Those 'marked' by the Nazis suffered so, the likes most of us will never understand.
I rather like your tat -- especially the story behind it. Not so, those who, like Victor mentioned, think it fashionable. Tom's pretty daughter, for instance, has both arms totally covered. I think she calls it a 'sleeve.' Then there was our sweet server at Mellow Mushroom last Saturday -- who, in addition to long GREEN pigtails -- had tats all over her neck. The mama in me sees that and wants to grab a washcloth and bar of soap. LOL!

I've often wondered what the tats on breasts and bottoms are going to look like when they are very old and wrinkled.....saggy, I suppose. Yours, however has held up well even with the scar. Sherry's so smart but I do understand your wanting one for each service you were in.
loven'hugs from up north where the sunshine feels so good today

I have two tattoos. One on my lower back and one on my wrist. I like tattoos. I think its a way people express themselves. Some people get tattooed during a bad time in their life. It feels good to them to feel a little pain. It’s altering to their body and just does something to their mood to make them feel better. Sometimes its after a break up or death of a friend or loved one.
Mine was just a wild streak. Haha. I do not regret mine either. I do wish sometimes they were a little smaller.
I am against tattoos on the neck or face. Thats just ridiculous but to each their own.