The House By The Side of The Road 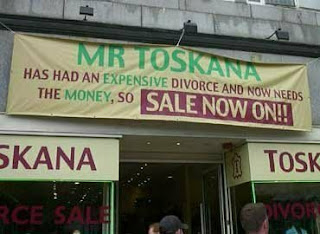 Don't you love it when someone tell the truth! 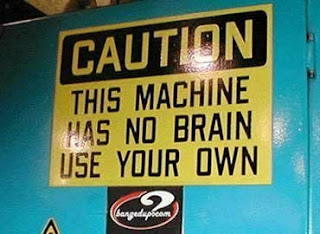 This sign need to be placed anywhere machinery is used.
Now for a Poem........

There are some folks who want to remain at home and be a friend to man, like the poem by Sam Walter Foss entitles the House by the Side of The Road. It always amazes me, that is one of my favorite poems. It is such a contradiction because I love to travel. My next favorite poem is ‘Home’ by Edgar Guest. Of course that is one of my favorite chalk drawings and story.
The house by the side of the road though is a poem written by a traveler about the different folk in the world.
He Says:
There are hermit souls that live with drawn. And
There are souls like star that live apart in a fellowless firmament.
There are pioneer souls that blaze their paths where highways never ran,
Then he says:
But let me live in my house by the side of the road and be a friend to man.
That is a noble goal, and I can appreciate it, but Sherry & I fall somewhere between The Hermit soul and the Pioneer feeling. We feel drawn to see what is on he other side of the mountain.
Now Old Edgar Guest nails our early home life, we had wonderful families, and lived in a home. Mr. Guest says:
Now Folks, it taks a heap o living in a house to make a home.
A Heap of sun and shadder and you sometimes have to roam.
Afore you get to ‘preciate the things you left behind,
Ye’ll hunger fer ‘em sometimes with them alus on your mind.
So, It don’t matter how rich you get to be,
Or how much your luxury,
It ain’t home to you,
Though it be the Palace of a King,
Until you heart is sorta wrapped around everything.
I learned these poems in Mrs. Melissa Grill’s seventh Grade. A hard but wonderful teacher. She tried to teach us to appreciate poetry in the small Mountain School at Valdese. She did plant a seed. I do love poetry sometimes. I like down to earth poetry. I see several poets on line. They are poets of their own, they write for their own satisfaction and sometimes put one on line. Paula is one, you have to enjoy that Texas slant. I have some of her poems going into my childrens story book. If you read Rags you read one of Debbie’s poems, she has a way with words. I loved that poem called ‘The Invisible Man. It just fit old Rags to a T.
Anyway, Sherry and I here in the hospital room with Sonny, I got to thinking about traveling and comparing Sonny’s life to ours. Sonny has lived his entire life within three blocks. His house now is two blocks from Where his mom and dad lived. Moving is not in his blood. He and Colette loved to travel, but like most folks they were glad to get back home.
Sherry & I are like the turtle, we carry our home with us. So we are at home no matter where we are.
Thanks for reading this ‘stuff’.
Nite Shipslog
PS:
Too much of a good thing, is never enough!
I know there are brook gladdened meadows ahead,
And mountains of wearisome height.
That the road stretches on into the long afternoon,
And a way into the night.
But still I rejoice with the travelers that rejoice,
And weep with the strangers that mourn.
Let me live in my house by the side of the road and be a friend to man.
Posted by jack69 at 10:10 AM

Alright, I cannot stop laughing over that first picture. The truth indeed, and with such exuberance.

I understand what you are saying about Sonny and travel, and because I bought my parents home,which was also my grandparents summer home, I have a strong attachment to it, but my real home is in my memories. ~Mary

Jack before everyone gets the wrong impression that I am a harlot a super poke is a nice little gift that does not cost an arm and leg, in fact free, and it means you like and respect that person and his wife if he has one. Those signs spoke for themselves on your blog. I gather Sonny is doing not so good. I wondered when you said they were going to transfer him but he had a fever. It has been a long haul for all of you and I am so sorry for all who care for him. Lucy

i WOULD NEVER WRITE ANYTHING DISRESPECTFUL on your blog or comments or my blog about ANyONE. Proof is to go back in facebook, and tAKE a look.

Gonna come back to read this later. John is bugging me to go with him somewhere. lol

Okay I'm back. Like that poem and the fact that you and Sherry live like a turtle butttt I don't think I could. I'm too attached to my old junk. I just might need it some day.

You know I love my home by the side of the road.
I would like to live right up town. Of course
I am about 5 blocks from town. I love the City
sounds. I wish Mrs. Grill could know how she made an impression on you as a young lad.
I love good poetry. I have to use my brain sometime.

I enjoyed the poems. Come by my blog and pick up a 'Kreativ Blogger' award, if Lucy hasn't already given you one. You always have something interesting to say. Take care, Sheila

I did move away from my hometown almost 12 years ago but I didn't travel far because it's a 30 minute drive away from where I live now. I don't think I would enjoy traveling all the time, a weekend trip away and I'm ready to come back home and that's something we haven't done in a long time.

Well I'm not much of a poet and I don't write poetry often and when I do it's plain and simple. I really don't read a lot of poetry. I finished reading Rags over the weekend and enjoyed it. I was a little surprised because I kept thinking I would see some of the excerts you've written in your Rags blog and they aren't there, lol. I couldn't have written that poem if it hadn't been for you writing entries in the blog, so all the credit goes to you. It felt kinda wierd seeing my name in print, ha ha ha.