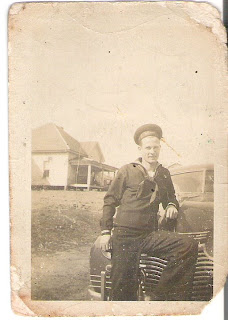 This is my oldest Brother Odis. During WWII. He was a Ships Carpenter. He became a master craftsman. He and his Wife built three houses. He built many small models, his goal was larger ones. 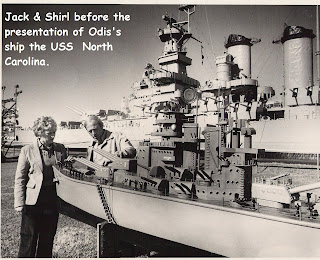 He built this nine foot model of the USS North Carolina. After his death, his family donated it to the USS North Carolina Memorial. Jim & Shirl along with Sherry and I took it to Wilmington, NC. The above photo was taken by the local Newspapre just before the presentation. I don't believe we took any pictures. 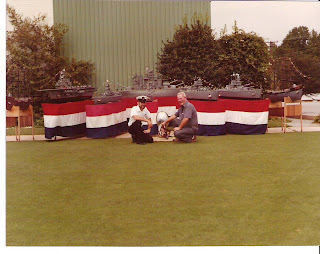 That is me on the left, Chief Darnell, posing with my brother in front of his fleet of ships. Two or three Battle ships, two carriers, a destroyer, and the Pinta, Nina & Santa Maria. They were in demand for display at parades and large building openings. They were on display at one sky scraper in Charlotte. Odis was a gentle but tough man. His hearing prevented many interviews which he avoided like the plague. His wealth was in his talent and ability. RIP Odis Howard.
That is passed history of my BIG brother, now an update on my Buddy..........

Sonny has had a setback. The plans fell apart when he was transported for dialysis. Seems us old folk accumulate Doctors like a cow pie draws flies. Sonny has at least five doctors, and each of them have associates. He has a Doctor for every ailment.

Evidently there was a breakdown in communications. The transport team picked him up and took him to the dialysis unit where they expected him to get up and get in their chair/bed whatever where the dialysis takes place. At the present time Sonny cannot get up and walk, evidently someone failed to foresee this.

If I have an update before I finish I will post it. The family was thinking all was fine. Now the pressure is on again to solve the present dilemma. As most of you know this is near impossible to work around a full time job, and not lose it or your sanity. The brunt of the pressure is on the daughter. Seems to always fall to a daughter doesn’t it?The female of the species is tough, but they have their limits.
Hopefully this last complication will be easily solved. About everyone who reads the latest book called ‘Gracefully Grasping for Dignity’ says, I wish I had read this five years ago, etc. Until you have faced it, you do not know how many decisions face us seniors. So get ready, your time is coming.
I detest being sick don’t you? I mean a cold is bad enough. Shoot, you can’t take care of a patient if you become a patient, huh? Plus the weather is no fun either. I think I will bitch just a little more then go to bed. Ha!
Thanks for the concern expressed about my buddy, and thanks for reading this drivel.
Nite Shipslog
Ps:

"I was worried that my Mechanic might try to rip me off. I was relieved when he told me all I needed was turn signal fluid.

As you slide down the banister of life, may the splinters never
point the wrong way.

My mind works like lightening, one brilliant flash and it is gone.

The difference between the Pope and your boss, the Pope only
expects you "To Kiss his ring".


The only time the world beats a path to your door is if you are
in the bathroom.
Posted by jack69 at 11:31 AM

Wow,that was a great tribute to your very talented brother.

I also have your buddy in my prayers.

You are a good person and friend to others.

What a talent your brother had, actually your whole family is very talented. It's hard on everybody when you have to spend awhile in the hospital, nurse that cold so it doesn't turn into something else. Take care, Sheila
PS. While at glass place, the lady came out and was spraying lysol on the counter, man came in and said, 'she was only at the counter and in that chair' (pointing). I thought 'what in the world did she have?' I should have asked, I made sure I washed my hands when I got home...ha. Hope it was enough...

You were blessed to have a very talented brother. You have good memories and so many nice pictures too. I hope your friend is doing better now and not in pain..... I will pray for him.
Sandra

We look so young there. Glad to see the pictures
again. Love those Sailor uniforms. I can't believe we didn't take any pictures. Only pictures were the newspaper ones.

Nice pictures of all of you. I like that old one of your brother and noticed the old car. So sorry Sonny has had a set back. Sometime I think things were better when we only had one doctor. Guess the specialist are very important though.

Funny, I do better with a serious illness than I do with a chest cold. I whimper and complain then! As I was the caregiver of my family, I would have to agree with you.

Hi Jack, Hope your sick buddy is doing better. Staying with a patient is worst then being one. I went through that in December when my husband was in one for eight days. Like Sonny he had four are five doctors. Nice pictures. Take care, jean

Hi Jack...did you know that camping in an RV is on my bucket list. I think our family would love this! Especially as much as we like to grill, hang out, and read, and be outside. I am afraid of storms though. Have you ever had to live thru some tornadic storms in the camper/RV? I dream of doing what you are doing one day. We've talked about selling everything some day and taking off but we'd miss our house! Our house has a lot of upkeep with the grounds though...so you never know. Hope you all have a nice evening!

Love all the pics!

Your brother was so talented..wow...I have to show Jeff those ships...he loves stuff like that...

Keeping Sonny in my prayers...

I love all the pictures and memories you share with us. I hope you're over your sickness now the way the weather has been wishy washy it's no wonder everybody is getting sick.