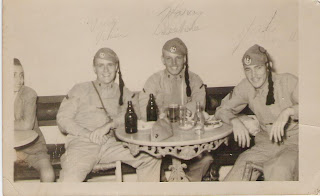 Looking back to the mid-fifties, Marines on Liberty on a little island in the Med called Corfu. 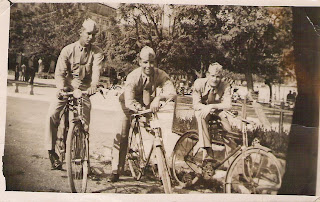 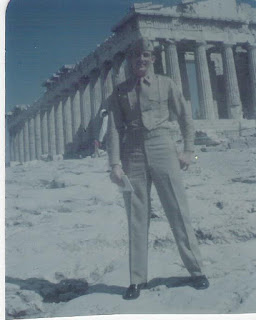 The Marine on liberty in Athens, Greece. This was my first time here and the Accropolis was open, not fenced and you could wander about. The last time I was there it was Americanized. GAtes and charges to climb to the Parthanon.
Today's entry (Rain, cool and messy in North Carolina)........

We are waiting information on Sonny. We got a call he was headed for Rehab. So the move is on. I have slept off and on for two days now, maybe I am getting old. LOL

I went to the front to catch the trash before the truck comes and ran into Shirl and Jim Arp chatting over out gate.
http://www.rockabillyhall.com/JimArp1.html
Jim was a success in his early years in the music field. He was a Rock n Roll singer and guitarist. Opening act for many of the greats of that day. He was in a couple movies and has written a couple books. He lives in a frame house just up the road. He has painted his house blue. That is not unique in itself, but he used a two inch brush. He does have patience. He is also an artist in oils. His last years of work were as an engineer and DJ at the Kings Mountain Station here in NC.

He told of a singer with their group as they toured, who had cut a #1 record on the charts. He was getting paid the same as the others. They talked him into asking for a raise, sort of to test the waters. He did. The next day the singer was handed the keys to a new bright colored Cadillac. Of course he was thrilled until the next month when the lease came due. The manager had leased the car in the singer’s name. The singer did not appreciate the humor in the act, turned the car in and quit. (OH yes, I think I mentioned a few months ago about Jim, he did make it to the 'Rock-a-Billy Hall of Fame'.)

Funny how someone like him who loved the crowds, is reclusive now. On the other hand Sherry’s brother Vernon, who was never out going with a crowd, now loves the crowds and attention. He has received many local awards for volunteer work in entertaining, he is the one who fell out of a tree a few months back, he is now back in full swing with his group, and entertaining.

PS:
HER Husband is someone who after taking the trash out, gives
the impression that he just cleaned the whole house.

Shirl was quoted as saying: My next house will have no kitchen just vending machines and a large trash can.

It used to be only death and taxes. Now, of course, there's shipping
and handling, too.

That is a good idea Shirl has on the vending machines and a large trash can. I hope Sonny gets along well with rehab. Now I have to go to the link above. Lucy

When I look at the pictures of a Young Jack I
can't believe we are this age now. A lot of
water has run over the dam. I have to remember
I wasn't born this age. You were a handsome
young boy and still hansome in my eyes. Smoky
said the other that you were a hansome guy.

It is sad to think about someone that almost
made it and doing nothing now. I guess we all
are has beens but still entertaining and enjoy
it.

Bet that blue house is pretty but it must have taken a while. Once I painted a picture (I'm not a painter) of a peacock with a toothpick. You know each little feather. Glad Vernon is back to par and hoping Sonny keeps improving. I'm with Shirl on that vending machine and trash can kitchen.

I love the photo in Greece. I often wonder what my thoughts will be upon returning to Europe now. I hear so much is fenced off, and I suppose it's need to protect. Yet, it just takes so much away by doing that!

I LOVE Shirl's idea of vending machines and a large trash can, I think I'd like that too! Trouble is I know many items would still not make it to the trash can unless I pick it up and take it there. ::sigh::

Keeping Sonny in my prayers ... he shares the same name as my husband.

Yes, that is a very patient man, painting it with a 2 inch brush...ha. I thought Shirl already had that vending machine on order...ha. Have a great Thursday, Sheila

I'm glad Vernon is back entertaining again. I like Shirls idea of the vending machine and trash can. No mess no fuss!