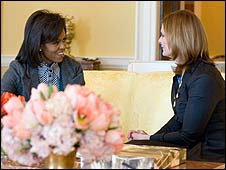 I did not vote for President Obama, but for the good of our country I hope he succeeds. I was not for a 'stimulus plan' but President Bush started it before he left office, not President Obama. I will not blame him for the Stimulus plan, it was not his idea, he is just following through.

Now. I wish they would drop the plan and let our business sink or swim on their own bad judgements.

But this latest Gaffe, is unforgiveable. I am horrified mabe mortified. I may never recover from such insensitivity.


Okay today I will venture to the realm of politics. Or maybe it is the realm of what I will call Political Crap. Or as my friend Debbie would say Flap Doodle. I am told from the best of sources Flap Doodle is nice words for Bull-$%$#.
Now To give society its dues, I guess it is nice to know which fork to use. I don’t know why you have two forks and two spoons, when at our house me made out with a fork and a spoon (Using the edge of the fork to cut something to size to eat.). I did learn something from the movies of officers training (that some sailor misplaced in our compartment for our entertainment on long cruises). I learned that you are expected you dip your spoon into your soup with a motion away from you. We weren’t supposed to view these movies because the Navy knew it would be a waste of time to teach the animals etiquette. You are also supposed to use all that hardware you are given ten forks and five spoons from the outside in, or is it inboard out. Shoot I failed that one. I usually look at the host and use whatever they use.
Okay now that you know I am cool. I can ID a soup spoon. You also know that I know how to eat soup without embarrassing anyone. I want to talk about the worst thing that could have happened. I expect a war between Great Britain and the USA. Someone says Our President and his Wife gave the ‘wrong’ gifts to the visiting dignitaries from the United Kingdom. Now Let me make this clear, the Prime Minister NOR his lovely wife have not said a blessed thing about the gifts. It is the media. What a gaffe, wow!
I’ll bet the children of these families have so many ‘things’ they do not need, ONE more thing, right or wrong. They should not care less. I saw an entry the other day where the reporters were crying because they were losing their jobs. “There won’t be enough reporters for the important news.” Well there are still enough to bring up this sort of STUPID headlines. Now the president will need a ‘GIFT ADVISOR’ so he won’t mess the next one up. Wow, the world is falling apart, and someone makes headlines by saying the Obama’s do not know how to give gifts to their guests children.
Don’t you love trivial CRAP!
Nite Shipslog
PS:
Today before you say an unkind word - Think of someone who can't speak.
Before you complain about the taste of your food - Think of someone who has nothing to eat.
Before you complain about your husband or wife - Think of someone who's crying out to GOD for a companion.
Posted by jack69 at 11:01 AM

It is amazing sometimes what comes out of the media. I guess Shirl's snow woman is history today. Enjoy the warmer weather. Prayers for Sonny and Louise. Take care, Sheila

It is so true that the media is far to over reaching on anything political. I agree with all you said although I do not eat soup the proper way. I know how but it is not right to just spoon the soup in any old way and enjoy. lol Lucy

Nice entry today, I agree with one comment you made, I think we should let the companies either sink or swim on their own!! No budy came to me when times were lean and said here, take all the money you need and get back on your feet, I went out and got another job, sometimes 3 jobs and working a weekend was normal to help fill the coffers to pay the bills!!

Hope you are both doing well, I think spring is slowly coming our way. Take care!!

my philosophy is why put more than one spoon or one fork out, who wants to take the time to wash them all?

the media is funny no matter where it is and what it is reporting; the other day they were highlighting a high speed chase here on the news keeping constant coverage of it; I couldn't quite figure that one out

hope you and Sherry are having a good Saturday

I've never been anywhere where you used that much silverware so I would have no idea what was what. So there's a proper way to eat soup huh? Ok, I dip my spoon in soup with a motion towards me, it seems logical to me that you would dip it in, lift it up, look out mouth here I come. Simple! I have a hard time just trying to keep my elbows off the table on the rare occasion we eat out. I would be so uncomfortable if I had to go somewhere where you're prim and proper.

I hadn't heard about the gift but it doesn't suprise me that the media would find that worthy of reporting.

The Companies have gotten themself into this
problem being so free with everybody's money.
Private Jets, CEO Salary, Big bonus to everyone.
They should have to dig themselves out of the hole. Vacations saying they were meetings, etc.
Oh well thanks for the etiquette lesson.

What a bunch of Flapdoodle...the Media is just dying to air crap that doesn't even matter...trying to make Obama look bad I guess...

A spoon is a spoon to me....I would make a fool of myself in a fancy place...lol