We all love AIG give them a bonus! 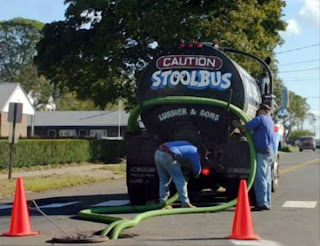 Now you know how politicians promises are transported! 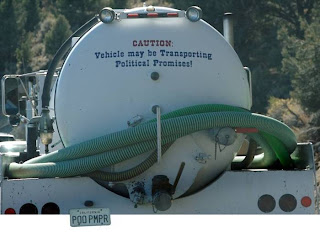 This is an actual load of s.. I mean political promises. At least they all go to the same place.
Now today's frustration........

I know you are not mad about the AIG executives getting 179 million dollars in bonuses after sinking the large company. After all they did come to work most of the days they weren’t golfing. And they made the best decisions they could. They were just wrong. I do admire the president for publicly condemning them. They claim they had no choice they had to pay the bonuses because of the contracts. I must be daft, but I thought bonuses were paid for outstanding performance, can any of them claim that? I don’t think so.
I think the average American, who could live their entire lives off one bonus received by these guys, is just a little sick of trying to bail out stupid people.
Well I guess you couldn’t call them stupid, they got the meat, the tax payers got the bone.
I guess I am to simple, I always figured bonuses were like tips to a waitress, paid for good service etc. AIG AIN’T SUPPLIED GOOD SERVICE!
Sort of like giving a starving person $3 and they buy a cup of Starbucks with it. Oh well.
We are in the room with Sonny. Yes, I got a kiss on the way up on the elevator, since you asked. I have always made it a practice to get a kiss as often as possible, Sherry keeps my heart active. LOL
Hospitals amaze me with noise. The Food card and trash carts are VERY noisy. Even I can hear them. Sonny has been here for three weeks now. They are saying he cannot live without dialysis, and he is wanting to stop it because it ‘nearly kills me’, he says. Terrible decisions face us OLD folk, the Doctors have us living way past our bodies capabilities to house our minds.
Nite Shipslog
PS:
I think folks go home from the hospital to get well.
I forgot Green on St. Patty’s day, but then I am only part Irish.
Posted by jack69 at 3:03 PM

This is sort of a repeat, but I am sort of twice as mad! Now the AIG folk say they will give the money back......From what the government loaned them! Sort of stupid if congress buys it.

It should have been checked out before the
government gave the money, now they are trying
to get them to return it. Thats a joke.

What a lot of BS. We would be on easy street
if we could just get 1/4 of the bonus. They are
being questioned now for all that is worth.
Don't get me on my soap box.

My heart goes out to Sonny. What you said about giving a starving person $3.00 and they go to Starbucks reminded me of something. Once an old high school friend wrote me about what a hard time she was having. I'm imagining no food on her table. She did write back to thank me and told me what she spent the money on. lol Had her nails done, bought a pretty plant, and some other such thing.