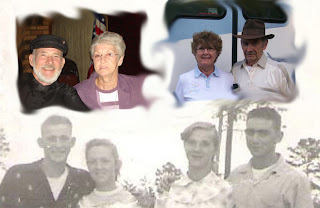 The lower pictures are me, Sherry, Marion & Dallas, friends in 1956 the insets above are us this year. Dal & Marion came down through Florida and we got to send a day together. Dal is retired from raising Turkeys and Marion is still working (to stay away from him, Nah, she was the kid in the group, maybe next year she will retire.) 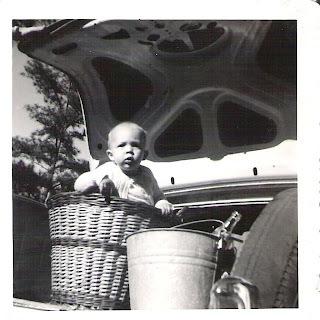 Our son Jack in the laundry basket. I know you guys never went to the laundry mat to to do clothes. Note the spare tire. Back then when you bought tires you kept the best recap of the old ones for the spare. 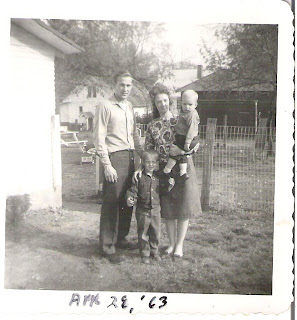 A young pastor of a church in Moberly, Missouri and his family in 1963.
Now todays taxing entry....

I think it was a couple months ago I got our tax stuff out and figured our taxes and we owed more than I wanted to pay. I put them in the drawer, hoping that when I take them out again they will have shrunk. What do you think, any chance? NADA

Sherry says to me the other night as we sat at the hospital, you didn’t do our taxes yet! So it is getting about time. Maybe we can be like some Cabinet appointees, and say, “I forgot that.” Think it will work?I didn’t think so.

Hope you filed and are getting tons back. When Sherry and I both worked we had our taxes taken out like we were single or married with no dependants, so we would get a refund. That was always a great time. You can bet I filed early then. Funny, it was already our money and somehow I felt the Government was ‘giving’ us something. One year in my early twenties we were due $120 refund. I can’t remember what we bought, but I spent it twice. Do you know what I mean? While we were waiting for the refund I saw something we wanted (or needed) for about a $100. I said ‘hey we have that much refund coming, let’s go ahead and get it.’ Later I done the same thing on something else, forgetting I had already obligated that refund. Well I learn hard, but I learn. After that a refund check was not saved or spent until it was ‘In our grubby little hands’.

I think a lot of folks still do that, we learn from our government, huh? Take care and thanks for coming by the shipslog.

Nite Shipslog.
PS:
ARTISTRY OF INSULTS. When Insults Had Class (no 4-letter words!!) These glorious insults are from an era when cleverness with words was still valued, before a great portion of the English language got boiled down to 4-letter words, not to mention waving middle fingers.
"They never open their mouths without subtracting from the sum of human knowledge." - Thomas Brackett Reed
"In order to avoid being called a flirt, she always yielded easily." - Charles, Count Talleyrand
"He loves nature in spite of what it did to him." - Forrest Tucker
"
"Why do you sit there looking like an envelope without any address on it?" - Mark Twain
"His mother should have thrown him away and kept the stork." - Mae West
Posted by jack69 at 1:09 PM

Finally made it to do my blog. The whole sorry story is there. How can one simple (but you don't know it is simple) wreck your day? We do not make enough to file taxes now that we are retired but never ever made enough to get much back but let me tell you what we did get our calloused hand took it. How is Sonny? Did he get moved to rehab? I know it is trying and wears a person out sitting in a hospital day in and day out. Lucy

You have to be a rich politician if you don't want to pay your taxes... The only thing is... you might have to pay them later if you run for a high profile office!!

Oh, the dreaded tax time. You just had to bring it up...ha. I hope everyone in your neck of the woods is doing fine. Wishing the best for Sonny. Take care, Sheila

Well I have filed my taxes and had to pay.
Get nothing back. We are taxed for everything
we buy. I would like to tell them where they
could put IRS Forms. It is a no win problem.
Jack fill your taxes and weep. They will be due
again next year.

Got mine in the mail yesterday. Cute son in the laundry basket. We used to use an oblong basket that belonged to our landlady to put our daughter in so I could go on service calls with Mel. He drove a panel truck and it didn't have a passenger seat so I had to sit on a wooden box. I loved those rides though.

Our accountent isn't going to be happy with us this year. I've had paperwork strung across the kitchen table for a month or more. Gary is slowly digging his way through it all. If we don't get it to our man pretty soon he aint gonna be happy, lol. Not my fault. Heck I know we won't get anything back I just hope we don't have to pay in. Gary hates paperwork.
Debbie