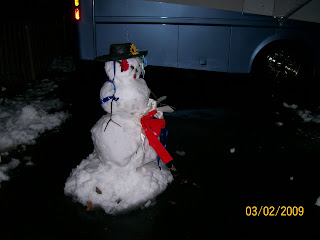 We were at the hospital all day, we got home about 8PM. We were greeted by Shirl's Snow woman. She named it Evelyn in honor of Evelyn who is still suffering down in Florida. 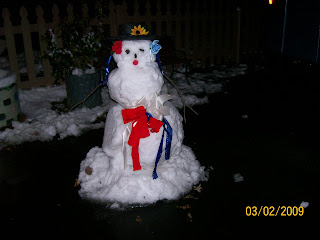 She built it on the asphalt, so the snow around her melted. I thought the hat added a touch of class for Evil, I mean Evelyn.
Now for today's exciting adventure!

Well, they predicted six inches, we got three. You all know in North Carolina we don’t have much snow removing equip. We were to spend the day at the hospital with Sonny, so we left before six.
Problem was, I couldn’t get out of the motor home at first. Dummy me left the awnings out and they caught about four inches because nothing melted, you know like a bridge freezes first. I finally got the awning up at the door enough to get out. I tried to get some of the snow off the large awning, but did not have much luck. It was swagged about eight inches.

Jack is supposed to know that stuff. Sherry said Evelyn and I said the awnings should be in, but nobody reminded the master mind. Hahahaah!

The Shirl e-mailed last night to say I should have parked in one of the three open garages here. Shoulda thunk of that too, but we are not used to having a garage near. So at least I did put some warm water on the wind shield so I could see and took the car around front and put it in the garage. Saved my life this morning also. (I'll tell her I had planned to anyway, can't let folks think they know moren U.)

I could tell, it was so obvious, the girls are out to get me.

Now they are threatening 15 degrees tonight. Oh I know, you guys in NE and NY and PA and Northern AL and most everywhere else, that ain’t so bad. But to be honest I have no idea about the anti freeze in either vehicle. SHOOT THIS IS THE FIRST TIME WE HAVE SEEN TREES WITH NO LEAVES IN TEN YEARS!!!! I THOUGHT THEY WERE DEAD AT FIRST! I had to be reminded I left to keep from raking leaves in the fall!

Anyway we had a good drive in. I can drive in snow, and the ice was minimal. Fresh snow grabs good.
Sonny was out of the room for five hours + for dialysis. He comes back very disoriented.
Thanks for everyone who reads this blarney.
I will get the book orders out as soon as I can. I know you all have said no rush, but I want to get them in the mail.
Nite Shipslog
PS:
The snow woman is for Evelyn, still suffering down in Florida!

The first product Motorola started to develop was a record player for automobiles. At that time, the most known player on the market was the Victrola, so they called themselves Motorola.

Celery has negative calories! It takes more calories to eat a piece of celery than the celery has in it to begin with. It's the same with apples.

Chewing gum while peeling onions will keep you from crying!
Posted by jack69 at 8:43 PM

I shoveled all the snow from around the snow
lady with that big wide shovel. It was about 4
inches. I got your flags in and put them in the basement. I tried to uncover the Gazebo that the wind blew into the next yard. I wanted to make the snow lady bigger but the snow is heavy. The rest of the week we will get up in the 60's and 70's. So there.

Who knew Shirl was so talented at snow sculpting?Her list of talents continue to grow. Great touch with the hat. I think Paula is rubbing in her Florida like weather...ha. I hope tomorrow is a better day for everyone...Sheila

I enjoyed your snow lady! very pretty too. reminds me of the one I made in April one year. the snow was wet and heavy but it wasn't too cold to make a snowman and I knew it would melt soon too like yours will. good thing you took a pic. Hope things go well at the hospital
Sandra

I feel guilty saying I live in Florida! But,I paid my dues of living in New England for 42 years!

Do I really have to go out and buy gum so my eyes will not tear peeling onions? I go insane with the burning and tearing and I use onions a lot......along with the garlic. It's an Italian thing!

That snow woman was beautiful. Sorry that the snow happened as soon as you got there. Helen

Darlin' the snow didn't melt around the snow lady. She's a Southern Belle, that is the ruffle on her dress. She's quite beautiful, the only thing missing is her lace Parasol which could not withstand the high winds and heavy snow so Shirl had to improvise with that darling hat. Any southern gent should know this stuff, hahaha. Shirl you did a wonderful job, your snow lady is really cute and dainty.

So you're doing a little shivering huh? Join the crowd. I sure am glad that snowstorm bypassed us on Saturday and headed further south than they predicted. Ya know us Kentuckian's like to share, hahaha. I sure am glad YOU thought of putting the car in the garage but here's another little tip that us women DO NOT know. If you put warm water on a cold windshield you're asking for trouble, if the windshield is cold enough it will crack, somtimes shatter. I hope you didn't have to suffer through 15 degree temps this morning or if you did you had some longjohn's, hahaha. On the serious side I do hope you had enough antifreeze in your vehicles.

I know it's hard for you all to see Sonny suffering like he is. It's great that you and Sherry can be there to help and give support to the family. I hope the treatment he is receiving is working. All of you are in my prayers.

I love all the pictures but especially Shirls snow woman!!! WaY TO GO SHIRL!!!! Please Jack, do not ever live in a place where it stays below freezing or the girls will really get you. Please take care of your selves. This hospital business can be so wearing on a person. Take care, both of you. Lucy