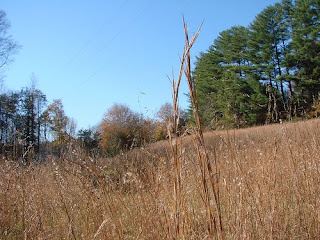 This is a wild broomstraw field, but then I guess they are all wild. I don't know where all this grows, but it is all over the South. You can take a sheet of notebook paper pierce tow straws from corner to corner in an x, leaving the long stems out the bottom. Tie sewing thread through the paper to the straws and make a great small kite that flies with sewing thread. 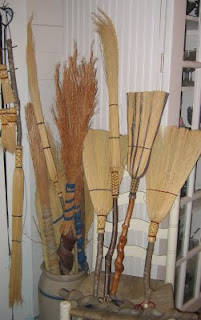 Here is a mixture of brooms. The brownest one is broom straw. they installed a handle, I never saw mother do that.

I lived in the country once. Well that was not the country, but High Shoals was so small at the time I thought it was the country. Our closest neighbors were black. Well at that time mama called them colored, because that was the respectful title. I was exposed to the ‘N’ word of course; everyone in the world is familiar with the word. It was never used around our house, you would have been safer saying damn, and damn would have got you ‘killed’ in our house.

High Shoals is where I started a fire that burned acres of broom straw field. Did you ever use or see a broom straw broom. If not here is how they are made.

Broom straw grows about three feet high. It has some loose materials near the tops that once made must be shaken or jarred loose, or you leave more trash than you sweep. I would say it takes from two to five hundred straws to make the broom. It is round. It requires some sewing. Mama used a large needle and strong thread. The straws were bunched together at the big ends (bottom of each stalk). They were bound in about a two to three inch diameter bundle. If one was made today it would be taped at the top or handle. It was actually used more as a small whisk broom. Mom bought brooms with handles from the ‘blind folk’ that made them. They sold them door to door.

As a child I wondered how blind folks made brooms. Now as an adult, I still wonder. I am amazed how some folk with a handicap can overcome it while others cannot. I certainly have extra admiration for those who can make their way in life in spite of disabilities.

I am thankful when I realize how blessed I am to have had such good health in my life time. Losing my hearing is frustrating at times, but when reality steps in, I am so grateful I had my hearing as long as I did. Life is good.

Thanks for coming this way. Every once in a while I read something that just stands out. Mary of frankandmary, had a letter of advice to a teen that was very good, yesterday or the day before.
Nite Shipslog
PS:
John Kennedy reportedly once said to an assembled group of scholars in the White House, “I think this is the most extraordinary collection of talent of human knowledge, that has ever been gathered at the White House – with the possible exception of when Thomas Jefferson dined alone."
Posted by jack69 at 1:26 PM

If I remember right at least while I am the youngest mom's brooms must have been not made with broom straw cause they were yellowish when new. Wonder how that would be to knock some sense into a hard headed mans head.????

Hi Jack...we also bought our brooms from the blind salesperson...they lasted it seemed forever...I never had a "broom straw" broom until married...and we were traveling...I saw them and bought one...a small one...didn't actually use it much...it was more for decoration LOLOL...I do believe we grewup much the same...respect began at home...as long as we remembered that...we managed!!! hugs to ya...Or
-

I used to go with my Mother and Grandmother to the broom sage fields as they called them to cut the straw for brooms. They bunched all that straw at the bottom where there were no blooms and wrapped it tightly with wide rubber bands made from old tire intertubes. They tucked the ends down into that tough straw. That made the handle. We once found a rich field of it about 6 foot tall. Those were two proud ladies. They could then sweep under the beds really well. Helen

We had those kinds of brooms when I was a child my aunt had some other kind of straw that she made brooms out of and sold to people it made a better broom than the broom sage. I can bet you had a fire with all the broom straw burning, lol. Take care and Happy Easter, jean

I lived near The Lighthouse For The Blind in San Antonio. I have so much respect for people with handicaps but plug on without complaint. My Mama was strict too. If we would even have said darn we would have "caught it".

I do remember High Shoals and the large broom
straw fields. That is where I volunteered
Church Bus for the second grade to go on a field trip Dad didn't know it until the teacher showed up. I also volunteered him to be
president of PTA. He was such a good Dad I thought he would do anything. This is where
I jumped out of the barn with an umbrella onto
hard cow patties. I hope Paula reads there
comments. I do get out of the City.


of PTA. I thought he was to good he would do anything.

Interesting story about the brooms! Thanks for sharing. I don't believe I've ever owned one
Hugs, Rose

Shirl I am amazed at your bravery. I jumped out of a hay mow after brothers were pelting us wuth rotten eggs they found. I just came in to say Happy Easter to the clan.