More Smokeys and a BIG BEAR! 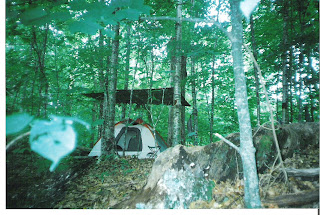 This was a campsite in our early hikes. We traded this for a much smaller (LIGHTER) real back packing tent. 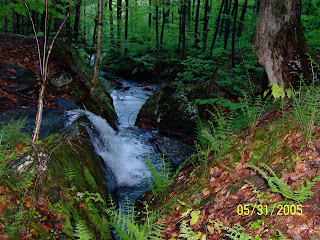 This is a beautiful water source. Some parts of the trail it is hard to find water, so you keep your water bottles full when you can. At first I did not carry a water purifier (filter) later we added one when we started fighting bugs and varmets for water.. 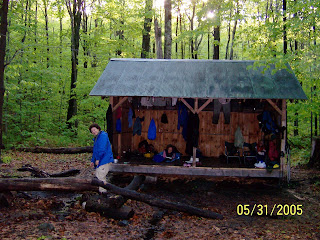 This is a shelter. They are scattered throughout the trail. Some are a mile off the trail, however. When we came to one of those, we skipped it altogether, figuring that mile in and mile out would be better spent going North. Ha! Sherry is in a sleeping bag on the right. We met these two ladies here at this shelter. The one in Blue was very active, the other preferred to read and write in the shelter. They were real nice ladies.

This was 'Moving day' (WE are in the Blue Ridge Mts for a few days).
Hiking the Smokies you meet some interesting folks. Before we reached Clingmans dome (Yesterday’s entry) we met a small group of young Dr.’s & Lawyers. They were hiking straight through the fifty miles without camping trying to break some record. They stopped by our camp fire for a few minutes to rest, find the spring, and eat a snack. About the same time we met a College girl, her brother and Father who were hiking together. She was a Fast pitch Soft ball player. She had a bat & ball. The brother would pitch to her and she would bat it back to him, they never missed.
We also met a two girls and their trainer they were training for some marathon. The girls were in great shape but the trainer had the worst feet I have ever seen in my life. I was afraid for him and they still had twenty or thirty miles to go. He had what you would call blisters on top of blisters. They had a large first aid pack and had already used all their ‘Second Skin’ covering and his feet were bleeding terrible. WE donated some ‘mole skin’ and some other hikers donated their ‘second skin’. I hurt for the guy.
Now back to Newfound Gap.
The Appalachian Trail crosses US 441 at Newfound Gap. crossing, we passed the Rockefeller Monument and started up the trail. I was reminded of a time when I was 6 years old. My dad was driving to his church headquarters in Cleveland TN. I always wanted to go because the road went through The Cherokee Indian Reservation and I always got to see an Indian in full head dress as we drove through. On up the Mt. we came to the Gap. Dad stopped and parked so we could get out, stretch and use the clean outhouses provided by the Park Service. That day we had seen several Black bears on the road, but the Gap was in a cloud, like a fog. I took off up the trail Mama called, “don’t go too far, we won’t be here long. “
Daddy said this was a cloud, I wanted to get above it and look down on it. I didn't go too far before I saw a dark form ahead, I slowed down, at first thinking it was another tourist. It WAS NOT, IT WAS A BIG BLACK BEAR, AT LEAST 30 FT. TALL (LOL) as he stood on his hind legs. This kid ran a hundred miles an hour back down the trail.

As we started North I told Sherry of my first hike here. Short & fast, LOL.

Tomorrow maybe I will get to the last half of the Smokies and the guy whose sister worked in a 'oar house'.
Nite Shipslog
PS:
Only in America.....do they have drive-up ATM machines with Braille lettering.
ALSO:
Why isn't there mouse-flavored cat food?
Posted by jack69 at 6:45 PM

I like the pictures Jack. They seem so soothing. Soothing I can use and will use. Memories can be nice and can be tough. But one day where you and Sherry are wouild be great. Not a care in the world.

As Lucy said the pictures are soothing. I bet you did run fast when you saw that bear. I like when you sign your comment with Jack and Sherry. You two go together like coffee and cream and I bet you know who the cream is.

Get me otta there when the big bear shows up. Helen

I need your help. A while back you stated that you were having problems with AOL and possibly a bug or something.

I'm receiving notifications whenever I leave a comment on my own blogs of Error 554 Notification Failure and going nuts with it.

Two other bloggers are going through the same thing. Can you tell me how you fixed your computer AOL issues??? I called their hotline, I emailed them..they only referred me to a form to fill out and sit and wait for a response.

Please advise any information you may have.

Thanks
Hugs, Rose at rjsisti@aol.com