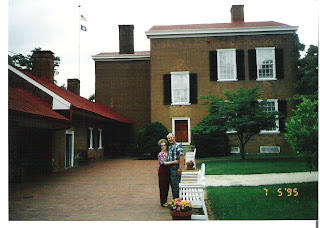 Sonny and colette with us at BArdstown, Ky. 'My Old Kentucky Home'. 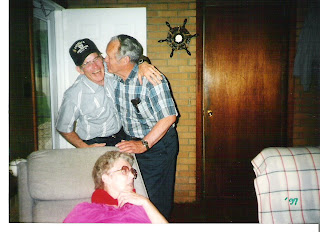 Sonny loves so much, here is giving me a kiss for Christmas. Sherry's older sister Lennie glancing back 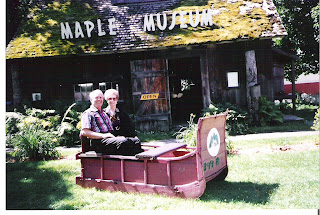 Sonny and Colette at St. Johnsbury, VT, Maple Museum. Ever have Maple Ice Cream? I love it!

Me N Sonny....
I published a book called, ‘Gracefully Grasping for Dignity’. I had several Titles in mind, and threw the subject and basic content out just to see what suggestions I would get here on the net. Debbie suggested the one I used. I moved the publication date up, especially for Sonny. I wanted him to read it. But Alas, Sonny had lost his interest in reading before it came out. Sonny was an avid reader. He read most of his life. Sherry and I read while we were on the road, keeping the best books for him. I always noted in the front of the ones I had read either F, G or VG. He always said he wanted the VG ones.

Are you compatible with anyone? I think it is unusual to be as agreeable as Sonny & I. We love Louis L’amore’s writings. We have both read everything he has ever written. He wanted a computer so he would know where we were. His e-mails were short.
“Where are you?”
“Time to come home.”
“Are you sick?” etc.
WE loved being together. We could talk for hours about nothing. Before we retired Sherry and I were fortunate to assume a loan on a house a block from Sonny & Colette. When we could, we walked in the evenings. Sherry and her sister Colette talking, Sonny and I behind talking.
Neither considered the other smarter or less intelligent than the other. We were equals, buddies. We worked together to build garages at each other’s houses. We laughed at our mistakes and had many friendly fusses. We have never once fell out or got mad with each other. Never a harsh word. At times,Both of us have dropped what we were doing and helped the other. Our backgrounds were different, our religion was different, our politics at opposite poles. I dislike unions, Sonny is staunch Union.
He loves to eat hog ears, I can’t stand the thoughts. He loves pigs feet I have never in my life chewed on one. His family drank and cursed pretty much. I never knew Sonny to drink any alcohol nor say one swear word.
“Funny thing in the hospital Sonny was hurting terrible. His daughter-in-law and grand daughter were there. A terrible pain hit him and he said, ‘shit’. Both girls said, I have never heard him curse before.”
I was raised in a tee-tottle home.. Yet later in life I did a lot of heavy drinking. As I said our backgrounds were completely different.
BUT WE NEVER SERIOUSLY ARGUED, we agreed to disagree. WE voted different, we went to different churches but never once did we argue. We were buddies.
Today on our visit, I wore a shirt with a USMC logo on it. Sonny was incoherent but I sat on the bed. I had a jacket on. He started pulling my jacket back; I thought he was looking at the shirt. He was working his arm around me, when I realized he was trying to hug me, we hugged. He squeezed me close. He smiled at me and laid his back on the pillow. I asked, “Okay buddy what do you know good?” He just half smiled shook his head, closed his eyes. He only opened them once more. The Nurse came in to get him up for therapy. He was hurting so bad he could hardly move. He held the nurses hand, his eyes pleading. She smiled sweetly at him, like I really do not want to hurt you, and said I will let you rest a little longer.
He did not look at me again during our short visit. I sat there as he drifted off into a medicated sleep and thought of all the fun we had had together. I also thought, Jack, if you live long enough this will be you.
After leaving and heading home, we were both crying. I told Sherry again. Do not do that to me. I do not know Sonny’s wishes; I can’t believe we did not talk about that. Right now he cannot make a rational decision, And he has such a close family.
Nite Shipslog
PS:
He is a good guy, thanks for the prayers, more won’t hurt.

Please leave instructions to your family, don’t leave them hanging on the BIG decisions.
Posted by jack69 at 9:27 PM

Makes me want to cry. I wish Sonny didn't have to go through this or anyone else. You and Sherry are such good friends to him.

I am so sorry that Sonny has to suffer. He always had a smile on his face and in a good mood. I was 34 when our Dad died and I still miss him.. Vickey and Steve are hurting seeing their Dad suffer. They are very close to him.
We will pray for a peaceful ending.

Sending love and prayers both yours and Sonny's way.

I feel for Sonny and I feel for his family. I feel for all of you that loce him, or like him. I can only say that if he can not ever be out of pain and it sounds like it is ahorrible pain, The family , and this is my own personal feelings, should let him go. I remember the anguish I felt after Alan decided NO MORE it would be easier for me to accept. The hardest thing I ever did was sit by him and have him tell me what he wanted at his funeral. I could not see to write cause the tears just kept coming I miss him like it was yesterday AND IT WILL BE 17years as of Dec. 21st. However he knew his own body. He chose. I don't think I could have,. We both have living wills. I am so sorry for everyone and I know how tough decisions are. Prayers to ALL.

This brings tears just reading it. I'm glad Sonny was able to give you a hug. My heart goes out to all of you. Sending love, hugs & prayers.

Just breaks my heart reading about the pain Sonny is in...so glad he was able to hug you!

I know how hard this must be on you all...wish I could reach out and give you and Sherry a hug myself!

Keeping Sonny and all of you in my prayers

(((jack))) prayers are with you my friend

and with sonny too