SURPRISE, HERE IS YOUR LIMO!!!! 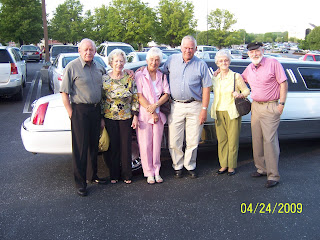 Three Well-to-do couples out slumming for the evening!! 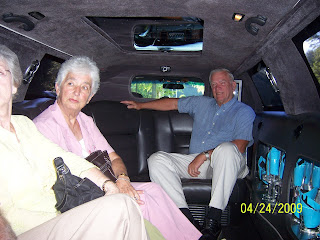 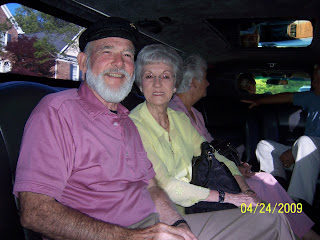 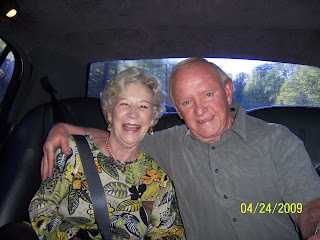 Shirl and The Smoke 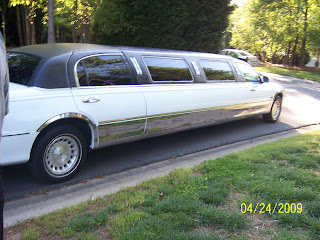 Will take a break from the trail to share an exciting tale. I have never been one for rank, position and trappings. A Thursday, while I was working on the trailer to install a heater and A/C, Sherry got a phone call from Mark our youngest son. Somehow he had a Limo for 8 hours. Told mom to get me Shirl/Smoke, and friends and take the limo out to dinner. Soooo about six on Fri evening Don & Evelyn came over, and just in a few minutes Mark drove up and was directing the limo backing down our drive.
He said have fun and enjoy yourselves and he drove off. The driver was very courteous. Shirl was at Smoke’s house. Smoke lives in the elite neighborhood of Gaston County, Cramer Mountain. We drove up and was okayed by the guard, then on to Smokey’s house. We picked him and Shirl up. We had forgotten our camera, Shirl had hers, so if I get any pictures on here, they will be from Shirl or Smoke’s camera.
WE all got a good laugh as Smoke was telling a story about the new Gate guard that wanted to be called Officer Stevens. He had contacted Smoke about his Frequent Visitors list. After awhile Smoke said he dropped off his list. The List included: Dolly Parton, Johnny Cash, The /Governor and a few more high profile names. After that he said Officer Stevens was very nice to him.
We went to the Red Lobster and had a great meal. Sherry had the limo cell phone and just before leaving she called him and he was waiting at the door when we walked out. Smoke and Don hit it off and had a good conversation.

Smoke is used to being an Emcee and has a quick and ready wit. He is a joy to be around. Shirl was pretty nice. With Smoke there, he was able to keep her from dancing on the tables, like she usually does. LOL…. All jokes aside it was a very pleasant evening.
Oh yeah, I may get this wrong but when Smoke got in the Limo he put a CD in the CD player, I think it was a parody about a White Stretch Limo. Not hearing too well I am not sure, but everyone cracked up. We tried to wave at everyone as we drove to the Restaurant. Problem is in a Limo, no one knows you are there. I had always said, if I was in there I would want everybody to know "Hey that is Jack in there!" But alas, no body knew. Maybe I should put it in the paper. LOL
We had a great evening, thanks to a gift from our Son Mark. Now Jack, the oldest son, is taking his Mom out on a date Sat. Nite to see a Show (play) or program of sorts. I am not sure which.
Soon we should be leaving to go to the mountains.
Thanks for coming by the Log.
Nite Shipslog.
PS:

***** A journey of a thousand miles begins with a cash advance.

****** Stupidity is not a handicap. Park elsewhere!

**** They call it PMS because MadCow Diseasewas already taken.
Posted by jack69 at 10:55 AM

I just heard from Mark. Wilson (the driver)said when he picked Mark and his guest up said "Mark I just had 3 of the best couples that really know how to have a good time. Mark said "Wilson they are all in their 70's. That OK they know how to have a good time. No drinking or smoking and they had a blast. Wilson said "that Comedian from Cramer Mt. is one more cool cat". The song was What a blast we had in a White Limo. It sure was.

That had to be a fun time for all. That was very sweet of Mark to give you a limo for the night. I hope Sherry has a good time on her 'date'... :) Sheila

Wow you two are living high on the hog these days. So glad you all had fun.

That was fun to read! I've only been in a limo once and I also hoped to be seen, but it wasn't happening. Yes, I agree, take out an ad in the local paper, hee hee!

A ride in a Limo, wow. Glad you all had a great time. Take care, jean

Sounds like everyone had a great time. What a nice suprise. Say Jack, have you gained weight or has Sherry lost. She is looking good. You to . Had to throw that in. Everyone looks so happy. Sounds like Shirl had a great tiome also and that is so cool, that you all got out together.

How nice that youe son did that for you. Glad that you enjoyed yourselves. Helen