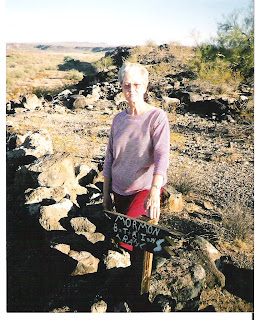 Sherry on a section of the Mormon TRail 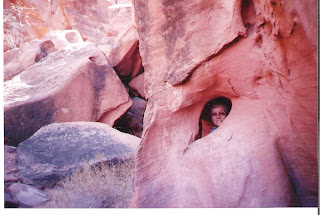 Sherry in jail or mabe 'the hole' in Southern Utah. 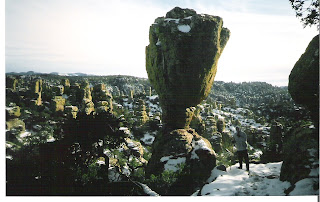 This is in the Chirachawa Nat'l Monument , near Willcox, Arizona ( Home of Rex Allen)
Today's exciting (No Math to day)
Yesterday Sherry and I had the privilege of being interviewed again by Daphne Bissette, of the Gaston Gazette. She also had a photographer. Daphne said we were interesting. She is a pretty young lady. John, the photographer, was a little older.
Do you notice how young the folks are, that are keeping this world running? Have you noticed they give kids police uniforms and a gun with bullets? I saw an officer the other day that looked like he was a junior in High School. Then I look at myself in a USMC uniform and I look like I am 15. I am amazed that I got as far as I did trying to join underage. I got to the swearing in, the first time at 16.
I didn’t mean to cause a stir on figures, I am sorry I did not give it in Kilo’s. But I had better not go back and redo it. I just wanted to point out that some things are a long ways off. LOL
I really do like the idea of space travel and would love for us to find life on another planet, and go visit. I would be thrilled to just orbit the earth, well maybe do a spacewalk also. That must be a thrill.
I know technology is great and advancing, but I wonder how fast we will actually go once we get a space vehicle that will travel in space.
I was thrilled when we lived in Missouri and we could lie out on our little deck and look at the sky. It seems the stars are so much closer in the Midwest and west. I guess the sky is much cleaner. You could see so many shooting stars and see many satellites arching across the sky.
One night Sherry and I saw a couple UFO’s, really! They were only dots in the sky, like airplanes with their landing lights on, except they made 90 degree turns and were traveling at over 2000 miles an hour by my estimation. Then I called our radar site (where I worked) and they had also seen them on the scope, I was close on the speeds. The USAF denied they existed. HA! I still wonder what they were.
Thanks for coming by the LOG
Nite Shipslog
PS:
Nobody can make you feel inferior without your permission.

I live in outer space. Will meet you half-way
when we go for a walk on the moon. I know some
people that would like to send me to the moon.
I won't get into that.

That is a pretty picture of Sherry in the hole. I have no desire to have anything to do with space. The unknown is scary to me but you go ahead. lol

Neat photos! Since moving to the country, from Montreal, I am once again in love with the sky, day and night. It's renewed my interest in astronomy. I'll be moving to Prince Edward Island next fall, and have just learned that the Northern Lights are visible on cold winter nights! I have yet to see a shooting star, I'm hope I'm that lucky!

When I was growing up on a farm we could get out and see all kinds of things like the sunrise and setting, shooting stars, and the big dipper, by looking up into the sky it was a amazing what we could see. Where we live now we have trees all around us. Lovely picture of Sherry she stays so slim and trim. Take care, jean