Northern half of the Smokies 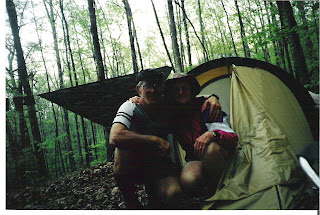 This is the samller and lighter tent we down/ or upgraded to.

We left New Found Gap after sitting on a ledge and drinking that free soft drink and eating our cheese crackers, while tourists watched us, sorta like we were in a zoo. LOL. We did talk with some folks. Within a mile either side of the Gap you see hundreds of folks out for a stroll on the AT. Once you get past the mile mark you again find quiet and calm. The views are always spectacular and as you walk the AT you do not know if you are in NC or TN, the trail goes in and out of both.

At one point we broke our own rules and walked off the trail about a half mile to a shelter. Upon arriving there was already a hiker there. He explained he was sick and was recooperating here for a few days. Any extra food would be appreciated. We had NO EXTRA food. After a little while of conversation we were about ready to hike back to the AT and pitch our tent. Then our hike was saved by a man and his young son (about 10-12) who hiked up. They were great company and we sort of ignored old obnoxious. He did chime in later and commented we did not like him because he was a Jew. I tried to ignore that too.
Later on he said, “You probably know my sister works in a oar house.” And he repeated it a couple times laughing at his own joke. The Man and son had a folding bow saw, so we took turns cutting some good fire wood and had a great fire. We love camp fires and in spite of the nasty company (who retired early thank goodness) we had an enjoyable evening before turning in.
One evening at a shelter we were the first to arrive, and I was cooking inside the shelter. This one had a half floor, the front part you could use to cook under the shelter. I had made a nice little place for our stove and had the water boiling for the Ramein noodles, when a small mouse fell from the ceiling and hit a rock within inches of the pot, nearly had meat with the noodles. LOL HE was stunned so I deposited him out in the woods. Later a Church group came and we had another very interesting evening conversing with folks from Indiana.
MET SOME COLLEGE STUDENTS AND A TEACHER FROM ATLANTA. WE WERE AROUND THE FIRE SPINNING TALES WHEN THE SUBJECT OF WALKING ON COALS CAME UP. THE TEACHER SAID HE AND SEVERAL OTHERS HAD WALKED ON RED HOT WOOD COALS (NOT CHARCOAL). HE DECLARED IT DID NOT BURN NOR HURT. WE HAD A BIG FIRE, WITH A LOT OF COALS, NO ONE OFFERED TO GIVE A DEMONSTRATION. That sorta dropped my belief in the tale.

On the eleventh day we took the Chestnut Branch Trail and walked into Mountain Mama’s and had that Delicious Cheeseburger and fries, we had finished the Smokies and were headed for Virginia.

Thanks for coming this way.
Nite Shipslog
PS:
****** Ham and eggs. A day's work for a chicken,
a lifetime commitment for a pig.

I'm sure it was fun and interesting to meet people from different walks of life but I would have been leery of that one man.

Sounds like you had an interesting group. Glad you enjoyed it though. I could not do all that stuff even when I was in shape. No woinder Sherry and you stay trim and slim. We are supposed to get a circuit breaker for our wipers today if it doesn't rain to hard to get out there. It is a good possibility it would be in the computer and in that case, could not afford to get it fixed.

I'm glad the mouse didn't make it into your noodles. I bet you do meet some interesting characters out on the trail. Take care, Sheila

I agree that if he didn't offer to demonstrate on the coals present, perhaps the story lacked veracity. Like definitely.

I love the smokies!