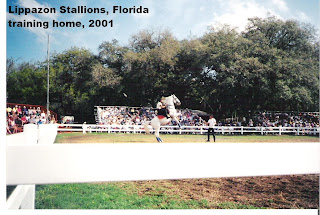 Winter home for the Lippazon Stallions, The owners credit General Patten for saving the horses from extinction during WWII 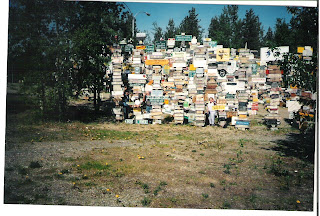 The sign Forest at Watson Lake on the Alcan highway. Many travelers carry a sign to put in the sign forest. Probably near 50,000 signs there now. It was started during the construction of the Alaskan/Canadian hignway.
Today's entry mostly guns......

Thanks to experts with guns a man is free to go home to his family and three kidnappers are not. I know our president is for more gun control, I know I am not. I do not know what the answer is, but I will look in detail durning the next few days.

I am not for outlawing guns. I have mixed feelings about assault and automatic weapons.

WE were warned:
'Those who hammer their guns into plows will
plow for those who do not.' ~ Thomas Jefferson

Jefferson was a smart man but he was not Deity. I do think there is wisdom in that statement. There are many pretty intelligent men in this country that see things in the same light. There always some pretty intelligent folk who see it in the opposite light.

Recent acts of terror and mayhem give fodder to those against citizens being armed. Many innocents have been slain in the past two months here in the United States. If guns were outlawed, could these men have caused the damage and mortal harm? Man has, since the creation, figured how to kill or maim another creature. So with explosives and unlawful guns, I think you would have the same results. WE only have to look at 9/11 to see what devastation a small box cutter can create. My plumber once showed me how to make a potato gun that would kill you. 2" PVC, potato, Lighter fluid and a match.

I am not a member of the NRA, even though I do believe in some of the statements made by the NRA.
ONE is the irrefutable fact that if guns are outlawed, only outlaws will have guns.

Do you believe the following statistics? It is hard to believe. These are the top ten countries with the highest crime rate. And the USA is not on the list..
· Country
· #1..
Iceland
· Sweden
· New Zealand
· Grenada
· Norway
· England & Wales
· Denmark

I was surprised at the list. Could it be that we have a lot of armed citizens? I do not know. I own three or four guns. I do not know where they all are. All are in storage, somewhere. I would have a hard time getting to one if I really needed it.
Thanks for coming by the log.

*** God must love stupid people; He made so many of us.

*** The gene pool could use a little chlorine.

*** Consciousness: That annoying time between naps.
***Ever stop to think, and forget to start again?
Posted by jack69 at 4:35 PM

You make a good point. I think it would be wrong to take guns away from citizens. As you say if someone wants a weapon he/she will find a way. I do wish people would be more responsible with thier weapons. A child shot himself with his Dad's gun Easter while the parents were outside hiding Easter eggs. As the sheriff said this shouldn't have happened.

as usual...you give us "food for thought"...we do not have guns...never have...but our son has a couple...but he also keeps them in a locked box...and his and his wife carry the key to it with them at all times...right along with the car and house keys...but their boys are older now...both have access to guns...and have been taught when and how to use them properly...my only thought is...parents don't take proper action and it is the youngsters who are tramatized for llife when shooting another child or themselves!!!! happy day to ya...Ora

I wish that only the armed services had the assault weapons but have no problem with ordinary citizens carrying guns. I never have and am afraid of them! I have been told numerous times that I should carry a gun when I go into the innercity to inspect homes but that isn't the answer for me. I trust my instincts and just leave when I feel danger.

I to wish only the armed services, police, and people who help save our lives were allowed to carry. I think Lou Dobbs is radical on the subject and for some reason I am suprised you are a member of the NRA however that is your priviledge. I do not like guns and I think the buzz on TV that makes it sound like the world will; come to an end if people are not allowed to have them is causing more violence, not all gun owners are as responsible as I feel you are. I know I would like to see Lou Dobbs with a gun in a rather unconventional place.

By the way, put Rush Limbaugh at the head ofd the line who eggs things on worse than Dobbs except I don't watch Fox as much.