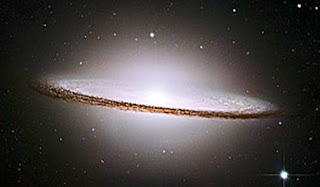 Below is the Hour Glass Nebula only 8,000 light years away 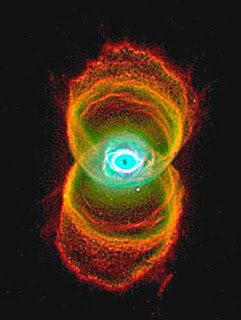 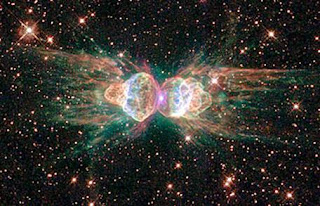 The above pictures taken by the Hubbell telescope. Sent to me by Glendy
Stick with me through some figures......

The average human cannot understand the speed of light. I remember studying in school that light travels at 186,000 miles per second. For us to think about it is mind boggling. Going sixty miles an hour means in one minute we can go a mile. Wow a mile in a minute.

While we are going that mile light has traveled:
11,160,000 miles, imagine eleven million miles then tack on 160 thousand for good measure. So while we are going sixty miles in one hour, light is traveling 669 million, 600 thousand miles.

It is roughly 92 million miles to the sun. It takes less than ten minutes for light to get to earth from the sun. If you could drive a car to the sun it would take you seven years 24/7 at 60mph to get there. So light is pretty fast.
I said all that to say this, Using the Hubbell telescope, scientists have found another something in space that is only 28 million light years away. In other words the light the scientists see now started this way 28 million years ago.

Now folks we ain’t never going there. I guess it is nice to know those facts, but even if it was headed this way to eat up the world, It is going to take it 28 million years to get here, shoot, even Lucy won’t live that long. (That’s my attempt at humor now Luce!) LOL

The pictures are beautiful, and hard to imagine those shapes and colors. But it is hard for me to think in light years.
Just thought you would like to know.

Thanks for coming by the log.
Nite Shipslog
PS:
"Action may not always bring happiness, but there is no
happiness without action."Benjamin Disraeli

If money doesn't grow on trees, then why do banks have branches?

Since bread is square, then why is most sandwich meat round?
Posted by jack69 at 2:13 PM

Geez, I'm living in metric Canada, so now I have to calculate all of that into kilometers....my brain hurts.

Thanks for this information in case I decide to
drive to the moon.

You are getting pretty deep here LOL. My brain doesn't function fast enough to keep up with you. Helen

You hit the nail on the head when you said I would not live that long. Numbers like that are making my head spin.

now i have a headache...lol

Glad you have all this info. in your head. If I ever need to know any of it I'll know who to ask. What does Sherry say about it?

Those pictures of space are incredible. Looks magical and unbelievable - or more like a light show in vegas or something. Yeah maybe that is what is really going on - the aliens have discovered neon signs! It's partyville out there. lol
No I have not been drinking. Hope you all have a nice weekend.
Sonya

I'm just going to have to take your word for it Jack. They are amazing pictures. Sheila