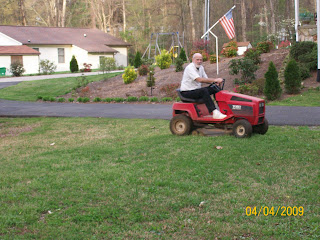 Not so bad when you have a riding lawnmower. Shirl has a good mower. 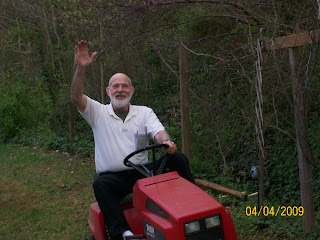 I did use a push lawnmower and the blower. Shirl is out galavanting around. She did not ask me to mow but I know she can't stand it when grass looks like it needs to be mowed. 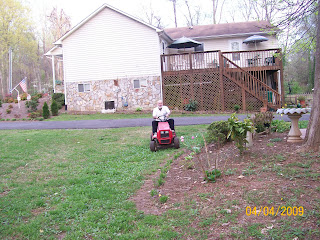 Shirl place behind me, this is an empty lot where she has made a wild area.
I don't worry about the kind of grass. I still think like I did as a kid, if it is green it is grass. HA! This is the first year the whole yard is covered with wild blue pansies. (I guess)
Survey and stuff.

Hey, we had a beautiful day here in North Carolina. Got the last door installed in the Trailer in Catawba heights.
We even washed our van and I washed one half of the motor home. Gotta get out and cut the grass now. ........... ........ So now it is late and the grass is cut, trimmed and blown clean.
I needed to talk to the neighbor, Bonnie and Clyde I mean Bonnie and Mike. We are in an area that not too many people including the city paid any attention to survey lines when the laid out the road in. I happens that Bonnie and Mike own part of our driveway. I needed their permission to pave on it. The city mislaid the road in. If I go by the lines I will be at the other neighbors porch. I would rather not pave up to his porch. Jim Arp bought the old house and I did not want any problems. He did not get a survey. He just took the sellers word for it. FOLKS DON’T EVER DO THAT. Always get a survey, you need to know exactly where the lines are according to your deed. Jim pointed out where they said they were and the points they gave are not even close. I told him I did not want any trouble, I was happy with my drive the way it is, but if he has any concerns he should get a surveyor. He said if I was happy he was.
Anyway I figured Bonnie and Mike would not care. They are dear firends. I also built their house, and the two beside them. I knew where the lines were. Bonnie teaches school and is happy about Sticky and Rags. She has read them both and I gave her some to take to her mother. She is so excited they have authorized a Bible history class in Public School as an elective. And she is to teach it. She is a wonderful Bible teacher. I did a couple programs for her years ago when she had a day care.
One surveying story. I bought a nice piece of property in Mt. Holly. I called Preston Taylor to survey it. He came to me and said, ‘Jack you have bought that lady’s drive way over there. She did not know where the lines were and had a drive put in. It would be nice if you would give it to her. I said can I afford it for side sets for my house. He said there was plenty of room. I said tell her if she pays you for surveying it and the attorney for transferring it I will do it.’ It was 12’ x120. Nice drive.
That night I received a call from the old lady’s son. He didn’t think that was enough, I should give her 14 or 16 feet. I said Mr., Her drive is presently nine feet wide, I am giving her three more feet. Take it or leave it. They took it.
My son works for me and he had to go to our construction site to check on the sheet rock hangers. He parked in her drive for a few minutes. (She does not drive and does not have a car) She came out and asked him to move his truck off her drive way.)
He said, " daddy I know it was mean,' but I told her, “ YOU are the most ungrateful old lady I have ever seen, my daddy gave you this drive way, he could have kept it, but I won’t park here any more.”
People are funny.
NIte Shipslog
PS: *** A friend told me, my husband and I divorced over religious differences.
He thought he was God and I didn't.

** Don't take life too seriously; no one gets out alive.

*** You're jealous because the voices only talk to me.

That lady was very ungrateful over the driveway. I agree about the survey. When we bought our old house in San Antonio part of the next property was fenced into our back yard and the neighbors were driving over part of our front yard. We got it all straightened out without too much hassle but it took a while. We bought that house for $4,000 cash in 1959 and when I came out here I sold it and hold the note for $32,000.

We paid 9,000 for our house about 36 years ago and have no regrets.Our alcoholic neighbor was a bit upset when a b usiness owner bought the lot ,all the way down to the corner , next to him. They cemented the whole lot and put up a nice provacy fencer and then went and got Tony to see where the,proberty line was.Tony was suprised that his aor comditioner sits on the other mans property, plus if the man wanted to be nasty all he would have to do is run the fence with inches to spare close to the house. Tony used to park all his vehicles on that mans lot thinking it was his, so the man charges 2.oo a year to Tony otherwise Tony could clainm it was his by homestead law. Soerry about the length.

Some people I tell ya...she should have been grateful you gave the drive to her and let ya use it anytime you needed!

Like the pics of you on the riding lawnmower...wanna come work for our lawncare business?...lol

Have a good week

Good pictures of you on the lawnmower are should I say mowing grass. Lol Send me your new book Gracefully Grasping for Dignity. Be sure to let me know where to send the check. I hope Sonny is feeling much better, take care, jean

Glad you cut the grass Brother. You look good
on the mower. House and yard looks good.
You can cut the grass anytime you want to. Did
a good job. I didn't have to call my yard man.

Hi Jack (waving @ ya)I like the pictures. You can come and mow my yard any time ya want. That was nice of you to mow Shirl's yard for her. Property lines can cause a lot of problems.