I trapped my first rabbit when I was 5.
Daddy helped me make a rabbit box, I put a half apple back in it and placed it on what I figured was a little animal path in the broom straw. I checked the trap everyday, because daddy said I should check it at least every two days. 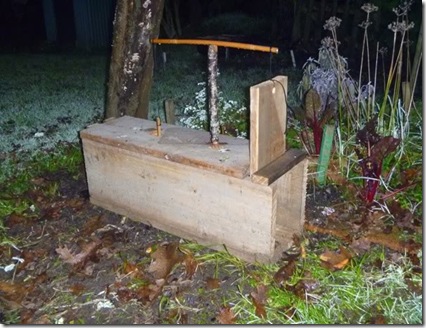 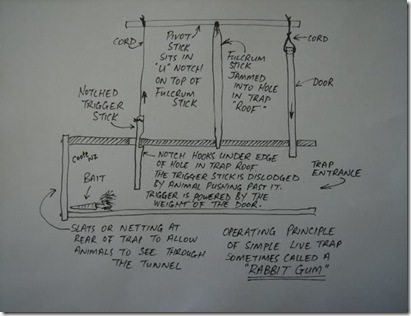 I caught one. It wasn’t a hundred yards from the house. We lived in High Shoals at the time. Daddy put a glove on reached in got Mr. Rabbit and quickly broke his neck. He showed me how to skin it, and mama cooked it right then. She fried it and make some gravy. I thought I was Daniel Boone (I did not know DB at the time, but I thought I was a pioneer) providing food for the family.  Of course I was just augmenting it. I do not remember catching another one. Mama had chickens and daddy always raised a hog. Although daddy was a preacher, that country in him and mama ran deep.
Later that year we were visiting Great Grandpa Hilly’s farm  near Toccoa, GA.  Daddy was telling Grandpa about me catching my first Rabbit. GP asked me if I had ever killed a bear? I know my eyes got big as he reached behind the stove and pulled out an old single shot .22 rifle. “Jackie, go git us some supper.” He gave me a couple minutes of instructions on rifle safety, told me never to point it back toward the farm house, winked and said, “They ain’t no bears left out there, but plenty of squirrels, that will be just as good.”

Grandpa was a Judge, you would have thought he was smarter than that, I was about 6 years old. But I marched into those woods like I was a giant slayer, of course I never fired a shot. I did not see a bear nor a squirrel.
I have been hunting a few times in my life, but none of the other times meant as much. I didn’t say anything up in Wisconsin, when Slim, Sam,Bill, Dar and Mel were showing me their trophies from trapping and hunting. I am modest and didn’t want them to feel bad. (LOL real BIG).
Yep, I guess I am old, these memories feel good. Thanks for coming by the log.
Nite Shipslog
PS:
When a person can no longer laugh at himself, it is time for others to laugh at him.
—Thomas Szasz
********************************************************
A gas station, GGrandpa Hilly would have used. 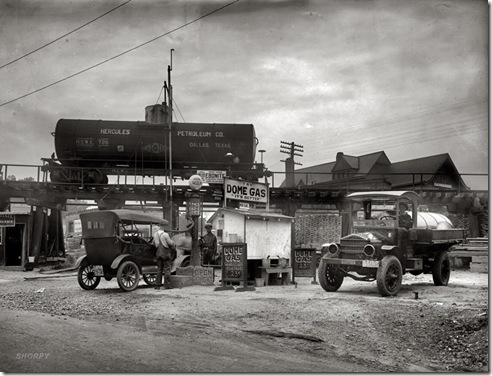 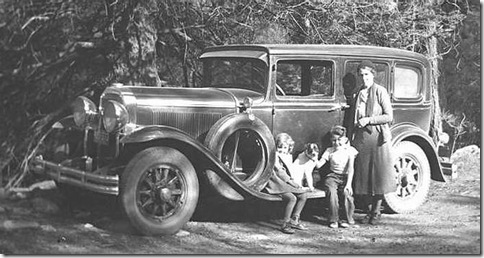 ‘31 Buick Uncle Inman would have driven to take GGpa Hilly to town.  GGpa Hilly, the Judge, preferred the mule and wagon.
Posted by jack69 at 12:39 PM

Used to fish, and my Dad pheasant hunted, but the only way I want to shoot animals these days are with my camera.

I like how your folks dressed and cooked your rabbit right away so you could enjoy the fruits of your labor. I've never fished much, but the first few fish I caught were really too little to keep. After we had to throw the first one back, I convinced Daddy to keep the next one even though it was too small. Mama cooked it with the other fish. It was easy to tell which one was mine. :-)
Do you reckon the gun was loaded when Grandpa sent you hunting?

I am back home from DS#1's now and am catching up on some posts. We did come through Ashland on our way home today. You'll have to ask those folks from Ohio if they are familiar with Grandpa's Cheesebarn. We always get on 71 headed south there when traveling to my sons, but I live up north west of Cleveland. Just had a very heavy snow coming home but didn't last long and now it's quit. Thankfully didn't have to drive in it long at all. Hope you both are enjoying your Sunday!

Do you know that in all my years of hunting and fishing I have never used a trap to catch game. Well, with the exception of turning a bucket upside down and putting a stick under one edge with a string tied to the stick. The plan was that we put corn under the bucket and backed off behind a bush and waited until the bird got under the bucket - then yank the string, pulling out the stick, allowing the bucket to fall on the bird. I cannot remember ever being successful in that venture. I think I had too little patience. Thanks for sharing this piicture and drawing of how to make that rabbit box trap. I think I might try it out at the cabin one day. ☺

I remember when my brothers and uncle made those rabbit boxes. When they caught a rabbit the family would eat it also with biscuits and gravy. Helen

John and I had fun trapping wild hogs a few years ago. Don't think we're up to it anymore. As for hunting I used to go deer hunting with Mel just to watch. Once I had a chance to shoot one with a big rack and I couldn't pull the trigger. Isn't that called buck fever? lol

Never hunted. But knew folks who raised rabbits for the purpose you mentioned. I have fished a tad bit. And been crabbing back east. Enjoyed hearing about your Daniel Boone adventures. Take care.

What I remember about G-Great Granddad was sitting around the fireplace and listening to him tell old stories. Love to here about the laws that were inforced. I think Inman was a Sheriff. He would tell about standing on the running board of a car and shooting at bandits. I wanted some of his lawbooks. I think you also wanted some. I guess his Grandaughter
got all of them. "OH WELL"

I guess learning to do whatever it takes to protect and defend your family is an important part of "becoming a man," but I think six ia a little young to be sent out on your own with a weapon.

My dad was a very "good" hunter, until I kicked & screamed & cried & carried on, pretty much nonstop & he felt badonly child thing
;-)...he quit. ~Mary

ps I will say dad always ate what he caught which I see as much different than "sport" hunting.