It seems strange to  me with the economy in such disarray that I can read ‘Senator McCrap  just raised $3 million dollars in 8 weeks. But he is way short of his  challenger,  ‘Mr. WishtobeMcCrap’ who has a war chest of $16 million raised in only 3 months.

The President is reported to have a Billion. His challenger will have hundreds of millions.

I was good at math in school, and I know these figures are not from donations of $5 & $10.

We have long past the time that Honest, poor Johnny Truelove can run for office and get elected. To be honest, it takes money to run for City Council in a small town like Belmont, NC. Do you see that sign on the side of the road about election time? It is about 18” x 24”.  That sign cost someone about $8-$10 dollars. Need a thousand of them? about $9,000. That does not count the $2,000 for stands. It is a shame that we have pushed this system to this point. BUT we have.

With the money spent this year on Politics we could shore up  Social Security.  But then no one will volunteer money for that.

At the Occupy Wall St, I saw two women, holding  signs, I am the 1%, tax me more.  I wonder if anyone actually checked to see if they were multi-millionaires.  If so, why not pool the money, bail out a manufacturing company and make jobs?  Tax on the super wealthy is a one time thing, mostly, but JOBS? last and keep on producing.

I think we get burned out on politics. Watching the news, I have to laugh, even in politics the news cannot give a positive Headline.

I wish we had another Harry Truman. Did you know when he left the White House that he drove Beth to Independence in their car? The they lived in a house that Beth had inherited. He paid for his own stamps and licked his own envelopes.  His retirement was from the Army about $13K a year.

Congress did change some of that, but not because he complained. I liked what he said about politics. “I had a choice, play a piano in a Whore house or go into politics.  It amounted to about the same thing (that is paraphrased).”

I don’t mind what Congress does, as long as they don’t do it in the streets and frighten the horses. 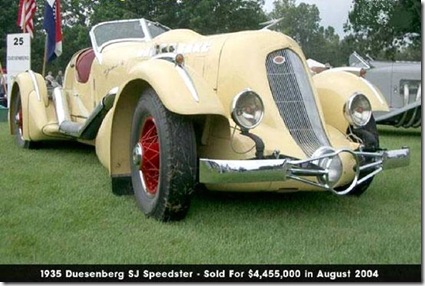 Harry Truman had it right about the choice of going into politics...its about the same...what a mess...
Here's voting for you.
Hope you and your lovely Sherry are having a nice warm Sunday. Mama is home again, feeling good, and watching football.
BlessYourHearts

That is one fantastic Duesenberg...of course the money paid for it would be extremely welcome in my bank account!

Yeah, I liked old Harry S...(and Bess)! When was the last time we had a really great president in this country...or maybe a president I thought was great? I've been voting since I was 21 and I've always voted for the lesser of the two evils. I don't expect it's going to change in my life time LOL!

Happy Sunday and a good week for you and your lady!

It remains cold and snowy here in my part of the country...what would I have to talk about if it weren't for the weather...safe subject anyway. Hope you all are having a great Sunday there!

Well hello Jack and Sherry. I am passing through catching up on your blog. I heard we had a chance of snow flurries last night so I was dancing my heart out...but nary a flake I saw... We are pretty chilly though, for a little while anyway. Take care down there in sunny FL, Sheila

OK Jack, first things first, TARRYTARE can not comment or , I think she said find blog. Robert can not comment. Truman was the first president I voted for as I reached voting age. My dad said that Roosevelt was the best one in his time. I was not old enough to really know. For once in my life I was to young for something.

Thank you, Lucy. I have been unable to access your blog Jack for 2 days. COULD not comment from my regular PC. I tried everything NOTHING worked. Different browsers, etc. Now I am using my tablet called a XOOM to try. It is like an I pad. It is a different operating system, altogether. Let us see if I can get in here to visit you. You are right about politicians having a boatload of money, spending it on the wrong things. I hope Social Security is recognized as the earned benefit that it is and not considered an entitlement. Too many of us DEPEND on that money we INVESTED in it, to see it fail.