Birds in my life

I reckon Geese are birds. I remember them when dad took us to see them at Gaddy’s Geese farm. It was a big migration stop.  They amazed me how they landed, spraying water as they glided in. When I was told this was only a resting place, I wondered where they were going. Then Frankie Lane sang, “My heart Goes where the Wild goose Goes” and I was hooked on traveling  at about 6 years old.

In Valdese, NC, I was told you could teach Crows to talk. Some of us boys climbed trees and relocated some little Crows, I got two. Took them home and fed them, but they were too uneducated on the basics, and never learned to talk. I turned them loose.

Then at 12 yrs old, I heard you could get rich raising Quail, so I trapped some and kept them until they laid and I had a bunch of little Quail. At the time I had a great dog, Ace. Aunt Anna Mae gave him to me. He was a Cocker Spaniel and went for birds like a Beagle goes for rabbits. He got in the pen and killed all my birds. Mama showed me how to clean the bigger ones and we had a Quail of a meal.

Then, I bothered dad until he bought me some Parakeets. I couldn’t teach them to talk either, so by this time I figured I was no teacher.

We still lived at Valdese, the church parsonage was about 100 ft. from the HS. It was farther to the cafeteria than our house, so Shirl and I were home every day for lunch.

The school had two mascots. A St. Bernard named Anchor, and a giant Crow named Jim. They both lived at the school, no one knew where Anchor came from, he just showed up.

There was no A/C in the school so all the windows were open in the fall & Spring. The crow would land on the window seal during class and listen.He shoulda been educated, with all the listening he had done.

We had a rash of thefts, something unheard of in the Mountain School. BUT nobody could catch the thief.

Come time to replace some of the big lights on the ball field, the electrician found a nest and  a cache of stolen articles. Watches, pens, rings etc. The thief was our mascot. You can’t trust anyone.

Jumping to conclusions, is sometimes like jumping off a cliff. 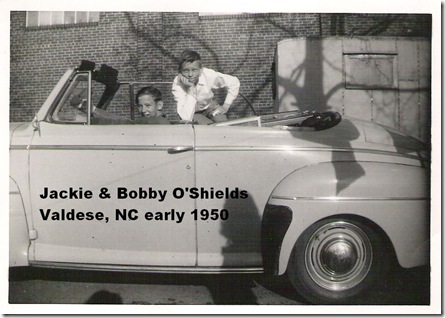 That is Bobby (My beer drinking partner) in the white shirt. His sister’s ‘46 ford convertible.

The brick building in the back ground is the HS GYM, where some of the missing articles were stolen from the locker rooms.

A quail of a lunch - you had a sweet mom - sorry you never taught a bird to talk! And you and Shirl went home for lunch - I guess you knew each other in HS. Sandie

Yes birds can be great thieves... so funny. We have aircon but rarely use it. I love the windows and doors open, but we do use screens to stop snakes and other intruders.
Stopped by from Queensland, Oz.

Great story! Brought a smile to my face!

Too funny about the mascot making off with all those things! At least it was a bird thief and not a human thief!! I guess there are some smart birds out there, I know the zoos and wild animal parks train them for shows, but I have yet to meet one :)

That is funny how that bird stole those things and put them in the nest. I've not heard of them doing that before. Good to hear that you are going to be headed for warmer climates . I just looked at the outside thermometer and it says it is 23 degrees here right now. Hope you all have a great Thursday!

Good bird stories.
Reminded me of one of the birds in my life.
I was told if I could sprinkle salt on a birds tail I could catch the bird. I tried it...lol.

Jack, you surely never ever drank a beer???. Loved the pictures and the explanations. Wonder where you are now.

We love our country living, lots of birds and we love watching them!