Treasures from the dump

Gary, http://oldboomerwoodys.blogspot.com/, from New York mentioned trips to the dump as a kid.  If that is not part of your child hood you really did miss something.

Many years ago there was not as much trash as today, dump sites were open, you drove your truck or car in, no charge and  no guard. You threw your trash on the pile. Then looked around for some treasure some one had thrown away.

Truthfully on a hot day, with no wind, it did stink. But oh, the fun of looking for that ‘something to take home’.

Back then the trash was burned, then covered over by a bull dozer. Before the closure of the last dump in Cramerton, NC, I got to know the man who was in charge of the bull dozing. That was after the burning was outlawed. He said he lived in the county and he had  two buildings 30x40, that were full of ‘Good Stuff’.  His retirement was going to be reselling that stuff at flea markets.  Now that appealed to me. LOL

That fun followed me into adult hood. Until I retired from building, when I went to the dump I always looked for something I could recycle. Americans are wasteful we talk about recycling and being conservative, but as a whole we do not.

Our fathers and forefathers were the ‘REAL recyclers’. Very little was wasted and our family trash was a small bag a week and it was burned in a barrel. Oh, did you notice our Gitmo trash can out front? We didn’t burn there, but we still used the 55gal drums. 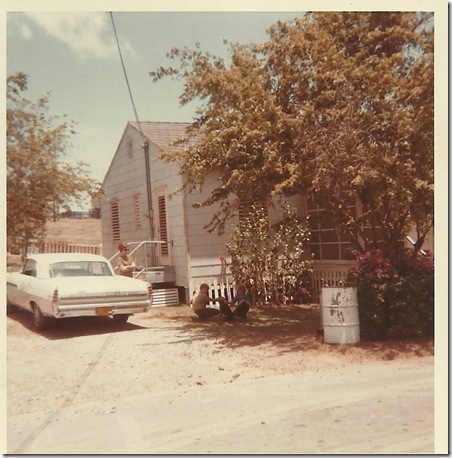 Recycling: when a shirt collar got worn thru, mama could turn that thing right over. Shoes were repaired, they were worn until not repairable, then the leather was cut and saved.

Most homes had a collection of cloth saved for rag rugs or patches. I bet my mama had a thousand buttons cut from garments. She could about match any missing button. All good zippers were saved. All scrap food went into a ‘slop bucket’ for the hogs, yours or the neighbors. All bones went to the dogs. I learned coffee grounds were good to mix with dirt for fishing worms.

Anyway, I used to have fun at the dump. Even throwing rocks at the rats.

Life has been good, most of the time I LOVE living!

Work is necessary, having a job you like, makes life good. When that combination is reached, you will know contentment. 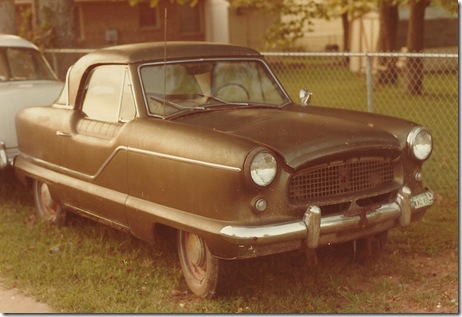 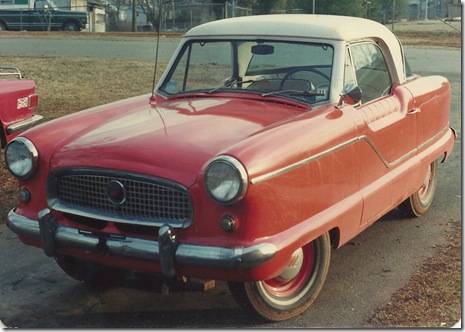 This was the last Metro I restored, this one was a Hudson. I think it was a 1957. I do not have a before and after of the other cars, but this one I just happen to have .  We loved these little cars we had two, it was powered by an MG engine.

I was totally with you and remembering things - you had me to the throwing rocks at the rats! lol
sandie

I might have said it before here and if I did, forgive me, but I loved going to the dump at times and just getting rid of things; throwing over the edge onto the pile of other things. I know the dumps we went to frowned on people looking for things to take that others had dumped (probably because they wanted the things for themselves, LOL :)

I do remember my mom cutting buttons off shirts that no longer were usable as well as then using the shirts for dusting rags or cleaning rags. Not much indeed went to waste!

I was born in a time that we saved and remade things. Nothing was ever wasted. I used to save the buttons off old clothing too. I remember going to the shoe repair shop to have my shoe heals replaced when they wore out. A lot of things were repairable that aren't any more. Now it costs as much to repair things as to buy new. Times have changed a lot. We're to have another beautiful day here, but it all goes down hill weather wise tomorrow. Hope you all have a wonderful Sunday.

We never had a dump out in the country. Not much was not saved. My grandaddy fixed the soles on shoes on his old shoe lasp. Guess my SIL still has that unless my brother sold it in his drinking days.

Like Helen we did not have a dump in the country. We had very little to dump. Mom had a huge button jar and when our shoes got holes in them out caME A CARD BOARD BOX TO CUT UP and pad from inside out. Zippers were saved. I was going to replace a button a few days ago and had to hunt for a button.

On this special day I want to say "Thank You Jack" for your Service to our Country !!

My daddy took stuff to the old coal mine but he never took me with him.

I still save and re-purpose what I can. I actually just bought 3 button boxes loaded with goodies. The Lord only knows what I will do with them. I sometimes hate that I have 'collections.' I collect vintage jewelry, buttons, antique gas lanterns, crocks, stoneware, etc. A lot of it is at the cabin, but I do use what I have. Someday I will get rid of most or pass it on. I just put a new bottom in Syrus's backpack, at his request. First 1/4 at school and he's worn it out. He's doing good in school, an A-B student. Proud of our GrandLoves.
Blessings

«Louis» remembers the first Metro he ever saw - it was in Lubbock, TX and was turquoise and white. He also remembers the TV ads for them in 1955 when the Disneyworld show was launched on TV.